If you need a monitor system that can double up for more general multimedia listening, the Exo 2.1 could be just what you're looking for... 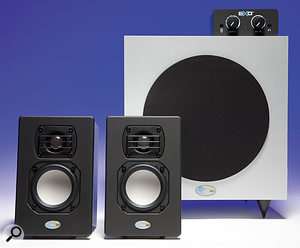 Photo: Mike CameronBlue Sky is now a familiar name in the monitoring world, and many of the company's visually distinctive products manage to straddle the home studio and home theatre markets. Their new Exo 2.1 stereo monitoring system, reviewed here, uses two relatively small satellite speakers and a floor-standing subwoofer to provide full-range coverage, with a desktop remote-control hub providing a means to control the level of the bass and the overall volume. This hub also functions as an input-source connection point, as it includes an iPod input and 3.5mm headphone jack on the front, as well as both XLR/jack combi and phono connectors on the rear. When the headphone jack is used, the speakers are automatically muted.

The Exo two-way satellite speakers are based around a three-inch Neodymium concave driver, augmented by a one-inch soft-dome Neodymium tweeter that sits behind three protective bars (the designer obviously has kids!). The crossover within the satellite is passive and each speaker is powered by its own 35W amplifier, which is housed in the sub so that all the amp and PSU circuitry is situated in one place. Speaker connections are made between the satellites and sub using conventional binding posts, and suitable cables are included with the system. The satellite enclosures are built from three-quarter-inch MDF and feature a textured, black-finish front baffle. They measure just 203 x 127 x 127 mm and weigh a modest 1.36kg each. Magnetic shielding allows operation close to old-style CRT monitors, and there are inserts to accept an optional omni-mount mounting bracket.

The rear of the remote control, which offers inputs on combi-jack and phono sockets, plus the option of a -12dB pad. An iPod input is on the front panel.Photo: Mike CameronThe sealed-box-design subwoofer uses an eight-inch speaker with a cast-aluminum frame and a 1.5-inch voice coil. This is mounted in a forward-firing position behind a cloth grille, driven in mono by its dedicated 90W amplifier. The specified frequency response of the sub is 35Hz to 140Hz, ±6dB — although the tests were done in anechoic conditions, which extends the response in a typical room down closer to 20Hz. Despite this, the sub is fairly dainty, measuring 330 x 350 x 330mm and weighing in at 11.4kg. As with the satellite speakers, the predominant material used in construction is MDF. Four removable spiked feet anchor the box to the floor.

The whole system is controlled from the hub, as mentioned earlier, which links to the sub via a captive mini-DIN cable. Here you'll find the physical connections for the input formats described earlier, as well as the 'phones output. All the inputs are always active and are effectively mixed, which means you can monitor up to three simultaneous sources if you wish. Usefully, the subwoofer level can be independently adjusted from the hub rather than on the sub itself (which is more usually the case with similar products, even though kneeling by the sub is seldom the best place from which to judge balance!). This arrangement works well, though it would have been more sensible to make the sub adjustment a screwdriver preset (or to feature some other protective mechanism), to prevent it from getting moved accidentally.

Hooking up the system is straightforward enough, and because all the amplifiers are located in the sub, you only need one mains connection. The trick is to set the sub balance so that it just fills in those lower octaves without drawing attention to itself, which seems to be somewhere between the 12 and 2 o'clock positions on the level control. Once this is set, the bass fills in very naturally. As monitors, the speakers are quite warm-sounding and not at all aggressive, almost to the point of being too restrained when it comes to revealing detail. Still, I much prefer this to a monitor that is constantly chewing my ear off! The sound gets a little boxy at higher listening levels, but bearing in mind that this is a desktop system there's enough level and enough quality to do some serious mixing at moderate levels, as well as to enjoy your MP3s, CDs or DVD soundtracks. I also like the idea of the hub, as with most active speakers you also have to budget for a separate monitor level controller/source selector, whereas here all the basics come with the package.

Now to the crunch: should you consider purchasing a system like this? If you have medium to large room and can accommodate more traditional studio monitors, you'd probably be better off doing so — because you may need more level — but if you have a desktop system set up in a small room, or share your monitoring system with the family entertainment centre, the Exo system makes a lot of sense. The price is attractive, the sound quality is surprisingly good, the sub integration is very good, and because the satellite speakers are so small, finding room for them as part of a desktop system should be no problem.

Although there are plenty of budget 2.1 systems around, I honestly don't know of any others that sound this good.

A good solution for small desktop music systems, and a big step up from most computer games speakers.