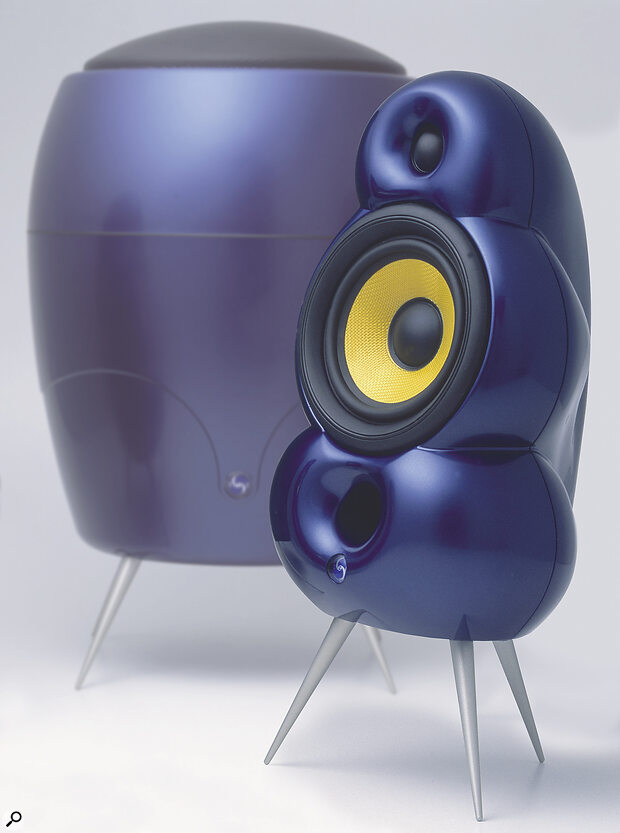 Can these unconventional plastic‑bodied speakers possibly be suitable for studio work?

Blueroom started life in the mid '90s as an offshoot of B&W, but in recent years the company has reinvented itself as a fully independent manufacturer, redesigned and relaunched the Minipods, and developed an active subwoofer. The B&W engineering pedigree is still noticeable, though, and the electroacoustic design brain behind the Minipods and the Bass Station subwoofer is Laurence Dickie, the man responsible for B&W's original, and utterly over‑the‑top, Nautilus loudspeaker.

The Minipods have made little headway in the nearfield monitor market that I'm aware of, being primarily sold through hi‑fi dealers, although Blueroom say they're ideal for the role. Certainly, this design avoids some of the pitfalls of traditional wooden cabinets. For a start, sharp edges cause diffraction that smears the acoustic energy leaving the drive‑units. Secondly, flat panels are very effective radiators of sound when excited by the mechanical vibration of the drive‑units. When you listen to a conventional loudspeaker you hear not just the drivers, but also the delayed and distorted sound added by diffraction and panel resonance. Of course, having said this, decades of engineering refinement mean that box speakers can be made to work extremely well, and rectilinear shapes are far more efficient containers of the necessary air volume than curved shapes.

A Minipod's curves are constructed from two 4mm‑thick painted ABS mouldings bonded together along a joint line that runs vertically around the body. The front moulding carries a five‑inch magnetically shielded and Kevlar‑coned bass/mid‑range driver, a 25mm soft‑dome tweeter and a reflex port. The extravagant shape of the front provides generous diffraction‑suppressing curves around the drivers and turbulence‑delaying flare around the port. The port is also flared internally. The back moulding simply carries a pair of bare‑wire or 4mm‑plug connection terminals that work pretty well. The lightweight construction feels somehow inappropriate for a serious loudspeaker, especially in a world where thick, damped wooden loudspeaker panels are commonplace.

The Bass Station, while not possessing quite the head‑turning looks of the Minipods, is still a pretty unusual shape for a speaker, having something of the appearance of an Eastern percussion instrument. It is a substantial circular reflex enclosure with a top‑mounted 10‑inch driver and a port that vents downwards. As with the Minipods, construction is from two painted ABS mouldings. Again, shape provides the rigidity that would not be present were the same material used to make a flat‑sided box. The port flaring on the Bass Station is probably the most extravagant I've ever seen and can do nothing but benefit the performance. Port turbulence is, perhaps surprisingly, a significant limiting factor on reflex‑loaded subwoofers. The problem is that the diameter of port required to keep the air flow linear means that the length then needed to achieve the necessarily low tuning frequency won't physically fit inside the enclosure. The usual solution is to reduce the diameter (and consequently the length) and just shrug shoulders at the resulting distortion and compression. Blueroom's efforts to solve the problem on the Bass Station, through the use of such generous flaring inside and out, is unusual and suggests there's some thoughtful engineering going on.

Bolted to the 'back' of the Bass Station enclosure is a 75W amplifier module that carries the subwoofer inputs (including high‑level inputs on bare‑wire terminals), a phase reverse switch, a level control and a low‑pass filter control. The combination of these controls endows the Bass Station with the versatility to integrate with satellite speakers other than the Minipods, but their primary purpose is to provide adjustment for fine‑tuning the system to different rooms, setups and tastes.

The overriding impressions on firing up the Minipods alone are of clarity and an absence of typical box colourations. I suspect the clarity is partly down to the combination of well‑controlled bass and slightly emphasised upper mid‑range and high frequencies, but there is a definite sense of openness and detail that is very revealing of the source and, if the material is good enough, very seductive. The imaging too is exceptional, with a great feeling of acoustic space around voices and instruments — ideal for comparing reverb programs.

It's not all perfect though. There's a subtle tonal character that the Minipods occasionally seem to add to the lower mid‑range and, in monitoring terms, the slightly bright balance might lead to slightly dull mixes. For example, I found myself reaching for a de‑ess plug‑in on a mix that had previously managed without when I was using my usual (admittedly slightly dull) nearfield monitors. The balance is one that's well within the realms of acceptability and usability, however. Perhaps a more significant issue for some would be that the Minipods are small loudspeakers, and are naturally limited in overall level. So no thrash metal mixed at 11...

The Bass Station subwoofer does everything you'd expect and, with the right material, completely transforms the sound of the Minipods — effortlessly adding that missing octave below 70Hz or so and turning the system into one of very wide bandwidth. The Bass Station does not, however, increase the maximum possible level of the system. As the signal fed to the Minipods is not high‑pass filtered when the Bass Station is used, the limit is still that of the hard‑working bass/mid‑range drivers.

Used with the Minipods across two different rooms I was never really happy that I'd found the best settings for the Bass Station level and filter controls. I kept wanting to go back and adjust them. This most likely reveals a fundamental truth with subwoofers — there's often genuinely little signal in the band below around 70Hz, so we shouldn't expect to be aware of it all the time. But maybe it also reveals that the satellite and subwoofer concept is generally not really suited to nearfield monitoring.

I'm not entirely convinced by the Bass Station for monitoring applications — partly because it adds nothing to the maximum level capability of the Minipods, and partly because using it made me wonder about the wisdom of such systems. The Minipods and Bass Station together offer a system with the bandwidth of main monitors, but without the ability to play similarly loud. There's no doubt for me, though, that the Minipods make the grade as a nearfield monitor — a pretty good illustration of the significance of the shape of a loudspeaker enclosure over its material. For anything but the loudest material they are a revealing, engaging and useful speaker. And, of course, they look just great...

Blueroom proves that serious working speakers can be curved and made of plastic, rather than square and made of wood. The Minipods work well as seductive, revealing nearfield monitors. The Bass Station, while doing the job it sets out to do very effectively, isn't really as appropriate for nearfield applications.