Crystal Glasses Volume 2 is my favourite type of sample library: one that starts with beautifully recorded sounds that have a real‑world feel and then extracts the last drop of creativity from them using clever programming. Dennis Burns introduced the soft, bell‑like tones of crystal glasses some years back in 16‑bit mono format, and very nice they were too, but his latest release is in another league. 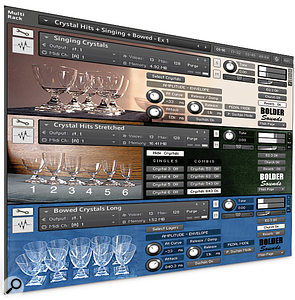 Volume 2 features six different sets of 10 crystal glasses captured with the extra delicacy of 24‑bit stereo, along with round‑robin variations and a host of articulations. In total, there are 49 Kontakt instruments that access the modest 480MB of sample data. The 60 glasses have been mapped across the keyboard in various combinations: two‑octave instruments for the purist who prefers to hear the glasses at their original pitches, and four‑octave 'stretched' versions for those who are amenable to some reality warping.

The custom user interface and scripting of the Kontakt version provides a huge amount of tweakability across its five pages, offering panel or key‑switched control over multiple crystal layers, plus a fully variable attack and release envelope, various sustain and damping modes, three‑band parametric EQ, width and pan, as well as a choice of various convolution and algorithmic reverbs.

The library is divided into six folders. The Crystal Hits/Soft Hits offer great delicacy and variety, with the added realism of the round‑robin samples, and have been coaxed into wonderful variations, such as Multis formed from multiple instances, where the various players can have their relative timing and tuning adjusted in the Humanize section.

Next up are Singing Crystals, employing the classic 'wet finger on the rim of the glass' technique to create a wonderful sustained tone. Once again, there are various key‑switched multiple-layer options, but Dennis hasn't stopped here, also offering examples with rich, interval‑tuned crystals, pulsed envelopes and combinations of both that are reminiscent of chordal steam whistles. The Bowed Crystals folder offers yet more variations, but this time with the more aggressive attack offered by a cello bow. Once we reach the panoramic movement of the pads in the Granular Crystals folder, we're starting to push the boundaries using granular synthesis techniques, yet these scintillating instruments remain very musical and glass-like.

The Crystal Morphs folder features a collection of multi‑instruments with either singing or granular layers that you can cross fade between using the mod wheel. The movement possibilities here are simply tremendous, morphing across timbres and jumping octaves, with some stunningly original gong and singing bowl‑like textures. The final folder is Crystal Combos, where everything comes together in complex layered confections of hits, bowed, singing and granular pads, and yet more unique sounds.

I've used a lot of superlatives in this review, because I think it deserves both them and our highest, five‑star, rating. If only all libraries offered this many new sounds and this much creative potential!