Impressions: Jazz Construction Kits from Big Fish Audio does exactly what it says on the tin, offering just shy of 2GB of 24‑bit content organised into 62 construction kits, with a further 1.6GB of additional multitrack drum loops. What it doesn't say on the tin (or, rather, the DVD packaging) is that auditioning the loops can give you fantasies about George Clooney (although perhaps this is just me?). I'll come back to this later… 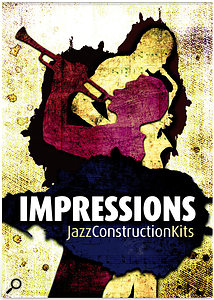 While the musical content is organised into 62 construction kit folders, these 62 kits are actually grouped into 12 related music compositions, identified by the use of a letter within the folder names. For example, five kits are grouped under folder names with an 'A', all of them were originally recorded at 120bpm in the key of C, and they can easily be fitted together to create the different sections of a complete musical composition. Within each individual kit, there are usually five or six loops featuring drums, bass, rhythm guitar, piano and a solo instrument or two, which might be guitar, piano, a vocal scat, trombone, flute, sax or clarinet.

While each construction kit features a pre‑mixed drum loop, one novel feature of the library is the inclusion of the multitrack drum parts. These include separate loops for hi‑hat, kick, snare, toms, overhead and room mics. You can, therefore, re‑mix the drums or create breakdowns to add further variety to the playing, which is a very useful addition.

So, back to my George Clooney fantasies. From the first moment I started experimenting with these loops, all I could think of was how well they might suit a sophisticated romantic comedy with Mr Clooney in the lead (most likely playing an international jewel thief who falls for the smart but down‑on-her-luck casino croupier). The up‑tempo, teasing, twinkling lightness of 'Sophistication' (and its related kits) would be great for those 'driving around the sunlit city in the expensive convertible' moments, the mid‑tempo 'Lemonade' would suit the 'first date' montage, with the happy couple laughing over dinner, and 'Steaming' would work as our hero rapidly executes a precision heist.

I hope this doesn't sound too flippant — it is certainly not meant to — because this is beautiful jazz with bags of character, mostly straight down the line, but with the occasional touch of a funk, blues or Latin influence. While I'm sure the library will appeal to jazz players who want some nice backings to blow over, I suspect  a more obvious target will be media composers wanting an easy route to some sophisticated and utterly convincing jazz cues. Impressions: Jazz Construction Kits is as cool as Mr Clooney himself.