Like many '60s practice amps (which sounded great, but suffered from excess hum and noise), Bugera's V5 is about as simple as a valve amp can get, with one 12AX7 dual-triode preamp and an EL84 providing the class-A output stage. The V5, though, has a much more solid, grown-up sound, and can sound good at relatively low volumes. The rectifier is solid-state, and there's a realistic digital spring reverb, with none of the noise or vibration-induced 'sproinging' of a physical spring. 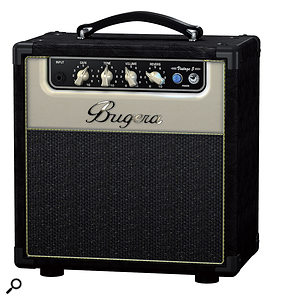 The simple tone dial seems to control a top-cut filter, and in full-power mode (of which more below), with the main volume set to a moderate level, the input-gain control only goes far enough to introduce a gentle break-up on single coil pickups, or a more pronounced bluesy tone with humbuckers. At lower levels, it provides a very credible clean tone.

The most interesting feature is the power attenuator, which can be used to set the amp to 5W, 1W or 0.1W modes. In full-power mode (5W), power-amp saturation starts to make a significant contribution as you crank up the volume, but by this stage the amp is pretty loud! Switch to the 1W mode and you can push the power stage harder, and achieve a wealth of blues overdrive tones at a much more manageable level. The 0.1W mode brings saturated vintage-rock tones within reach, and despite the tiny power rating, it's more than loud enough for recording.

The eight-inch speaker produces the throaty, mid-heavy sound associated with small, open-backed combos. It lacks the low‑end punch of a 12-inch speaker, but you can plug into a separate cab for more 'big amp' depth, and when recording, a cardioid mic close to the grille will let the proximity effect lift the bass end. While miking up gives the best results, there's also a frequency-compensated headphone output for silent practise or DI recording, taking the speaker out of the equation. Being picky, there's a tiny amount of residual grit in the speaker-emulated tone that might benefit from a speaker modelling plug-in or high-cut EQ, but the results are as good as you could hope for from this kind of filter circuit. I was pleasantly surprised at the lack of hum and hiss, but note that the headphone output isn't affected by the power attenuation switch. Also, to keep the level sensible, you have to work with the volume at a low setting, so there's no power-amp distortion.

I couldn't quite coax my preferred Vox AC30TB 'jangly edge' sound from this combo, even with the tone control at its brightest (fully clockwise), but it does deliver a raunchy crunch tone reminiscent of ZZ Top, as well as being a very nice blues amp with the warm and responsive sound that only valves seem to give. In short, then, the V5 is a great way to begin recording your guitar using traditional miking methods. What's more, you could easily pay more for an overdrive pedal than this amp costs — which makes it quite a bargain! Paul White