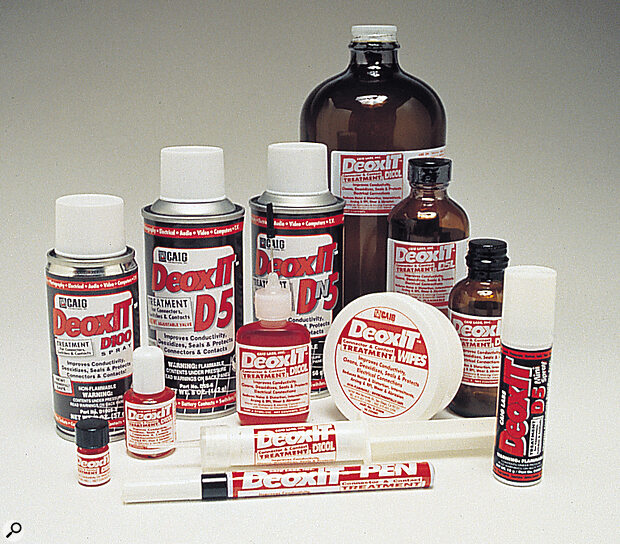 As studio systems become more complex, analogue signal degradation caused by poor signal connections becomes a serious problem, especially in vulnerable areas such as patchbays. Conventional contact cleaning sprays often make the problem worse, because many use a sticky, greasy formulation which attracts and traps dust. A better solution is to use one of the more advanced contact enhancement treatments such as Tweek, Stabilant 22 or Deoxit, the last of which is under test here.

Deoxit claims to improve conductivity by cleaning away thin films of surface oxide and by preventing further oxidisation. It is not sticky or oily, and unlike some of the very expensive contact enhancers, it is cost‑effective to apply by spray, though it also comes in applicator pens and as pre‑soaked wipes.

For general‑purpose use, Deoxit comes as a 5% solution in what seems to be an alcohol base. However, it is possible to buy a metered dispenser of 100% Deoxit as well as full‑strength wipes, syringe dispensers and pen applicators. For the purposes of this review, I used the Deoxit D5 Mini Spray, which contains 20ml of 5% Deoxit powered by a CFC‑free propellant. I also tried some of the wipes, which are very convenient for treating jack plugs and similar exposed connectors.

Intermittent patchbay connections are a fact of life, especially if you use budget quarter‑inch jack patchbays, but wiping or spraying the jack plug with Deoxit prior to insertion cures most problems instantly. Dirty normalising contacts are a bit trickier to treat, as you need to get behind the patchbay and spray directly into the contacts, but this again brings about a rapid cure that seems to last for a long time before treatment is needed again. Other areas that benefit from Deoxit cleaning are guitar jack sockets and the phono connections on the back of DAT machines and soundcards. It may even be beneficial to treat the earth pins of your mains plugs as a low‑impedance ground path is vital to effective screening.

For gold‑plated connectors, Caig Laboratories have developed ProGold, which is a little more 'tweaky' than Deoxit. The benefits are similar, but in addition, ProGold claims to be able to penetrate the microscopic pores found in thin gold plating, allowing it to bond to the metal beneath, and preventing corrosion building up between the base metal and the plating. Tarnishing is prevented, and as with Deoxit, there's a full range of applicator types and a choice of 5% or full‑strength solutions. Again, I tested it with a 20ml Mini Spray and some wipes. The immediate benefits are similar to those of Deoxit, and in the case of badly tarnished connectors, the difference in audio quality can be quite noticeable. ProGold could be usefully applied to gold jack sockets, gold phonos and circuit board edge connectors, although it is important not to spray any kind of cleaner in the vicinity of a capacitor mic capsule due to the extremely high impedances involved.

Given the effectiveness of these cleaners, Deoxit in particular should be a part of every studio owner's survival kit. Inexpensive sampler kits of both ProGold and Deoxit are available containing both 20ml sprays and wipes. Paul White