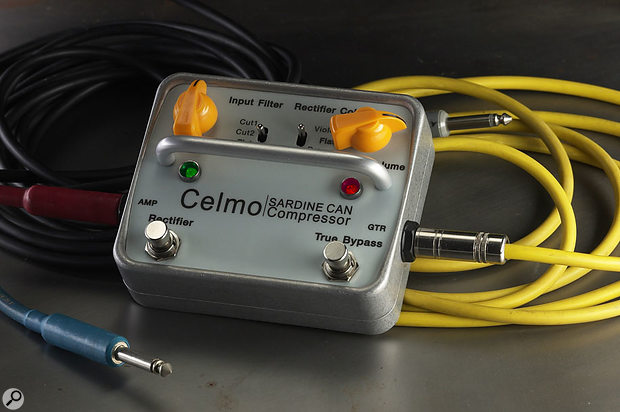 You might have heard of the French company Celmo already, as they were behind many of the software plug-ins for the Creamware DSP platform, but I've recently been testing two of their entirely analogue guitar pedals, and these are something quite different!

Sardine Can Compressor: This is based around an optical compressor that delivers a very smooth sustain, which is ideal for those faux pedal-steel guitar licks, but Celmo have also added a second section with its own bypass switch that adds what they call 'soft crunch drive', complete with various switchable tonal colour options.

Powered by a 9V battery (access to which entails unscrewing the base plate), or a Boss-style 9V power supply, the die-cast pedal sports two foot switches with red and green LEDs for Bypass (which is a true bypass) and Rectifier. A pair of rotary controls set the amount of compression and the output level. The left footwitch brings in the soft-crunch Rectifier part of the circuit, and also activates the two tone switches. The leftmost three-way toggle switch introduces a choice of two different low-pass filters at the input stage, with no filter applied in the third position. Another three-way toggle switch to the right selects the tonal colour of the compressed signal, with flat being the centre position. Here, the tonal options seem to be to make things a little brighter or a bit darker, the options being labelled Violet and Brown. When Rectifier is active, the output level increases by about the right amount for a solo, and the sound takes on a gently overdriven sound that works for bluesy things, or for adding just a hint of character to a clean amp. This is very subtle and is most evident on humbucking pickups — with single coils the sound warms up nicely, but the distortion itself is barely noticeable.

While the Rectifier section can only be used with the compressor — it can't be used as a separate effect — the combinations of tone available via the two switches is useful, and the crunch effect isn't so overpowering that it gets in the way. However, it's the compressor that most makes me like this pedal, as I love the way it stretches out the notes in a very fluid way, without choking the life out of the attack or turning it into an unappealing thud, as many stompbox compressors tend to do. At very high settings, you can hear the sound swelling back in after the initial attack, but there's plenty of range to suit all styles: country players will like it, but it also works well for blues or soft rock. 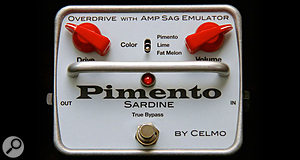 Pimento Sardine Overdrive: Housed in a similar box, the Pimento is an overdrive pedal that also includes emulated valve-amp sag. Amplifier sag is a dynamic effect caused by the power supply voltage dropping when loud notes are played, and the effect is in some ways similar to compression, pulling back the note attacks and adding a sense of sustain. A three-position Colour switch adds three quite subtle tonal variations: the Pimento position adds a hint of sharpness to the upper mids; Lime emphasises the highs a little more; whereas the Fat Melon position boosts the lows slightly, while also taming the extreme highs. Other than these and the rotary Drive and Volume controls, there's just the bypass footswitch with its red status LED.

Once you've selected the desired option, the pedal is used just like any other overdrive and it covers a very wide tonal range, from mildly dirty at the lower settings to pretty extreme rock mayhem at the other. Classic rock poses no challenges, and the sound cleans up usefully as you back off the guitar volume control — but maybe not quite as much as with those pedals that are designed to dish out more levels of overdrive. Although the degree of sag can't be adjusted, it feels fairly natural and creates a sense of power at lower volumes, making this a good pedal for use on solos. These pedals, then, may not exactly be cheap, but they do exactly what their makers claim.