To really put this system through its paces, we set it up as the main system at an outdoor festival playing to thousands of people. 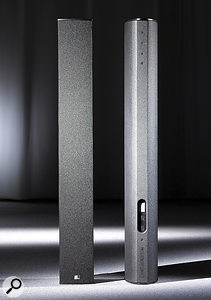 Described by German manufacturers Fohhn as a 'hybrid line array', the LX601 is a passive, two-way speaker system configured as a line-source column. It comprises six long-throw, neodymium-powered 6.5-inch drivers and four one-inch compression drivers. The benefits of line arrays are well known, the main one being the wide-but-shallow dispersion pattern that puts the sound where you want it and not where you don't. Such speakers also provide a longer 'throw' than conventional boxes can, due to the sound levels not dropping off with distance as much as with conventional 'box' speakers. This is because the wavefront from a long column is cylindrical, rather than spherical, as with traditional speakers. The LX601 has a quoted horizontal dispersion of 100 degrees, but a vertical dispersion of just 20 degrees, which really helps keep sound away from the ceiling.

The 'hybrid' part of the speaker designation comes from the way that only the cone drivers are arranged as a true line array, so some clever engineering was needed at the HF end, which here is handled by separate tweeters feeding what Fohhn call their horn-loaded wavefront converter or HWC. This produces a vertical and slightly curved cylindrical wave from the four individual one-inch HF drivers, to more closely match the natural dispersion pattern of the vertically arrayed cone drivers.

With a massive nominal power handling of 1000W per box (4000W peak), these speakers weigh just 29kg each, so if you store them in one of the optional bags, which have wheels at one end, they are easily manageable by one person — at least until you encounter steps! The LX601s are also fairly sensitive, with an output of 101dB for 1W at one metre, and the maximum SPL is a very hefty 136dB. They cover the frequency range 75Hz to 20kHz, and so rely on a sub to fill in the bottom octave or so.

The slim birch-ply enclosure, which is finished in a tough textured coating, is only a little wider than the drivers themselves, and includes integrated handles on the top and bottom, as well as one in the centre of the rear panel. Overall the measurements are 195 x 1500 x 238 mm (WxHxD). A specially designed bracket (the optional SA8) that locks into the lower rear of the speakers allows them to be mounted on a tripod stand, where a fine tilt adjuster, complete with angle markings, aids in aligning the speakers. Threaded inserts conforming to the rigorous German standards are included for permanent installation or attachment to flying rigs.

A degree of weather resistance is afforded by the use of impregnated speaker cones, and connection is via a pair of paralleled Speakon sockets, allowing the signal to be looped through to another speaker system if necessary. A perforated metal grille protects the speakers, and this is fronted by a layer of acoustic foam around 10mm thick, which gives the speakers a blacker-than-black 'stealth' look.

For this review, Fohhn's UK distributors supplied us with an XS30 active subwoofer, which can also provide power to two passive tops. Power for the LX601s can also come from a Fohhn XS4 subwoofer, or the company's D2 1500 power amp. Like XS4 and D2 1500, the XS30 has speaker management built-in. You can run the LX601s from third-party amplifiers, however, as the tops have passive crossovers and electronic HF driver protection built in.

On the rear panel of the XS30 is a menu for selecting the required speaker preset. When loaded, this sets the appropriate crossover, EQ and limiter parameters for each speaker. One sub can either be set to drive a single top in mono, or two tops in stereo, the latter arrangement reducing the power available to each top. As I already had one XS30 as part of my own rather more modest system, for this review I used a single XS30 and LX601 per side, giving us a total of 1.5kW per side, with around 700W going to each top. 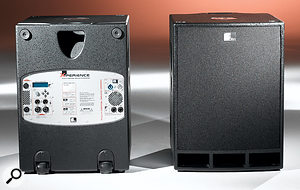 We gave these speakers a fairly challenging test by using a pair of them for the main PA on the main stage at the annual Malvern West Fest event, an outdoor one-day festival with three stages, held on a very large sports field able to accommodate several thousand visitors. We had a couple of extra powered subs available for if needed, but in reality the XS30s alone were well up to the job. I must say the LX601s looked a little lost at the sides of the stage where you'd normally expect to see stacks of boxes, but then our aim was to have the speakers sound good, not look scary! The only other speaker we had facing the way of the audience was a large passive Fohhn floor monitor belonging to fellow sound guy John Hewitt, which we repurposed as a front-fill speaker for the benefit of those audience members crowding so close to the stage that they didn't derive the maximum benefit from the LX601s on either side. We've done this on previous years and found it works well.

The festival turned out to be in the middle of the extended hot spell this Summer, so we rigged up 'sails' to keep the direct sunlight off the subs as they risked becoming too hot to touch. We ran through the soundcheck the night before the event using playback from an iPod, and the sound was every bit as hi-fi as I've come to expect from Fohhn. There was plenty of level, excellent clarity and we could set the vocal mic levels really high with no hint of feedback.

Come the day and the heat soon built up to the extent that many of the audience members opted to stay in the beer tent at the opposite side of the field, where they could get some shade. The PA soon attracted positive comments, with those in the know saying that it sounded almost as loud over at the beer tent as it did standing in front of the stage — a testimony to how well the sound of a line array carries. The day didn't go entirely without glitches though, as the power amps in the subs muted on a few occasions as their protection circuits kicked in. They only cut out for a second or two, however, and thankfully not at the same time, but we increased the level of the centre speaker and added a second powered speaker so that if it happened again the audience would be less likely to notice.

Speaking to Fohhn's engineers after the show suggested that the problem was almost certainly caused by rapid voltage fluctuations in the generator output due to beer coolers being run off the same generator, albeit on a different phase. Apparently they've found that these devices can cause a momentary drop in the generator voltage of as much as 40V. It's just for a few milliseconds as the coolers switch on, but that is enough to trip the fast-acting self protection in Fohhn's switching-mode power supplies, which monitor the incoming mains voltage. We had asked that the audio system have its own generator, which would have avoided the problem, but when it comes to festivals and generators, what you actually get is not always exactly ideal!

The centre Fohhn speaker and the stage monitors had 'analogue' power supplies driving their amplifiers and so didn't trip, as their smoothing capacitors held enough charge to get them over the brief voltage dips. We couldn't complain about this behaviour, though, as the Fohhn's self-preservation circuits were doing exactly what they were designed to do, so the moral here is to be extra careful when driving any switching-mode PSUs from a generator. 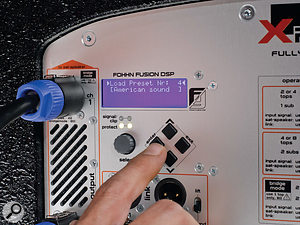 The XS30's rear panel has a menu that allows you to select various presets for its internal amp and crossover, depending on the speaker configuration you're using.

Though we didn't push the speakers anywhere close to their maximum SPL level other than during the soundcheck, the sheer volume of pristine sound was still most impressive — and from a PA system that was all but invisible to the audience. Vocals came over with great intelligibility, the integration with the subs was very smooth, and there was none of that fatiguing edge often experienced with less sophisticated systems.

The other side of the equation, of course, is that Fohhn gear is expensive when compared with the typical gigging band's PA, though it still stacks up well value-wise against anything in the same performance league. It is designed and built in Germany with the focus on quality before cost, but it is also designed to have a long life and to be serviceable, so viewed as a long-term investment for a regularly working band, hire company or venue that needs quality sound without bulky boxes, it is still an attractive proposition. Though relatively new, LX601-based systems have already been adopted by several hire companies as they can provide what the client needs while needing a smaller vehicle and a smaller crew than usual.

Fohhn's subs are some of the lightest around, so a two-sub rig is still reasonably portable and will fit in an estate car or even a large hatchback as long as you can put the seats down to accommodate the length of the columns. If the compact format means you don't have to buy a van, which will depreciate much faster than the PA system will, then that might go some way towards balancing the books.

One consideration is that, unlike box-based systems, there's no easy way to expand a line array of this kind other than by adding more subs (and possibly a centre-fill speaker) as you can't just stick two line-array boxes side by side, since that would affect their dispersion pattern, and they are too tall to stack vertically. Multiples would be practical in some types of fixed installation that require distributed sound, but not for typical gigging venues. Having said that, I can't think of many 'bring your own PA' gigs that a pair of LX601s and a couple of XS30s couldn't handle — a 2000-seat venue would be no problem. We didn't even have to crank our review system up full to cover a crowd of around 3000 people! To sum up then, this system offers extraordinary performance in an almost unbelievably compact package, but as you'd expect, this level of quality comes at a price.

Compact line arrays are by no means unique to Fohhn, but this is the only one on this scale I've come across that delivers this level of performance.

If you can afford it this is one of the best-sounding, loudest PAs you can fit into an estate car. The line-array format is visually unobtrusive, and will ensure the sound only goes where you need it to.