Mainstream PC builders Chillblast have made an impressive debut in the music computer market. 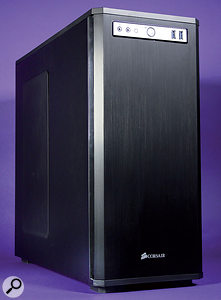 Chillblast are an independent UK‑based company that are new to SOS, but not to the mainstream PC world, where they have already won various awards and plaudits for their desktop machines. They offer a wide variety of PC systems, covering activities such as photo and video editing, music production, media playback, home office, gaming and flight simulation, and even have a range of silent systems that may be of interest to the musician on the move, including the 'totally silent' Fusion Vacuum Mini PC, with no moving parts other than its Blu-ray/DVD-RW drive. 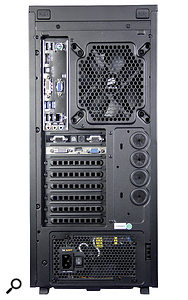 Most of the Artiste Mozart's connections are found at the rear, with just two USB sockets mounted at the front.

I was impressed by the understated, yet stylish black Corsair Obsidian 550D case, with its steel and brushed-aluminium construction, and especially by its comprehensive lining of acoustic foam, front-panel on/off switch and two USB ports. I was initially concerned that you could possibly decapitate dongles or USB sticks currently plugged in here when opening the front door, until I discovered that it was hinged on both sides (very clever engineering!). Moreover, Chillblast are unusual in offering a selection of cases among their customising options, so if you'd prefer a particular colour of Fractal Design R3 case (for instance) you can choose that instead.

Inside, the review PC was as neat as any I've seen, with impeccably dressed cables, lots of empty drive bays (I counted five internal and two front-panel bays still available), and plenty of unused motherboard slots still available for future expansion. These include all three PCI slots and one PCIe slot (one of the latter was already occupied with a passively cooled Nvidia GT520 graphics card, and a second by the RME audio interface I'd specified for my review testing). One advantage of Intel's new Z77 chip set on the Asus P8Z77-V LX motherboard is native USB 3 support (no more third-party chips required).

However, the most significant component choice in this review system was the Intel 3770K Ivy Bridge processor. The latest IB CPUs are notable for being the first to feature 3D Tri-Gate transistors, which have incredibly thin, three-dimensional, silicon fins that rise up vertically, with a gate on both sides of the fin and a third on top. Using this approach, transistors can be packed even closer together, enabling Intel to shrink the die manufacturing process from 32nm to 22nm, which, from a practical viewpoint, means enhanced performance and increased energy efficiency. When running flat-out, Ivy Bridge power consumption is reduced by a quoted 19 percent compared with Sandy Bridge processors, which, in turn, means that they are easier to keep cool. For musicians, the end benefit is likely to be lower acoustic noise in Ivy Bridge systems.

IB processors also incorporate significantly improved integrated graphics performance (up to 60 percent better than Sandy Bridge), which also makes them an excellent choice for the latest slim Ultrabook format PCs, although most desktop audio PCs are likely to continue using budget graphics cards like the one in the review system.

The German-built Bequiet power supply lived up to its name, largely due to its large but slow-spinning 135mm cooling fan with fluid dynamic bearing, and the Seagate 1TB audio drive is reputed to be the quietest drive on the market at the moment, especially sitting inside a Scythe drive silencer. This manages to do its job without increasing drive temperatures, by using thermal pads to transfer the drive heat away. With a healthy 8GB of RAM, a speedy but totally silent Solid State Drive for the Windows 7 Home Premium 64-bit operating system, and a Samsung Blu-ray drive (the quietest Blu-ray player on the market), this specification augured well for the noise-conscious musician! 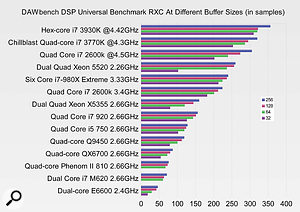 Acoustic noise levels were, indeed, extremely low when the PC was idling, with the majority of the remaining noise emerging from the rear case fan, where it would be further silenced when placed under a desk at floor level, as it would typically be. My 100 percent CPU torture testing caused the processor core temperatures to rise from a very modest 30 degrees Centigrade to a highish 70 degrees Centigrade, along with an acceptable increase in rear fan noise, although both temperature and fan noise dropped back within a few seconds once this test had been stopped.

Since one of the claimed Ivy Bridge improvements is its lower power consumption, I decided to investigate this, and even including the RME audio interface fitted for review testing, my measurements bore out the IB claims, the overall system consuming a modest 60 Watts when idling, and just 146 Watts during my torture tests. A 2600K-based Sandy Bridge system will have a similar idling power consumption, but is likely to consume a considerably higher 170W flat-out. We can safely assume that Ivy Bridge is, indeed, easier to keep cool and quiet.

Memory Bandwidth, at 21GB/s, was on a par with both of the 2600K Sandy Bridge machines I've reviewed in the past, while the various CPU Arithmetic and Multimedia results were, again, in the same ball park as an overclocked 2600K I reviewed in SOS June 2011. However, as always, while mainstream benchmarks are useful, nothing is really as useful to the musician as the performance of a PC actually running a project full of audio tracks and plug-ins, so once again I wheeled out the trusty DAWbench test.

Over the last few years, the DAWbench DSP Universal test has enabled me to directly compare a wide variety of systems, not only noticing incremental improvements as clock speeds and core numbers rise, but also any feature that particularly benefits audio performance. The most significant example of the latter occurred when Intel's first Core i7 series was first introduced, as it displayed a big improvement at low latency settings, particularly with 32-sample settings at which previous machines (even high-powered dual-Xeon-based ones that could hold their own at higher latencies) plummeted in performance, to the point of not being very usable. For the last couple of years, the second-generation Core i7 2600K Sandy Bridge processor has become a favourite with specialist audio PC builders and musicians, also offering excellent low-latency performance, along with reliable 'overclockability', but now we can finally compare this with the third generation of Ivy Bridge CPUs.

I can report that this Chillblast 3770K Ivy Bridge system overclocked to 4.3GHz edged into the lead ahead of its Sandy bridge 4.5GHz Turbo-boosted rival in my audio tests, albeit only slightly. At larger buffer sizes, where differences in audio interface performance pale into insignificance, revealing CPU differences more clearly, the improvement was just five percent (managing 320 Reaxcomp plug-ins compared with 305), and increased to eight percent with 128-sample buffers (295 compared with 273). The lead was a much larger 20 percent and 25 percent with 64- and 32-sample buffers respectively, although here audio interface driver efficiency can make more difference, so I'm reluctant to draw hard and fast conclusions without using the same audio interface in both systems for my tests. Nevertheless, even a five to eight percent audio improvement is well worth having, especially in conjunction with the Ivy Bridge lower power consumption, making it easier to keep audio PCs cool and quiet.

It's getter increasingly difficult for system builders to carve their own niche in the specialist PC Audio market, but Chillblast already seem to be doing it with panache. This Mozart review system turns in a powerful performance with a particularly low acoustic noise level at a very competitive price; a killer combination for the musician who wants to run plenty of plug-ins and soft synths and lots of audio tracks, yet wants to record acoustically in the same room as the PC. Add their excellent build quality, lots of expansion potential and an exceptional warranty package, and it's safe to say that Chillblast PCs are likely to be appearing on many musicians' shortlists in the future!

As I finished writing this review, many specialist builders had still not incorporated Ivy Bridge into their range, but those quicker off the mark include Scan 3XS (http://3xs.scan.co.uk) in the UK, with their competitively-priced 3XS SI77 PowerDAW system, while in the US, ADK Pro Audio (www.adkproaudio.com) now offer Ivy Bridge in their Quad Pro model, and PCAudioLabs (www.pcaudiolabs.com) in their Rok Box MC 7x series.

Each Chillblast system is custom built in-house by a systems engineer, has extensive tests and quality control checks, is then optimised by a software engineer, and then finally undergoes at least 24 hours of stress testing before being shipped. Chillblast PCs also come with an exceptional two-year collect and return warranty, with lifetime local rate telephone support, while customers also benefit from out-of-warranty upgrades or repairs with subsidised collection/delivery/labour charges and discounted part costs.

The Chillblast Mozart PC offers a sophisticated and stylish combination of cool and quiet running, powerful performance, a very competitive price, and an exceptional warranty package. Ignore them at your peril!