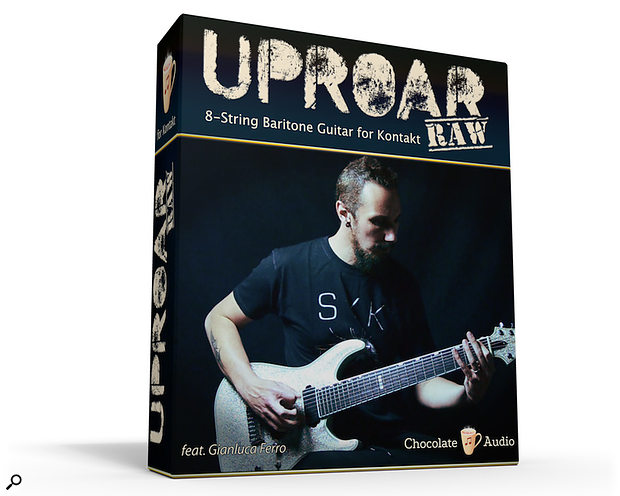 According to urban legend, an Irish theatre manager once bet his mates that he could add a new word to the English language within 48 hours. The wily manager then instructed his employees to go out and chalk the word ‘quiz’ overnight on shop doors and walls throughout Dublin. It being Sunday the next day, all the shops were shut, and everyone going to and from church saw the word and repeated it; thus, ‘quiz’ was heard all over the city, the manager won his bet, and a new word was duly coined.

To nail the Djent sound, you really need an eight-string guitar played through a bi-amped high-gain guitar rig. This formula is faithfully adhered to in Chocolate Audio’s Uproar RAW 8-String Baritone Guitar library (3.64GB installed), a collaboration between company founder Simone Coen and Gianluca Ferro, who performed the samples on his own Custom ESP 8-String instrument. An accomplished guitarist himself, Mr Coen won a five-star SOS review for Imperial Drums XL (marketed by Scarbee), going on to supply high-quality sounds to numerous third-party companies before setting up his own tastily named outfit in 2006.

Optimised for Djent-style low-end power rhythm guitar parts, the Uproar RAW Baritone Guitar library spans two octaves from F#1 to F#3, with up to six round robins per articulation. The guitarist’s two boutique amps are presented as separate ‘rude’ and ‘rough’ signals along with a third clean DI channel, which can be used for re-amping and/or processing with external plug-ins. Each of the three channels has its own independent volume, pan, mute and output controls.

While the sound of two overdriven amps panned to opposite sides of the stereo is extremely powerful, the noise gets even bigger when you dial up Uproar’s double-tracking emulation: this adds a second, three-channel layer of alternative takes, creating an instant double-tracked effect which can be enhanced with built-in detuning and delay controls. In the same vein, optional internal ‘Haas’ processing pans the two layers left and right and delays the right channel by up to 40 milliseconds, producing a wide, huge-sounding stereo image.

Uproar RAW’s articulation list is impressively comprehensive. There are 32 styles in all, including sustains with varying vibrato intensities, legato sustains (including a ‘slide’ option where the finger slides to an adjacent fret, which I found hard to differentiate from a regular legato semitone interval), palm-muted chugs and dead notes, ghost notes, and an entertaining ‘X-Ghost’ metallic noise produced by strumming quickly on the top strings while they’re muted with the fretting hand, which brought to mind Andy Partridge’s frantic rhythm guitar work on early XTC tracks.

To help users lash these articulations together into authentic and realistic power guitar parts, there’s a dedicated articulations page where you can assign up to 10 playing styles and keyswitch between them on the fly. Each articulation has a second, velocity-switchable play slot, so you could (for example) assign palm-mute chugs to one slot and sustains to the other, enabling you throw the occasional accented long note into your chug passages simply by playing harder — like most things in this library, the velocity switch point is user-definable. Also provided on this page is a cool ‘note repeat’ function which triggers an automatic repeat when you release a note, thus making it easier to perform the trademark Djent super-fast tremolo picking style.

Immediately playable straight out of the box, this library also offers some useful tweaking features to those with an ear for fine detail: to tighten up your rhythm parts, you can reduce the level of the release samples (the string-release noise that automatically occurs when you end a note), and/or use the pre-attack control (which sets the global sample start time) to non-destructively trim off the initial pick attack sound. Dedicated to creating ‘raging and furious’ low-end power rhythm guitar tracks, Uproar RAW is a great way of achieving that exciting, brutally smashed-up Djent racket, which stirs the blood of young rock fans and superannuated Sound On Sound reviewers alike.

Also available from Chocolate Audio is the Choco-Matic Series, two volumes of construction kit guitar loops featuring Gianluca Ferro thundering out double-tracked power riffs with his Uproar RAW guitar sound along with a pair of reverberant clean guitar tracks (one of which is substituted by a synth part on some phrases). The two volumes (the first 1.02GB installed, the second 1.94GB) contain respectively six and seven phrase collections, each of which features up to seven stylistic variations presented in a variety of user-selectable tonal centres, with amp and DI versions of each part and a set of programmable effects. Though somewhat limited in scope, these volumes are musically inventive, atmospheric and occasionally inspirational, and when harnessed to a rock drum beat (as demonstrated in the walkthrough video), the low-end licks sound positively monstrous. All three libraries require the full version of Kontakt 5.5.2 or newer, and will not work with the free Kontakt Player. Dave Stewart