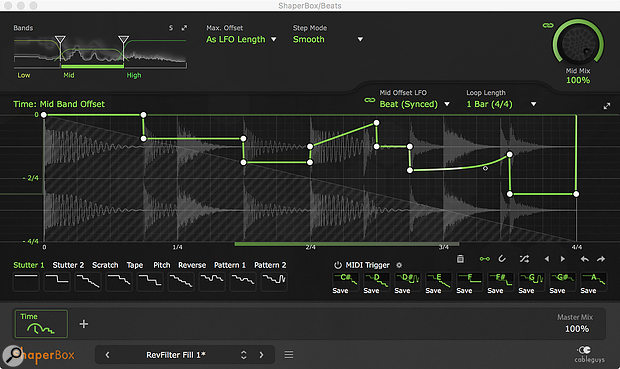 Cableguys’ neat plug-in lets you alter the fabric of time itself — or just make cheesy tape-stop effects. The choice is yours...

German software company Cableguys have been producing high-quality plug-ins for more than a decade now. The excellent Curve 2 synthesizer is probably their best-known product, but they also make a raft of well-designed, inspiring audio effects. What makes their plug-ins stand out from the crowd are the excellent modulation options, quirky takes on more standard effects and a quality collection of presets bundled with each product to get you on your way quickly and, most importantly, creatively. All of this can be said of TimeShaper.

Simply put, TimeShaper is a time-based modulation VST and AU plug-in that does everything from beat displacement to stutter effects, repeating patterns and fills. It is equally at home with scratch effects, tape stops and reversed sounds, and offers some innovative pitch-shifting effects into the bargain. TimeShaper runs within ShaperBox, a global hosting framework that is used to house all of Cableguys’ modulation plug-ins. The other effects that, if purchased, come under the ShaperBox umbrella are VolumeShaper 5, PanShaper 2, WidthShaper and FilterShaper 3. Within ShaperBox, one instance of each plug-in can be activated in whatever order you choose for elaborate sound-shaping shenanigans.

At the core of TimeShaper is a low-frequency oscillator that can be locked to the tempo of the hosting DAW session, with loop lengths ranging from 1/128 right up to 32 bars. By default, the plug-in is set to a 4/4 pattern running for one bar, which makes sense, seeing as TimeShaper is primarily aimed at (but not limited to) dance music producers. Most users will no doubt run TimeShaper in sync with the host tempo, but there’s also the option to set the loop length in Hertz, in which case it spans 20Hz to 5.24kHz. For the more adventurous producers out there, these audio-frequency modulation speeds can make for some inventive synth-esque sounds.

The central part of the interface is taken up by the expandable time-offset window, or the Curve Editor as Cableguys terms it. Here, users can draw in the amount of time offset by clicking to create lines or single points (depending on whether or not Step Draw mode is activated in the right-click menu). The simplest way to explain how it works is to feed in a 4/4 beat, with kicks on beats 1 and 3 and snares on 2 and 4. Drawing a horizontal line over beat 2 at the -1/4 mark (as shown on the Y axis on the left-hand side of the window) will result in the first snare on beat 2 being replaced by the kick on beat 1. This change is also reflected in real time in the overlaid waveform, which now displays three kicks and one snare.

Step Mode is the quickest and simplest method of creating stutter and repeat effects: the horizontal lines drawn in this mode displace audio in time but don’t change its playback speed. Transitions for Step Mode can be set to Smooth or Instant, with the latter being better at preserving transients at the risk of pops and clicks. For the most part, leaving it on the default Smooth setting is recommended, and the overall sound is superb, with no noticeable degradation of the audio quality.

Things start getting really interesting when the points are adjusted to make the lines slope upwards or downwards, which produces pitch changes over time. An upward sloping line will therefore result in the audio speeding up, while a downward sloping line has the opposite effect: the audio slows down as the offset lengthens over time. Add curves into this equation and you can see how crazy things can start to sound. For instance, you can create scratch-like effects as if a turntable is being dragged back and forth, while tape-stop effects can also be achieved by having a curve slope towards the diagonal grey line: any time the green line runs parallel to the grey line, audio is stopped entirely. And if the green line slopes down at a steeper rate than the grey line, the audio is reversed, again with the slope of the curve/line changing the pitch over time.

Here’s One I Made Earlier

If all this sounds a little confusing, have no fear. There are 72 simple presets in eight categories for getting the basis of an intended effect up and running quickly. Therefore, there are categories for Stutter 1, Stutter 2, Scratch, Tape, Pitch, Reverse, Pattern 1 and Pattern 2, each of which contains nine presets to show off the different types of effect. If you just spend a few minutes going through these presets upon first trying out the plug-in, it all becomes very intuitive. Even more company- and user-supplied presets are available if you use the plug-in while connected to the Internet, although many of these extra presets use multiple ShaperBox plug-ins, so may require both TimeShaper and FilterShaper, for example.

Up to nine patterns can also be saved into the MIDI Trigger area of the plug-in, which then allows users to trigger the various patterns from a keyboard, or otherwise program pattern changes in a MIDI editor. The patterns are mapped from left to right onto C#, D, D#, E, F, F#, G, G# and A, and they can be switched any time, regardless of the loop point. What’s more, there’s no need to search for the right octave, as all C#s across the keyboard, for example, will always trigger the first MIDI Trigger pattern.

One of TimeShaper’s other main strengths is its multiband functionality. This enables users to utilise up to three different patterns at the same time, one acting solely on the bass frequencies, one on the mids and one on the trebles. The arrows on the expandable spectrogram in the left of the device can be dragged across to set the desired frequency crossovers for each band, with the option of a 6dB or 12dB cut across the transitions from low to mid and mid to high. Each band has an independent Mix control, too, for blending the effected sound of each band with the dry signal.

In essence, then, TimeShaper offers three separate playheads for different frequency bands, providing a precise way to manipulate beats, vocals and loops. The multiband aspect is particularly useful for changing kick patterns while leaving snares and hi-hats alone, for example, or vice versa. It can also be used for adding subtle ghost notes if only part of a sound’s frequency is affected by the plug-in — if, say, only the lower parts of a snare’s frequency range are stuttered.

One final thing to note is that there is no manual for this plug-in, as Cableguys believe their plug-ins are easy enough to understand by simply playing around with them. Having said that, clicking on the Cableguys logo does provide detailed information on precisely how to edit a wave, including all the time-saving shortcuts for editing multiple points at once, for example. There is also contextual help available within the plug-in by mousing over the majority of the controls, plus there are some very good tutorial videos on the Cableguys web site. These will get you up to speed quickly, as well as having the added benefit of showing off some of the creative potential of TimeShaper.

While this is not the first plug-in of its kind to mangle time or create pitch-based effects such as scratch and tape-stop sounds, it is one of the easiest to control and it often yields superb results much more quickly than other plug-ins, in part due to the excellent presets. Once you understand the way the lines and curves for each band work, this plug-in is simply a joy to use and is packed with creative potential. And there’s one more thing if you still need convincing: the price is remarkably low for such a well-made, fun and inspiring plug-in, making it feel like a no-brainer for electronic producers and remixers. At the very least, the fully functioning demo version should be considered a must-try.

Though it is perhaps not as well designed as TimeShaper, MeldaProduction’s MRhythmizerMB offers not three but six frequency bands, and it has a built-in sequencer for manipulating the time offset, volume and filtering of your loops and beats. And for those looking for something a little more twisted, check out Audio Damage’s Replicant 2: it produces randomised stutter and glitching aplenty, but also throws in some simple delay, filter and panning effects. 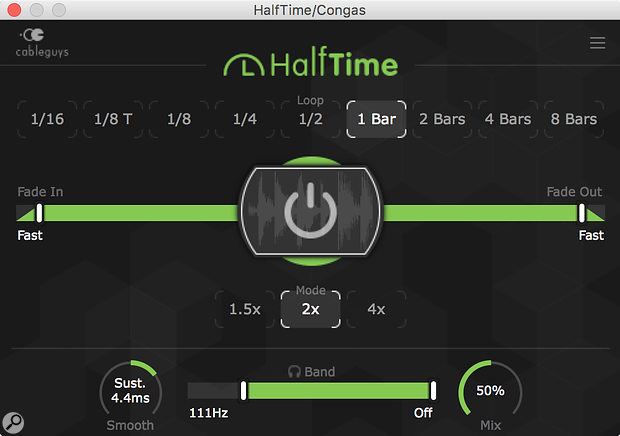 New Cableguys plug-in HalfTime has been spun out of TimeShaper to supply users with one of the most commonly requested sounds: the half-time effect often used on vocals and beats in hip-hop, trap and grime. HalfTime runs alone, without the need for the ShaperBox rack, and is extremely simple and fuss-free. Load it onto a track and it’s automatically set to cut the playback speed in half over the duration of one bar, resulting in the pitch dropping to create those deeper, darker vocal sounds, elongated drum hits, and so on.

But it doesn’t stop there. HalfTime is actually a great plug-in with which to experiment, whenever you’re stuck for ideas or when you’ve heard the same loops over and over and are feeling jaded. Thus, the loop length can be adjusted from 1/16 to eight bars, and the playback speed can be reduced by 1.5x (for perfect fifth harmonies and triplet grooves), 2x (for the classic half-time effect) or 4x (for super slo-mo, glacial sounds). There are Fade In and Fade Out controls for ensuring that your transitions are as abrupt or smooth as you like, in addition to a dedicated Smooth control, for either maintaining transient hits from the source material or for eradicating any clicks or pops that might occur. Then there’s the Mix control, which can be used to blend in the original sound with the effected one, which adds some creativity and nuance to the plug-in. Last but not least, the frequency range of the effect can be limited with a band-pass filter.

Overall, then, it’s a deceptively simple plug-in for a popular trick used in urban styles, but it has a few extra bells and whistles not included in TimeShaper for those wanting more control over the sound. Best of all, HalfTime is extremely affordable, so those looking to achieve this effect in a very easy-to-use and surprisingly inspiring package need not worry about the cost.

TimeShaper does exactly as its name suggests, in real time. It’s an incredibly well-designed multiband plug-in, which uses Cableguys’ unique LFO drawing and curve editing tools to quickly and easily create stutter, glitch, repeat, reverse, scratch and tape-stop effects. On top of this, a superb set of presets and the ability to trigger patterns over MIDI make TimeShaper well worth checking out.