If you like the convenience of software bass but want a highly realistic sound, Chris Hein's lovingly sampled bass instrument could be just the ticket... 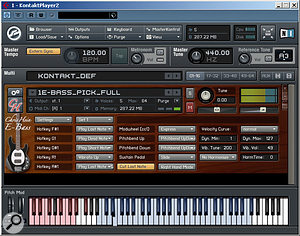 The music technology world is not short of sampled and synthesized emulations of electric and acoustic bass guitars. However, if you depend on virtual sound sources for your bass needs (and don't have an A–list session player as a close friend), there are relatively few products at the top of the food chain. This is particularly true if you need ultra–realistic sounds with plenty of performance options.

Chris Hein, who will be familiar to regular SOS readers through his highly regarded Horn and Guitar sample libraries, has now expanded his virtual instrument collection to include electric and upright basses. So if you are looking to plug a bass-shaped hole in your own sampled instrument collection, is Chris Hein Bass worth a virtual audition?

CHB is supplied with the familiar NI Kontakt Player 2 as its front end, and can therefore run as a VST, RTAS or AU plug–in, or as a stand–alone virtual instrument. We've reviewed a number of other products that use the Kontakt interface (and, indeed, reviewed the full version of Kontakt in the July 2005 edition), so there is little new to say about this part of the package, other than that it follows the usual installation and copy protection procedures. The sample library itself contains some 20,000 individual samples and comes in at nearly 13GB, so do allow a little time (and enough disk space) for installation.

Six instruments are provided: three electric basses (Pick, Slap and Fretless) and three acoustic uprights (Steel, Nylon and Gut, referring to the string types used). The high volume of samples is because of the large number of velocity layers (up to eight) and performance articulations (up to 42) provided. This means that individual instruments can be fairly demanding on RAM but, fortunately, a number of 'light' versions are provided for each bass, which use various combinations of fewer velocity layers and smaller articulation sets. For example, the full 'picked' version of the electric bass requires about 290MB to pre–load sample material, while lighter versions can reduce this down to less than 50MB.

The range of performance articulations is particularly impressive. In addition to sustain and short notes, other articulations include slides, muted notes, strums, falls and flageolet style. These can all be accessed via keyswitches and the keyboard layout can be configured in a right–hand or left–hand mode, depending on the user's preference. In addition, five 'hotkeys' provide additional performance options, such as stop, squeak or strum noises or modified vibrato. A variety of controls (all of which can be automated via MIDI controllers) are also provided to add further realism to performances. These include Expression, which seems to change the brightness of the sound, and the Bridge/Center control, which simulates movement of the player's picking hand and, therefore, influences the tonal character of the sound.

If all this isn't enough, Harmonise, Unison and Chord modes are also included. The first of these provides various musical intervals and the simple Unison option is great for adding extra 'girth' to the sound. The Chord mode engine is lifted directly from Chris Hein Guitars and, while perhaps less obviously required in a bass context, works very well and provides an interesting range of strumming possibilities. The engine is rounded off by a fairly standard set of effects options, including reverb, delay, chorus, phaser, flanger, compression and three–band parametric EQ.

On paper, then, Chris Hein seems to have made excellent use of the functionality offered by the Kontakt Player front–end and, considering that there are only six basic instruments provided, the level of sampling is very comprehensive (or lovingly obsessive, depending on your point of view). Of course, this is only so much fluff if the instruments don't sound good and the performance options are not easy to use — so how does CHB sound and how easy is it to play? Fortunately, the answers to these two questions are 'very good indeed' and 'relatively easy given a little practice'.

The ADSR controls page includes options such as Squeek and Stop Noise for added realism.

As with a real bass, a touch of compression can really smooth out a CHB performance.Of the three electric basses, the standard picked instrument is probably the most versatile. While it has lots of bottom end, the default sound has captured a wide range of frequencies and there is plenty of energy in the mids and at the high end, if required. This is also true of both the Slap and Fretless basses. The attack of the slapped instrument has a lot of character and, while the slapping is not overdone, the more generic picked instrument will work in a wider range of musical contexts. My first impression of the fretless instrument was a little underwhelming, mainly because the degree of 'fretlessness' is actually quite subtle (none of the obvious pitch variation you might find in a bog–standard 'fretless bass' synth patch). With a little more use, I began to warm to it and found it to offer a very playable, solid performance, with a character distinct from the other two electric basses. The combination of sounds here could easily cover a wide range of musical styles, including rock, funk and pop.

The basic character of the three upright basses is equally impressive. Of the three, the Gut version is my personal favourite and sounds full, with an aggressive attack to the notes. By comparison, both the Nylon and Steel instruments seem to have a somewhat softer attack. All, however, are full of character and would make a great choice for jazz styles.

For those familiar with some of the more up–market orchestral libraries, the multitude of keyswitching options provided by CHB might not be too intimidating but, like all such systems, it does require some initial practice for real–time use. That said, the practice is worth putting in, as the ability to mix in slaps, slides, hammer–ons, pull–offs and muted notes (amongst others) adds significantly to the realism of the parts that can be created. Used within a suitable DAW, keyswitch options could, of course, be added as a second pass once the basic part had been recorded. CHB also has a further trick up its sleeve. Hidden away within the various other control options is the ability to randomly add variable amounts of finger noise such as buzz, squeaks or 'stops' — and these can add an excellent touch of realism.

While the wide frequency range of the samples gives an excellent, full sound to all the basses, sometimes the style of the music or the density of the mix might require something a little more specific. In these cases, the three–band EQ provides plenty of control if you need to cut something away so that the bass can fit in a specific place in a busy mix. Equally, if you want a huge bass to dominate a sparse arrangement, CHB provides the tools to do just that. The Expression and Bridge/Centre controls provide further ways to alter the tonal characteristics, either in real time via a MIDI hardware controller, or via automation. For the upright basses, the Acoustic/Electric control allows the player to choose a blend between a microphone and a pickup signal.

The various effects provide a worthy selection of further possibilities, and for bass the usual chorus, phaser and flanger options work well (including the rather interesting 'talkbox' option in the phaser section). However, the cream of the crop is the compressor and, once I engaged it, I was almost surprised that it wasn't used by default in the preset patches. The 'classic' compressor mode seems particularly effective and turns an already impressive bass into something even more solid.

While I'm more than comfortable with an electric bass in my hands, once I had spent a little time familiarising myself with a few of the keyswitch articulation options, I'd certainly be happy to substitute a CHB part for my own playing. The quality of the sounds is very high and, with a little work, it is easy enough to add the realistic touches required to create an utterly convincing bass performance. CHB does, of course, knock my non–existent ability on the upright bass into a cocked hat.

Compared to the obvious competition, CHB is perhaps a little more expensive, but it also provides some of the most detailed sampling of electric and acoustic basses currently available. Kontakt provides a tried-and-tested front end and, with the combination of articulations and other means of adding performance realism, it is difficult not to feel that CHB represents good value for money. If you think your music deserves one of the most realistic virtual electric and acoustic bass instruments currently available, it's essential to check out Chris Hein Bass.

There is a small number of specialist virtual bass instruments that can be considered obvious competition to Chris Hein Bass. For example, Steinberg's Virtual Bassist and Bornemark's Broomstick Bass provide both a combination of multi–sampled bass instruments and some automated performance options. Of the two, Broomstick Bass is probably more flexible as a playable instrument and includes a wider range of bass types, but Virtual Bassist has the more comprehensive amp and effects modelling options.

Spectrasonics' Trilogy and Vir2's BASiS both confine themselves to sampled instruments rather than automated performance and, compared to CHB, both include a wider range of sampled bass types, including synth bass sounds. However, while CHB only provides a small selection of basic instruments, these are sampled in a very detailed fashion.

For electric and upright acoustic basses, Chris Hein Bass is about as good as it currently gets. Not that cheap but well worth auditioning.