To create Lap Harp, the Cinematique Instruments team sampled an Eastern European zither-like instrument called a Perepyolochka, recording four round-robin variations and several velocity layers. Each note was also played using a plectrum, a piano hammer and the side of a thumb, so that within the Kontakt interface the user is able to select plucking styles (referred to as articulations) that suit their compositions. Before sampling commenced, the source instrument's tuning was altered from its diatonic scale to a chromatic one, and the recordings were made using a non-specified Schoeps condenser positioned so as to maximise the direct sound relative to that of the room. 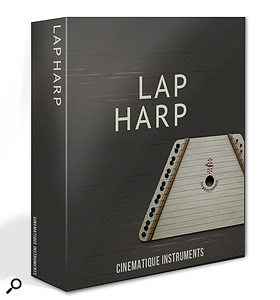 Kontakt instrument owners who dislike products that use multiple interfaces or have their controls embedded in numerous pages and pop-up panels may be heartened by the simplicity of Lap Harp, which fits everything on one page within a single interface. Such minimalism is possible because very few controls are included in the product's outer skin, although there's always the option of clicking on Kontakt's wrench icon to open up its editing panel.

Lap Harp helps its users get started by providing five presets, which might not seem like many, but because there are so few controls, each one is only a handful of tweaks away from the others. The most fundamental edit that can be made is to a preset's articulation mix. As mentioned earlier, the articulations were created by plucking and striking the strings in different ways, resulting in three note sounds. Plec (plectrum) is the thinnest of the three, but the Thumb articulation is not hugely different. The third, Wood Hammer, provides a much warmer tone than the other two, but lacks their scraping quality. Usefully, it's possible to select all three or any pair together, or just one on its own.

Articulation mixes can be processed further by applying low- and high-cut filters, cabinet and rotary speaker simulations and a chorus effect, although none of the above include editable parameters. There is, however, delay with a level dial, plus reverb with level control and seven presets.

The last two parameter options are perhaps the most interesting. When a button labelled Tremolo is activated, each key is re-triggered upon its release, which encourages a very rhythmic style of play. Equally interesting is the Glissando feature, which at first appears not to work because keyboard notes fall silent once it is on! In this instance the user holds down a pattern of notes and then moves their mod wheel up and down at the appropriate speed to play the sequence. Arpeggiators are the tool virtual instruments usually offer for note pattern triggering, but Tremolo and Glissando are refreshing alternatives.

In terms of sound, the instrument hovers somewhere between a harp and a zither, although it slightly lacks the depth of the former and the twang of the latter. Nevertheless it is very attractive in its own right, and responds nicely when effects are applied.