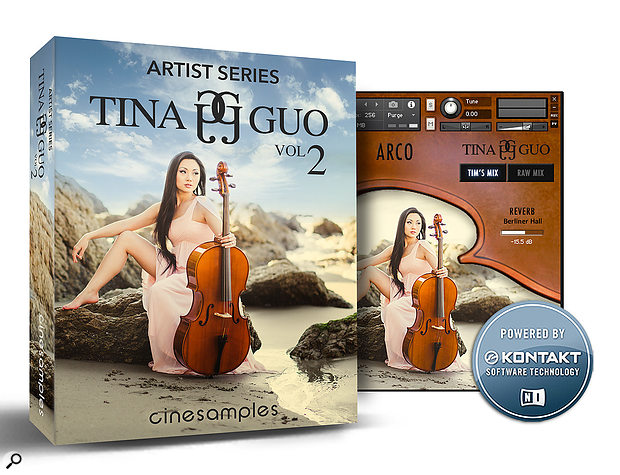 World-renowned and Grammy-nominated cellist Tina Guo recently returned to Cinesamples to create a valuable update to her industry-defining Tina Guo Cello virtual instrument. The new Tina Guo Volume 2 adds six new instruments and deeper functionality to the existing high-quality library, while functioning as an effective stand-alone instrument in its own right.

The library has two main mixes; the 'raw' mix for custom production and the more polished 'Tim's Mix'. It is suggested that you begin by turning the quality onboard reverb all the way down, as the MGM soundstage has a beautiful character which needs no assistance. Dynamics are controlled via the mod wheel.

The six new patches are headlined by a wonderful new legato patch. Where the highly expressive Vol 1 legato had a delayed onset and somewhat moody (though always effective) vibrato ideal for melodic and slower passages, Vol 2's main 'arco' patch is intended for faster passage work, while the quality of legato transition lives up to Vol 1's high standard. The vibrant spiccato patch and the appropriately biting marcato patches both have round-robin articulations sufficient to make even lengthy repeated passages sound convincing and realistic. The latter has a deep and even vibrato with a striking envelope and bloom, and seems custom made for climactic final notes.

Perhaps the most stunning sound in the collection is the sul pont instrument, where you can hear the performer travel up the string towards the bridge, creating a sound that gets more airy and edgy over time.

The harmonics are immaculately recorded, possessing an ethereal quality which — like the sul pont — can be played beautifully as a chordal instrument outside of standard cellistic applications; a suggested future update would be to include a few of the lower and frailer harmonics which here are missing.

The vibrato pizzicato patch is effective, though it is surprising that, given Tina's highly expressive style, she did not also include the more wide and wild vibrato that can be achieved with this technique. As it stands certain strings have a nice and somewhat pronounced vibrato, while on many the vibrato cannot be heard at all. The four open strings are also sampled in a patch, a valuable practical finishing touch.

Cinesamples also include three patches of numerous special effects and phrases where keyswitches are employed to change the starting note. Including a number of brief melodic fragments, portamento passages, and sound design elements, they are a truly useful set of sounds to round out an already fine library.

Having already used the Vol 1 legato instrument in significant mock-up work, Vol 2 fits seamlessly into this workflow, while the quality of the sounds matches perfectly to the older library.

Perhaps the only question remains: with such a great instrument at her disposal, does Tina Guo use her digital self to accompany her actual self? Highly recommended as both a stand-alone instrument and an expansion to the wonderful Vol 1.