A Composer's Guide To Game Music

I spent seven years as a freelance game composer back in the '80s and '90s, when we tended to be part musician, part computer programmer and were constantly honing our skills to meet the demands of emerging hardware, game formats, and soundtrack and sound-effects requirements. There were plenty of books covering programming, and plenty more on music composition, but nothing covering the particular combination of skills required by the game composer.

Winifred Phillips is a multi‑award-winning composer of video‑game music, and her book A Composer's Guide To Game Music (ISBN: 980262026642, MIT Press) is partly educational and partly inspirational. It explores why a musician would want to write game music, useful skills, and why music is such an important part of the game‑playing experience. She then moves on to the nitty gritty: how to establish themes (character‑based or otherwise) and the way music can establish the appropriate mood and emotional feedback for different genres of game (eg. shoot 'em up, exploration/role‑playing, and world creation).

Particularly interesting is the chapter entitled 'Roles And Functions Of Music In Game', in which Phillips explores the use of music to establish a state of mind in the player, to act as a virtual audience reacting to the player's heroic deeds and disappointing failures, as a means of recognising or giving notice of incoming characters/tasks, or indeed as internal music having a reality within the game world itself, rather than a score supporting it from outside that world.

Once your mind has been prepared in this fashion, the book delves into the practical details of the art. It covers preparation and workflow, including the potentially boring parts for musicians that may prove vital to the end result, such as documentation and character dialogue scripts. More inspiring aspects are covered too, including concept art, storyboards, short video 'cinematic' sections that require tightly scored music to tie in with choreographed action sequences, 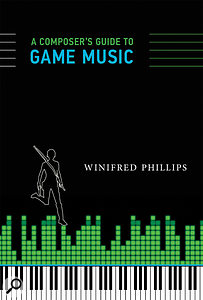 exactly like a film soundtrack — plus parallel aspects including your own background research on the genre/world in question.

For newcomers to this billion‑dollar industry, the discussion of the development team structure should prove invaluable, as will the chapter explaining how best to build up your business and gain contacts and work. There's also a useful reference section and comprehensive index.

For musicians used to writing complete songs/tracks, the revelation may be the chapter explaining how to write 'linear' music; that is, music with no beginning, middle or end, and which loops along with the action, interspersed with occasional flourishes/stings/transitions that tie in with specific events happening on screen. For me, the most interesting part is that which covers the art of interactive music, which is specially written either in multiple layers linked to events on screen (such that the action determines which combination of layers is heard at any time, and hence the mood) or in what Phillips refers to as 'horizontal re‑sequencing', where music is written in short‑yet‑complete sections (often just a few bars long) that are strung together on the fly according to the action.

A Composer's Guide To Game Music is a great introduction to this specialist art that would have helped me a great deal when I was starting out. My only reservation is that, despite the author's obvious excitement about her subject, the huge number of specific projects she refers to as examples, and the helpful black‑and‑white line drawings, diagrams and snippets of music manuscript (for those that can read the dots), this book can nevertheless come across as rather dry. Considering that the industry it describes is one of the most interactive and colourful on the planet, I'd have loved to see more screenshots linking action with music, and even linked audio snippets on the author's web site to flesh out this otherwise most instructive book. Martin Walker