Cornell are well known for their boutique guitar amps, but they've come up with a new twist by building a valve amplifier into a floor-pedal format that can be used as a preamp feeding a PA system, as an overdrive pedal, or — when coupled with a suitable loudspeaker — as a low-power tube amp for recording, practice or small gigs. The chromed metal construction is solid and stylish, and at 3.6kg it's weighty too, considering that it measures only 250 x 160 x 135 mm. Mains power comes in via a switched IEC inlet, and the rear panel helpfully sports a couple of 9V DC sockets to power other pedals. 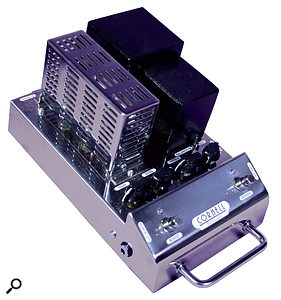 There are controls, for gain, bass and treble, plus a stepped, eight-position Master Output level control. There's also a hard-wired bypass footswitch and a Boost footswitch, giving you access to extra drive for solos. When active, this switch bypasses the tone controls and imposes its own preset tonal characteristic. A dedicated jack socket sends a speaker-emulated, line-level signal to a mixing console or recorder, and there's a headphone output as well as the speaker output and pedal-level output. Based on a pair of 12AX7s and a single EL84 power valve, the Pedalamp can deliver 4W into an 8Ω speaker. When the pedal's speaker-emulated output is being used for recording or feeding into a PA system, the Pedalamp can safely be run without a speaker attached.

So, on the face of it, this little pedal offers a great deal of flexibility to the self-recording guitarist. But what's it like in practice? As an amp, the tonality is greatly dependent on the choice of speaker, but I found that the Pedalamp produced plenty of level for recording or even smaller gigs, if miked or DI'd. There's a gratifying degree of touch sensitivity, and those higher-gain settings get you into classic rock overdrive territory. Kick in the boost and the tonality takes on a mid-heavy, almost Tube Screamer quality, with a slight increase in overall level.

In its pedal configuration, the Pedalamp worked well with my Vox VTX hybrid amplifier, though there was a little background noise in evidence (even at very modest gain settings). The tonality thickened up in a useful way that still kept the ring and clarity of the high end. DI'ing into a powered PA speaker produced a surprisingly convincing guitar speaker sound but, oddly, there's no speaker emulation on the headphone output. The unit is happy to allow you to use all four outputs at the same time, which will be useful if you need to feed a speaker at the same time as generating a DI feed, for example.

Overall, then, the only obvious omission — other than lack of speaker emulation on the phones output — is an effects loop, for adding delay or reverb effects in amp mode. While it's not an impulse purchase, the Pedalamp is a thoughtfully designed and beautifully engineered piece of kit, and its build quality means that it should last a very long time. If you both record guitar and play live, it could be a good long-term investment.  Paul White