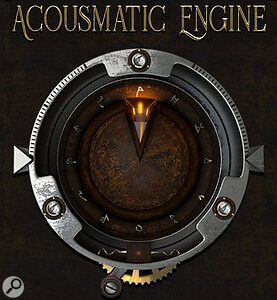 Conceptually based around 500 presets, the library is divided into three themed categories: Lovecraftian Horror, Sci‑Fi Noir and Steampunk. These are each subdivided into Aerophones (things that vibrate with sound pressure), Friction (bowed, scraped, rubbed), Movements (arpeggiated, sequenced, warped), Struck (percussive) and (with the exception of Sci‑Fi) Soundscape categories. Acousmatic Engine’s structure comprises 16 sample layers, eight of which are termed ‘Electrics’ (synthetically generated) and eight ‘Acoustics’. The Acoustics are sampled from real‑world objects, using a variety of exotic techniques. Every preset loads its own unique set of samples which are never identified by name. You’re not sure exactly what it is you’re hearing, apart from them having been synthesized, blown, bowed or struck. This may account for the library’s title — ‘acousmatic’ is a term used to describe sounds with no discernible or observable source.

The heart of Acousmatic Engine is the Warp Wheel, resembling a Stargate encased in a steampunk‑styled housing. Turning the Warp Wheel (by the mouse or CC1) controls the movement of six macro knobs, each of which is assigned to one of 29 parameters, generating dramatic textural changes. The Warp Wheel can also control (and be controlled by) various other factors, revealed in Expert mode. You can also record up to 45 seconds of Warp Wheel movements that reiterate automatically as you play.

Expert mode reveals a masterpiece of steampunk design, with one of the most intricate Kontakt GUIs I’ve seen. On the Mixer page are eight faders: four for Electrics and four for Acoustics, each with mute, solo and bipolar ‘lightbulbs’ for panning. Two toggle switches access alternate layers of eight identical faders, giving control over 16 layers in total. The faders can also double as sample start time offset sliders. Pitch can be adjusted for each Electrics channel, as can the first, second and third harmonic resonance of the Acoustics channels. The Grain engine can be activated on individual channels with controls for speed and time. Settings can be stored as variations in the Warp Wheel.

Expert mode reveals a masterpiece of steampunk design, with one of the most intricate Kontakt GUIs I’ve seen.

The Arpeggiator is a 32‑step pattern editor with controls for speed, note length, octave range and five playback modes. It can optionally be used to sequence Warp Wheel movements for far‑out rhythmic effects.

Acousmatic Engine will resonate strongly with sound effects designers of all persuasions. No doubt we’ll be hearing it in games, sci‑fi and horror movies very soon.