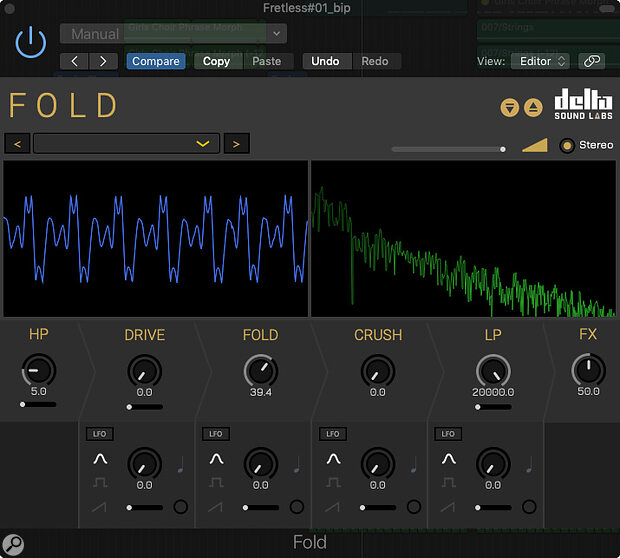 There are many types of distortion that can be pressed into service in the name of musical creativity, ranging from soft saturation and analogue overdrive to digital bit‑crushing and wave reshaping. Delta Sound Labs’ Fold gives us a taste of each of them, along with some resonant filtering, and it’s simple and intuitive. The input is processed by a variable high‑pass filter with adjustable resonance, after which the signal encounters three distortion sections and one filtering section. A mastering control sets the effect depth. This isn’t simply a wet/dry mix control, though, but rather a master effect‑intensity control. The two display sections show the processed waveform on the left and its spectrum on the right.

For each of the four sections Fold provides an LFO modulation sub‑section offering manual or tempo‑sync LFO rates, a choice of sine, square or ramp waveforms a depth slider and an LFO on button. There’s also a button with which you can reset the phase of the LFOs. These modulate the amount of processing taking place, and when tempo‑sync’ed some useful rhythmic effects can be created. Section one provides a range of analogue‑style drive, controlled by a rotary Drive control and a horizontal slider that goes from soft to hard distortion.

Next is Fold, a type of waveform reshaping that inverts the peaks of the waveform to make them fold back on themselves. It’s a process that can generate a lot of harmonics and under normal situations it would invite aliasing distortion, but the user can select up to 16x oversampling to ensure that the distortion being generated is as pristine as possible.

The most aggressive distortion comes courtesy of Crush, which uses a bit‑reduction algorithm...

The most aggressive distortion comes courtesy of Crush, which uses a bit‑reduction algorithm to generate a lot of new frequencies that are often harmonically unrelated to the input. Used sparingly, this can add brightness to some instruments and you can push it further to crunch up limp snares, percussion loops and suchlike. (Pushing it too far soon puts you in ‘snails in a blender’ territory!).

Last is the resonant low‑pass filter stage, in which the LFO controls the filter frequency and the horizontal slider the resonance. Not only does this allow for synth‑like resonant filtering, but it also provides a means to tame the high‑frequency excesses of the distortion stages if need be.Fold is very easy to use and is certainly capable of bending a signal well out of shape, as well as bringing LFO‑controlled modulations to the proceedings. I was rather baffled by the lack of a wet/dry mix control, as this seemed like an obvious thing to include, and I’d have liked an envelope‑follow option for the filter, and these strike me as possibilities for a future update. Currently, if you want a wet/dry mix, you’ll need to feed the plug‑in from an aux send or use a DAW which has a wet/dry control for insert slots.

On balance though, Fold’s design aim has been well‑realised: it provides the user with an intuitive set of tools for combining and separately modulating three types of distortion and resonant filtering.