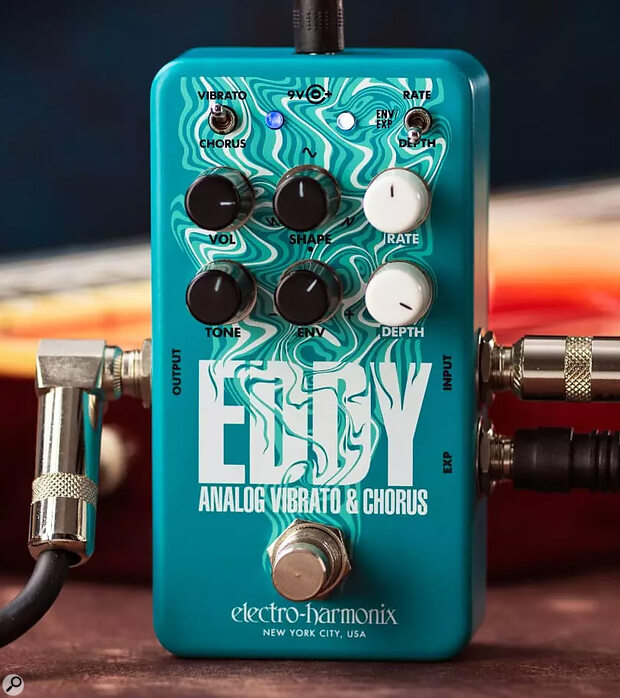 The familiar chorus effect is created by adding the dry signal to a pitch‑modulated version of the input, using a short delay and LFO‑driven time modulation. It was originally generated using charge‑coupled analogue delay lines. Remove the dry signal, and you’re left with pitch modulation or vibrato — and that’s exactly what you get with EHX’s Eddy pedal when you flip the left‑hand toggle switch to Vibrato instead of Chorus.

The old‑school bucket‑brigade analogue delay line gives this pedal a classic chorus sound that’s reminiscent of the company’s early Clone Theory pedals (that played an important part in my live rig back in the day). However, EHX have added another switch and a centre‑detented Envelope control that allows the Rate or Depth of the effect to be influenced, either upwards or downwards, by the input signal’s envelope. Another nicety is a Shape control for the LFO that has sine wave in the centre but sawtooth waves of opposite polarity at the two extremes.

In all, there are six controls, which govern Volume, Shape, Rate, Tone, Envelope and Depth, with a flashing LED showing the mod rate and another showing that the pedal is active. Additionally there’s a TRS EXP input that allows an expression pedal to control the rate or depth as an alternative to the envelope. Power comes from the included 9V PSU; there’s no battery option.

Internally, most of the space is taken up by two neatly built PCBs populated by a mix of surface‑mount and discrete components. Sonically, there’s a little background hiss, as you’d expect from an analogue delay circuit, but as long as the pedal is placed after any drive or compressor pedals, it shouldn’t be a problem.

The chorus sound certainly has a classic fluidity to it and being able to fade in the modulation depth (or change the rate) via a pedal is welcome. In Vibrato mode the pedal is again useful for adding your own delay vibrato to a note. I found that the Envelope feature worked fine with my Les Paul guitar but that it could have used more sensitivity when teamed with an instrument that has single‑coil pickups. If you have a guitar with weak pickups, then, you might want to put a booster or compressor pedal before the Eddy for the best results.

To sum up, then, the extra features usefully extend the basic effects on offer here. Other than the Envelope sensitivity issue (which means it might not react properly to guitars that have weaker pickups) the Eddy scores very highly for musicality and value, especially if used in conjunction with an expression pedal. EHX have once again produced a well‑engineered pedal that reaches out beyond the ordinary but they’ve made it available for a very ordinary price.