Tired of navigating complex audio software with just a mouse and keyboard? Then a control surface might be just what you need. Here's our selection of current models, with links to the SOS review where available. 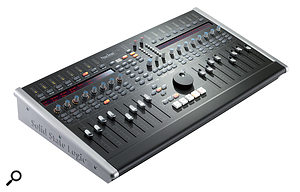 The Nucleus combines a control surface, interface, preamps and monitor controller, and is intended to form the heart of your studio. It uses the same control technology as can be found in SSL's high-end consoles, and incorporates a useful 16-channel meter-bridge. The Nucleus also ships with two of SSL's highly regarded Duende plug-ins. 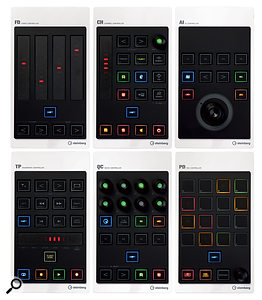 Steinberg CMC SeriesThese affordable controllers have been designed specifically to work with Cubase. The idea here is that you can build up your own custom control surface over time, with as many rotary controls, virtual 'fader' strips, and buttons as you need. Steinberg even make a four-module chassis for them, called the Studio Frame 4.

This premium model from Smart AV combines a 22-inch colour touchscreen with a generous selection of tactile controls, including eight motorised faders and 27 rotary encoders. 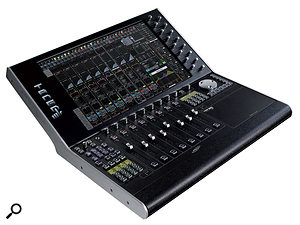 Smart AV Tango 2The controls automatically assign themselves to DAW parameters, while the screen graphics change according to what you're controlling. 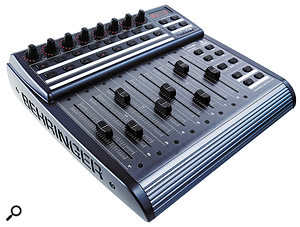 Though relatively old, these controllers are still remarkably popular, in particular the BCF2000, which is still the cheapest control surface with eight motorised faders available. The cheaper BCR2000, with its 32 encoders, also represents extraordinary value, and multiple units of either type can be daisy-chained to create an expanded surface.

Originally developed by high-end digital console manufacturers Euphonix, the Artist Control V2 is well regarded for its build quality, and the fact that it is highly customisable. It connects to computers via Ethernet, and uses the EuCon control protocol. The large colour touchscreen offers control of plug-ins, as well as DAW mixer parameters. 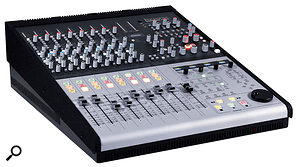 The Control 2802 is something of a hybrid product, combining a comprehensive monitor controller, a 32-input mixer and a control surface with eight motorised faders. The function of the faders can be 'flipped' between adjusting the mixer section's analogue input levels, or the fader positions in your DAW.

Derived from Novation's range of controller keyboards, the Zero SL MkII is intended to offer plenty of hands-on control of soft synths and plug-ins, via its multitude of knobs, buttons, faders and drum pads. It uses the acclaimed Automap software to automatically assign its controls to software functions. 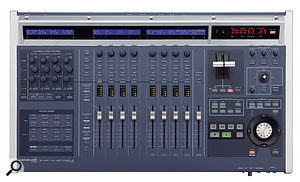 This imposing controller offers tight integration with Cakewalk's Sonar, via its nine motorised faders, 20 rotary encoders, jog dial and T-bar. It also has numerous buttons for navigating Sonar functions, and is available either on its own or bundled with an 18-in/24-out USB audio interface. 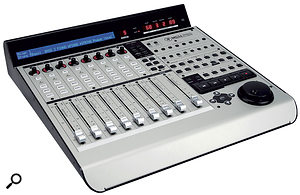 This tried and tested controller has eight motorised, touch-sensitive faders, plus a comprehensive transport section, including a shuttle wheel. As one of the most established control surfaces, it's also compatible with pretty much every major DAW. Expansion units come in the form of the C4 (a plug-in controller with numerous rotary encoders), and the eight-fader Extender Pro. 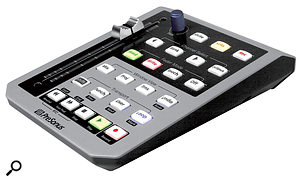 If you don't have space for a full-sized control surface, but the idea of a physical fader still appeals, the Faderport is well worth checking out. Its one fader is motorised and touch sensitive, allowing you to easily input level automation data, and it also features a well-appointed transport section.

Although they might not directly improve the quality of your productions, control surfaces can have a profound effect on your workflow, and could even offer some important health benefits. 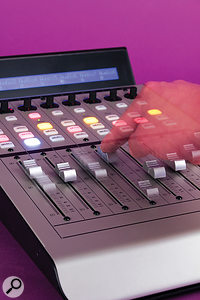 Back in the days of analogue recording, everything was operated by buttons, switches, knobs and faders. Fast-forward a few decades to the computer age, however, and you'll find that many engineers spend more time in front of a computer screen, mouse and keyboard than in front of rows and rows of channel strips!

Nostalgia being the powerful marketing tool that it is, software designers have gone to great lengths to recreate the vibe of vintage studios in their 2D user interfaces, incorporating old-fashioned VU meters and graphics with Bakelite knobs and chrome switches... But the one thing they can't emulate is the tactile experience of grabbing a fader to turn something up or down, or tweaking a knob until the sound you hear is just right.

Around a decade or so ago, however, manufacturers started making 'control surfaces' — devices that looked for all the world like analogue mixers, with faders and knobs aplenty. But unlike analogue desks, these fader-adorned boxes don't actually pass audio themselves: they simply send control data to computers, so that raising a physical fader on the control surface turns a channel's volume up in whatever DAW you're using (for example).

Although some people consider control surfaces to be an expensive luxury — surely a mouse can perform exactly the same job? — there are a number of very real benefits to be had from them...

Many mix engineers swear by automation: the process of dynamically changing parameters (volume, EQ cuts and boosts, and so on) throughout a mix. While this can be achieved with a mouse alone, by drawing fades and such into a DAW, doing it in that way means that you can only change one parameter at a time, because there's only one mouse pointer! With a control surface, however, you can move multiple faders in one pass, which saves you having to make vocal fader adjustments first, then go back to the beginning of a song again to make guitar level tweaks, and so on.

Another reason for going down the control-surface route is that it distances you from the visual aspect of music production. Level meters, waveforms and plug-in interfaces are very useful tools from a technical point of view, but many people find them extremely distracting when trying to concentrate on the sound coming out of their speakers! With a control surface, however, you can work in a much more traditional way, by simply tweaking knobs while listening, rather than worrying about whether the information on your computer screen 'looks right'.

But perhaps the most important benefit that control surfaces offer is improved ergonomics. As anyone with a desk job will know, sitting in the same position using a mouse and keyboard for hours on end can do serious damage to your muscles and tendons — which is bad news for musicians, of course, who need their arms in tip-top shape in order to play their instruments effectively!

Using a control surface rather than a mouse inevitably means performing a range of different arm movements, rather than the same small movements over and over again, which significantly reduces the risk of acquiring a repetitive strain injury (RSI) or carpal-tunnel syndrome. The potential health benefits alone, therefore, might be reason enough to invest in a control surface.

Of course, no round-up of DAW controllers would be complete without mentioning Apple's hugely popular iPad. There are now dozens of different controller apps available for the iPad, ranging in sophistication from simple transport controllers all the way up to complete emulations of a hardware Mackie Control. And because the iPad supports multi-touch gestures, you can use these to input multiple types of automation data simultaneously.

The one thing iPads lack compared to a dedicated surface is tactile feedback — you don't get the physical 'feel' of moving a fader or knob. They're also relatively expensive, if you consider the fact that you can get a full-fat, motorised-fader controller for about the same price! That said, though, if you already own one, paying the small extra fee for a controller app is almost a no-brainer. What's more, and unlike the controllers listed on the previous pages, iPads can connect to computers wirelessly, so you can control your DAW from another room entirely. And for people who work alone and have to record their own playing, remote control could well be an advantage worth having.