DPA demonstrate the state of the art with their latest high-voltage designs.

The Danish company DPA have a fine reputation for their range of studio microphones, several originally derived from Bruel & Kjaer measurement microphones. The 4041T is a large-diaphragm omnidirectional tube microphone intended for serious music-recording applications. It has an overall length of 170mm and a 'pencil' body measuring 19mm in diameter. The capsule is designed to be removable, but, unlike most modular mics, this is not to allow different polar patterns to be used. Instead, the omni capsule is retained and the body is exchanged for others with different impedance-conversion circuitry: high-voltage valve or solid-state designs, or a phantom-powered solid-state version.

The complete assembly weighs around 190 grams and is supplied with a clever all-metal stand adaptor which secures the microphone with a screw-down clutch action. The microphone body is simply slipped into the adaptor, and a knurled ring is tightened to impose a very firm grip on the microphone body. A 3/8-inch thread adaptor is supplied and a dedicated shockmount is available as an optional extra — although, as a pressure-operated mic, the 4041 is not particularly prone to vibration.

The MMC4041 omnidirectional capsule employs a 24mm (one-inch) diaphragm made, unusually, from stainless steel. The capsule casing is also manufactured from stainless steel, and this combination is claimed to provide excellent immunity from ambient temperature (and thus humidity) variations. A quartz insulator isolates the condenser backplate from the housing, which is just as well given that it is polarised with 190V DC!

DPA have long championed the use of high-voltage operation to provide extremely wide dynamic range and high sensitivity — in this case of 85mV/Pa, which is a good 12dB higher than for most large-diaphragm mics. The capsule specifications boast a very low self-noise of between 7dBA and 10dBA (depending on the preamp body in use), and a distortion figure of 0.5 percent at 120dBSPL, with clipping occurring at a huge 144dBSPL (peak). The microphone's frequency response extends from 10Hz to 20kHz (±2dB), although it appears to remain substantially flat well below that lower frequency limit, with a gentle on-axis boost of about 5dB. This peak is roughly two octaves wide and centred on 8kHz to provide a flat overall response in a diffuse sound field.

The polar response is virtually a perfect omnidirectional pattern up to 5kHz or so, above which it narrows gradually towards a subcardioid response. This is due to the self-shadowing effect of the body to rearward sound sources. The review model was equipped with the MMP4000T high-voltage valve body. This uses a sub-miniature pentode valve configured as a unity-gain Class-A cathode-follower. This transformerless design deliberately introduces an element of 'musical' second-harmonic distortion, and endows the mic with the higher level of self-noise mentioned in the specifications (9dBA in the case of the review model). The mic is connected to the preamp/power supply with a special six-pin XLR cable but, rather bizarrely, this is not supplied as standard with the mic.

Where total sonic transparency and state-of-the-art noise performance are required, two solid-state alternatives are available. The first is another high-voltage design called the MMP4000S (achieving 7dBA self-noise), and the second is a phantom-powered version called the MMP4000SP (with 8dBA self-noise). Both operate as transformerless unity-gain, Class-A impedance converters, and the only performance differences between the two designs are that the SP model clips 10dB earlier than its high-voltage sibling (maximum 134dBSPL), and has a slightly higher low-frequency limit (20Hz). The microphone bodies are exchanged by simply unscrewing the capsule, which is designed with a sleeve to ensure correct alignment and thus prevent accidental cross-threading.

The HMA5000 dual-channel preamp and power supply can be used with a range of other high-voltage DPA mics (4003, 4004, 4012, 4016) as well as with the 4041T and 4041S. It supplies 130V for the electronics, plus a 190V capsule polarising voltage. A separate balanced 6.3V supply is provided for the valve's heater. The mic's output signal is unbalanced, but its relatively high level, combined with the special construction of the six-pin XLR connecting cable, seems to provide excellent protection against interference. 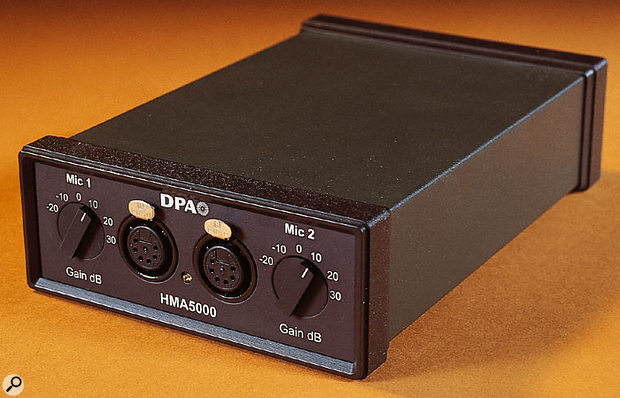 The HMA5000 measures 52 x 133 x 200mm (hwd) and weighs a substantial 1.85kg. The front panel is equipped with two seven-pin XLR sockets (although the central seventh pin is blind) to accept the outputs from a pair of microphones. Two rotary gain switches are scaled from -20dB to +30dB in 10dB steps. The rear panel carries a pair of three-pin output XLRs (sensibly marked as line-level outputs), each with an associated polarity-reversal switch. An IEC inlet accepts either 120V or 230V mains supplies with automatic switching. The electronically balanced line-level outputs are capable of driving up to 300 metres of cable, if necessary, with a maximum peak signal voltage of a massive +32dBu!

Strangely, when used with the 4041 microphone (either body type), the output polarity of the HMA5000 is inverted (relative to the 'pin two hot' standard), but it is correct when used with all the other high-voltage models. However, if absolute polarity is important to you, simply flipping the rear-panel toggle switches corrects the situation.

I am quite a fan of pure omnidirectional mics — when employed in suitable situations — as they tend to provide an extremely natural and transparent sound quality which even the best cardioid mics simply can't approach. Furthermore, a good omni's frequency response will extend at least an octave lower than that of a cardioid, which is invaluable when recording wide-ranging instruments such as pipe organs or pianos.

With the preamp gain set to 0dB, and after allowing ten minutes for the microphone to warm up, I initially tested it by walking and talking. It was immediately apparent that the frequency response extends smoothly to both extremes, and the polar response is a well-defined omni over most of the range, with a very smooth off-axis response falling gently towards the rear at extreme high frequencies. Noise levels were impressively low, and on spoken voice the claimed harmonic distortion of this valve body was extremely subtle. Next, I put the 4041T up against my favourite Sennheiser MKH20s (hooked up through a GML mic preamp), placed side by side in front of a baby-grand piano. The Sennheiser has phenomenally low distortion thanks to its unique symmetrical capsule design, and the slight richness associated with the 4041T's modest second-harmonic distortion became more apparent in comparison.

Of particular note was the 4041T's ability to handle extreme dynamic ranges, drawing out superb ambient detail, and the way it could accommodate huge transients with ease — something made very obvious on the meters of a digital recorder. It's a good job I routinely record with plenty of headroom, especially in the light of the preamp's 10dB gain steps. Compared to the MKH20, the 4041T sounded fractionally more silky at the top end and a little less congested when (mis)placed close to the piano dampers to capture rather excessive hammer transients. On occasions I perceived a mild mid-range richness, presumably due to the harmonic distortion, but this characteristic remained remarkably subtle.

This is a very expensive microphone, especially when the required power supply is added into the equation — although the fact that the HMA5000 provides a pair of very high-quality preamps should be borne in mind when comparing prices. In extremis I think the DPA 4041T outperforms the Sennheiser MKH20, but the law of diminishing returns applies here. The sonic differences were extremely small, even at the limits, and only top-quality rooms, instruments, and performances would justify the expensive benefits of this flagship DPA microphone. However, it's good to know that the ultimate performance of microphones is so very high, and that it continues to improve with the increasing sophistication of new technology. 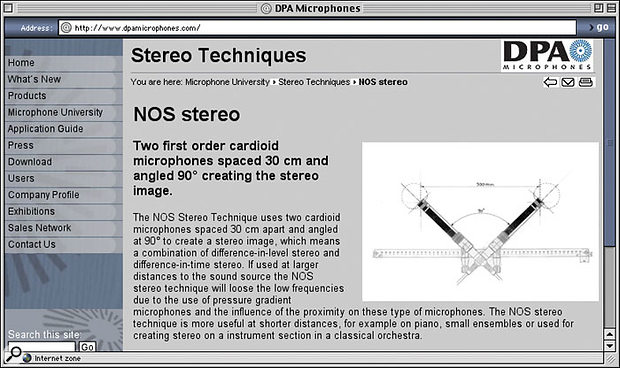 The DPA web site is a mine of useful and instructive information concerning everything to do with microphones and microphone technique, much of which has been gathered under the tag of the Microphone University. Following the links through the site, the reader is presented with several options, including a Microphone Technology Guide, a Pro-Audio Dictionary (with over 80 entries), and practical advice on both Stereo Techniques and Surround Techniques. In addition, there is an Application Guide which lists nearly thirty different instruments and ensembles, as well as offering some helpful information about the sound characteristics of each, with suggested miking techniques and recommended DPA mics.

Each of the main subsections mentioned above is subdivided into numerous chapters. For example, the Stereo Techniques section has ten chapters detailing each variation of spaced and coincident techniques: A-B, baffled, binaural, Decca tree, DIN, NOS, ORTF, X-Y, Blumlein, and M&S. The Microphone Technology guide includes chapters on fundamental issues like balanced and unbalanced lines, as well as more complex subjects such as the technical differences between omnidirectional and directional mics, large and small diaphragms, transformer-coupled and transformerless designs, and phantom or high-voltage mic-powering arrangements.

All in all, there is some extremely good information to be found here, with practical examples and, in the case of the Application Guide, some excellent photographs to help illustrate the suggested mic positions.

A unique high-voltage omnidirectional microphone with interchangeable electronics and a stunning sound quality.