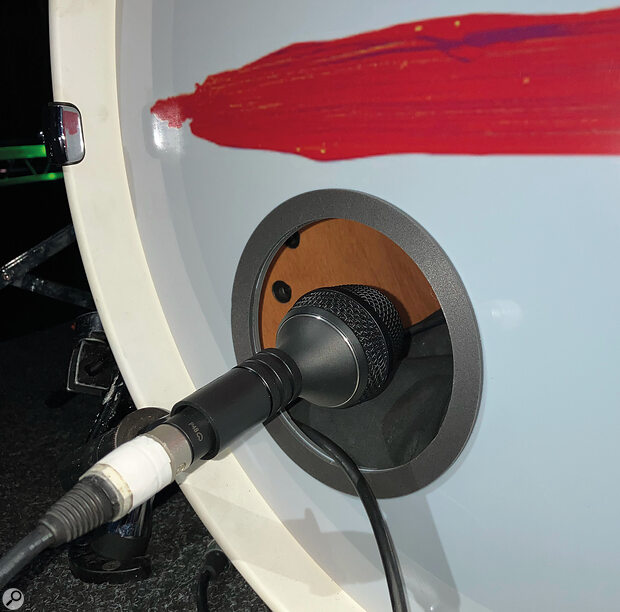 We put DPA’s new kick mic to work on a series of major festival headline shows.

When I was approached to try a new DPA microphone I eagerly agreed, although initially they wouldn’t say what it was! The 4055 turned out to be the company’s first mic designed specifically for kick drums, and was supplied with a selection of other DPA models, arriving just in time for me to try them out in production rehearsals for one of my clients.

On first inspection, I was impressed by the packaging, look, weight and finish of the mic. This is a company with respect for engineering. The microphone finish is excellent, and gives you confidence that it has been built to last. It was only when I looked closely, however, that I noticed the asymmetric styling. The head of the microphone, containing the capsule, is slightly offset from the connector barrel. It isn’t glaringly obvious why, but it makes sense when you try to put the microphone through a hole in a drum head. The design means the XLR cable and mic stand fit behind the capsule, allowing easy access to holes in the drum head just larger than the microphone, with less chance of tearing the skin. It is this sort of attention to detail that engineers like me love.

The capsule, like many other DPA mics, is a pre‑polarised (electret) design. This is housed in a larger‑than‑normal (for DPA) body. Bass drum mics are exposed to heavy wind blasts and turbulence, especially around the front skin hole, and the larger body has allowed DPA to build in extra wind damping to mitigate any problems that might arise from this. The 4055 is able to withstand SPLs in excess of 156dB, and the output level of 2mV/Pa should mean that even a loud drummer will not overload the input of your preamp.

The pickup pattern is described as ‘open cardioid’, being somewhat less directional then a ‘true’ cardioid. This is not unusual, and the pattern shown in the provided diagram matches what I experienced. The slightly less directional quality was apparently chosen by DPA after extensive listening tests.

The on‑axis frequency response is almost flat from 20Hz to 2kHz, but with a slight HF rise that peaks around 10kHz before falling off again just below 20kHz. Off‑axis the peak is less pronounced, while pickup from the rear of the microphone is lower in level, obviously, and also slightly recessed in the mids.

The 4055’s published frequency response, both on‑axis and at various angles off‑axis.

In testing, I first used the microphone a few centimetres away from the front head hole, on a 22‑inch kick drum. I had previously tried several other microphones in this position, and had never been completely happy with the results. The drum also had a boundary microphone mounted inside; I was happy with this and had used it for several years, and it proved helpful for comparison purposes.

Listening tests were initially done using a medium‑sized three‑way speaker system with 15‑inch subs. I am primarily a live engineer and the rehearsals were for an upcoming Biffy Clyro show. I was looking for a microphone that could add weight to the sound of the drum.

Pushing the fader up with a flat channel just sounded good! Without any equalisation, I had a solid low end and enough top to provide a good starting point for any processing I might need. What the 4055 didn’t have is the ‘scooped’ sound I have become accustomed to with other microphones designed for use on kick drums. I see this as a positive. I don’t want creative decisions forced upon me and would rather the mic capture a natural sound that I can EQ later if needs be. The mic captured the transients of the drum well, and I was quite happy with the sound of the 4055 on its own. Placing the microphone nearer the centre of the drum increased its ability to capture the attack of the beater, producing a more aggressive sound, and the high sound pressure levels inside the drum didn’t seem to trouble the 4055 at any point. When I blended the DPA with the drum’s existing internal microphone, it was clear that the 4055 had a flatter and less aggressive sound. I also noticed what seemed like half an octave more of bottom end on the DPA. This was confirmed on the desk’s real‑time analyser. Rather than tapering off, the microphone’s low‑frequency response was very extended, smoothly reproducing even the lowest frequencies produced by the kick drum. This is a microphone capable of capturing challenging sounds with precision and ease.

The extremes of frequency that the microphone captured helped provide the low‑end impact I was looking for, and without adding any equalisation.

Getting a solid kick drum to underpin the sound of the band is a big part of my job. The 4055 helped achieve this without over‑emphasising the kick and with a neutral, extended frequency response.

Since we liked the sound in rehearsals, the microphone was used at a selection of Biffy Clyro headline festival appearances over the following month. It sounded great! On the larger system, the extremes of frequency that the microphone captured helped provide the low‑end impact I was looking for, and without the need for any equalisation. I have provided a couple of photos to help demonstrate this (see 'Going Solo' box), and also demonstrate my confidence in this microphone.

I am now faced with having to send the 4055 back, and a summer of festivals without it. I am considering parting with some cash. It is not cheap at over £600$700, but this is a microphone built to last, and priced accordingly.

For those of you looking at a kick microphone for studio or live work, the 4055 ticks many boxes. It will also, I am sure, prove very versatile, more so possibly than some of its competitors. DPA recommend its use on a range of instruments and I am sure it could step in and take on many roles — I think we will see some innovative uses in the near future. It is a high‑quality mic with an effective windshield in an attractive, practical housing, built to a high standard. What is there not to love? 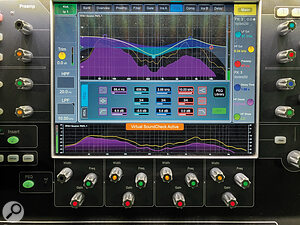 The RTA response of an internally mounted boundary microphone... 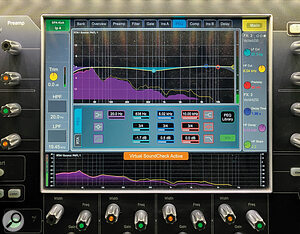 As you can see, the low‑frequency response is greatly extended on the DPA. The equaliser settings are as used during the show. The combination of the more aggressive‑sounding boundary microphone with the extended lows of the DPA worked well. However, after some experimentation, I ended up using the 4055 closer to the beater head and on its own — this worked just as well as the mic combination, but without the risk of the phasing issues that multiple microphones can bring.

The desk shown is an Allen & Heath DLive. The screens show the equaliser section with the real‑time analyser responses.

A high‑quality microphone designed to capture the wide dynamic and frequency ranges of acoustic drums in a rugged, well designed yet compact format. With its extended frequency response and wide cardioid pickup pattern, this is potentially a very flexible microphone that will tick many boxes.