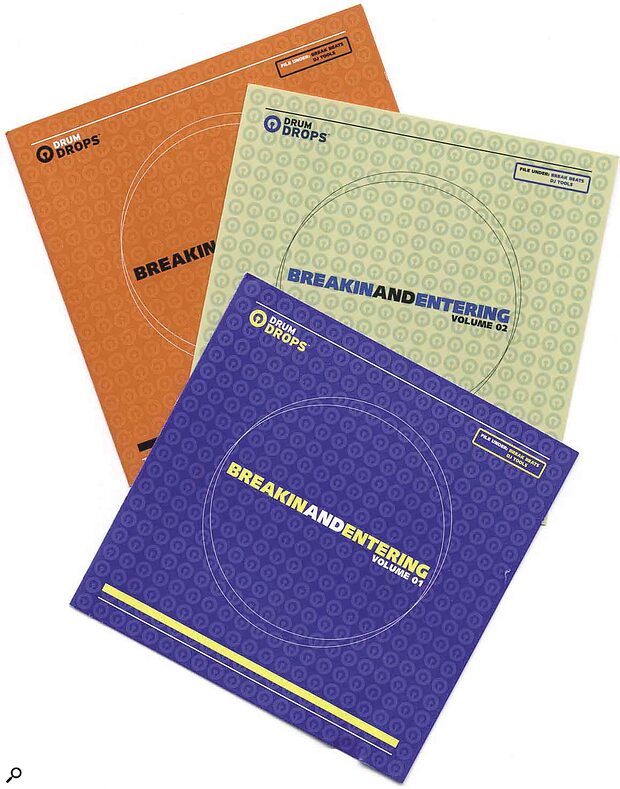 Produced independently by Mike Pelanconi and employing a handful of good session drummers, Drum Drops is a drum‑sample CD concept with a difference, not least because it is also available on vinyl! Rather than comprising an endless array of short loops, each of the three Drum Drops volumes contains around 10 complete drum tracks, typically over four minutes long, played to a click track and incorporating intros, fills and variations. The tracks are played as though to accompany a real song, but as your song is unlikely to have the same arrangement, some cutting and pasting will be required. As all tempos are provided and drum parts are relatively easy to edit anyway, this shouldn't be a problem.

The parts themselves are very well played, and recorded with a suitable amount of ambience. There are also a few nice additional percussion parts that come in during some of the tracks, whose tempos cover an approximate 80‑140bpm range. There seems to be a variation in styles on each volume, and the fact that the parts are played all the way through gives them an extra dimension of reality that is so often missing when the same loop is repeated ad nauseam. Of course, you could extract short loops quite easily if you wanted to, but that would be defeating the main object of the product, which is to furnish the composer with long sections of drums that were actually played all the way through.

How useful this type of sample is depends mainly on what type of music you do and how you like to work. If you'd like to know more about the concept, try the Drum Drops web site, www.drumdrops.com, where you can also read various user reviews. I have no doubts at all about the quality of these samples, but because you only get around 10 styles/tracks per CD, you really have to be sure they're what you want before you make a purchasing decision. Personally, I would have found an Akai‑format CD‑ROM more useful, with more rhythm parts broken down into loops of perhaps four or eight bars, intros and fills, and single hits, enabling you to piece together anything you need that the drummer didn't play. Happily, a Fistful Of Drummers CD‑ROM is planned for launch in January, and this will include the contents of all three Drum Drops volumes plus extra material.

Scoring a unique product like this isn't easy, because the quality of the playing and the long, unbroken tracks has to be balanced against the limited number of styles per CD, but the price is so low that you really have nothing to lose. A four‑star rating is well deserved. Paul White