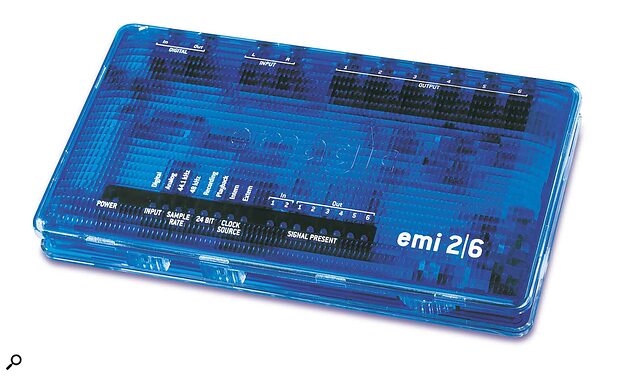 Emagic's EMI 2|6 is an audio interface that can be used with Mac or PC computers fitted with USB ports, making it particularly attractive to those wanting to add audio to their laptops. The small, transparent blue perspex unit comes in a neat carry case and derives its power directly from the USB port, though a DC PSU input is provided for situations where the host USB port or hub can't provide enough current — as turned out to be the case for my beige G3 (into which I have fitted a PCI dual‑USB‑port card).

Though the EMI 2|6 is an Emagic product, it comes with a low‑latency ASIO driver so it should work fine with any ASIO‑compliant application. Currently, Emagic recommend that even Logic users work with the ASIO driver, and all my tests were conducted using this and Logic Audio Platinum.

A Quart In A Pint Pot?

USB has had some pretty bad press when it comes to audio, as its restricted bandwidth makes it difficult to shoehorn more than four tracks through it at any one time. It came as a surprise, therefore, to find that the EMI 2|6 has two inputs and six outputs (all analogue on unbalanced phonos) and can be used for 24‑bit audio as well as 16‑bit. Additionally, the device includes stereo S/PDIF input and output on co‑axial connectors plus an integral headphone monitoring system with 3.5mm stereo jack and thumbwheel volume control. Sampling rates of 44.1 and 48kHz are supported and connection to the host computer is via a single USB cable (included).

PC drivers have been available from the date the EMI 2|6 was launched, but Mac drivers have only just been released, which made me keen to give it a try. On Windows platforms, the EMI 2|6 supports Wave Driver (MME), Direct Sound, ASIO and EASI, whereas on the Mac, it currently works with ASIO or Mac AV. Mac OS 9.2 or higher is recommended, and Logic users will need to upgrade to version 4.7.3 to run the EMI 2|6. Driver installation is via a straightforward installer routine, after which the computer needs to be restarted so that the newly added system extensions are loaded. It is important to do the installation without the EMI 2|6 connected, according to the manual. Similarly, if you need to switch from ASIO to Mac AV, there's a driver switch control panel to facilitate this, but it prompts you to unplug the EMI 2|6 from the USB port before doing so. This is apparently a problem Emagic are trying to fix, but at the moment, you have to live with it.

Plugging in the USB cable immediately brought up a message telling me the device was attempting to draw too much current, which left me looking around for a 5V, 500mA DC power adaptor. On connecting just such a device, I was greeted by the blue power LED, and once Logic was running and the ASIO driver selected, the green status LEDs inside the case started to make sense. There's a slide switch at the front of the case to select analogue or digital input, with a further switch selecting between internal and external digital sync. If no valid external digital clock is found, the unit automatically syncs to its internal clock. The green status LEDs show the analogue/digital input mode, the sample rate and whether the unit is recording or playing back at 16 or 24‑bit resolution. There are also internal and external digital sync indicators as well as 'signal present' LEDs for the inputs and outputs. The headphone output only monitors outputs 1 and 2, as does the digital output.

The audio quality of the interface is surprisingly good, being both quiet and free from digital artifacts. Even with all six outputs running, I experienced no glitching problems, and overall, once everything is installed, you just use the thing and take it for granted. Having a headphone monitoring system is useful, especially when you're working on the beach with your laptop, and of course the S/PDIF I/O is an essential element of any audio interface with pretensions to seriousness. Three different latency settings can be chosen (PC users seem to have a continuously variable slider), the middle one being under 10mS and quite fast enough for most uses, including virtual instruments.

Taking on the role of Mr Picky for a moment, the clearance around the phono sockets is quite tight, so if you have a proclivity for big chunky professional phonos, you may find it hard to push them all the way home. Indeed, the use of phonos at all for analogue audio is open to criticism as phonos were never really designed for repeated plugging and unplugging, and of course there's no way to balance a phono as it is inherently a two‑conductor connector.

In reality, these points are minor and won't affect a lot of people, but I really think that as the EMI 2|6 is being touted as a 'solution' to audio on laptops, it should have included at least one MIDI port, even if using it meant shutting down some of the audio outputs. Many laptops have only a single USB port, so the beach scenario for a MIDI + Audio package such as Logic Audio might have to include a laptop, an EMI 2|6, an MT4 MIDI interface, a USB hub and a carrier bag full of batteries and jump leads! Furthermore, there's no second USB port on the EMI 2|6 itself, so if you're using a laptop with a single USB port, you're left with nowhere to plug your dongle.

The EMI 2|6 is a neat audio‑only solution for modern USB computers and manages to provide more separate outputs than most competing products. In my tests, it worked consistently and reliably, even though I was using a third‑party USB PCI card in a pre‑USB Mac, though I did have to feed it from a separate power supply to keep my USB ports happy. The audio quality is as good as that of most well‑designed consumer digital equipment and there was no evidence of excessive noise or audio coloration. You could make albums with this little box and still be proud of the sound quality.

Having to unplug the USB cable when changing drivers is a bit of a pain, as is switching to 24‑bit playback after recording at 24‑bit resolution, but USB doesn't make life easy and I think Emagic have done a first‑rate job in creating a neat audio interface that works reliably. If you don't need loads of audio outs and you tend to record one or two tracks at a time, the EMI 2|6 is a good option as it doesn't take up any of your valuable PCI slots, but remember that my tests were done with no other USB devices connected. USB bandwidth is limited, so if you need to share your USB bandwidth with other devices, either be prepared to switch to two outputs only or consider a non‑USB interface.

A control panel accessed from within the Drivers and Hardware Setup window (in Logic's Audio menu) allows the EMI 2|6 to be used normally or to be set to a low‑bandwidth, stereo‑in, stereo‑out mode running at 16‑bit for applications where USB bandwidth needs to be conserved. The default setting is 16‑bit with all outputs on. Though there is a choice of 16 or 24‑bit resolution for recording and playback, it isn't possible to set both the inputs and outputs to operate at 24‑bit simultaneously. Instead, you can record at 24‑bit resolution while monitoring at 16‑bit, then switch to 24‑bit for playback when the recording is complete. This seems to be one of the tricks Emagic use to make the best of the USB bandwidth, though I couldn't find an explanation in the manual.

If you must use a USB audio interface, the EMI 2|6 seems to be one of the better conceived options.