Have you ever coveted the real-time functions of Ableton's Live? In which case, you'll be interested to know how you can simulate some aspects of Live in Logic using the Touch Tracks object...

Ableton's Live has a unique approach to digital audio sequencing, using real-time triggering of audio regions. If you want to experiment with this way of working, you can implement a similar, though less sophisticated, scheme in Logic with the use of the Environment's Touch Tracks object.

The Touch Tracks object is designed to trigger, and optionally transpose, individual MIDI sequences, as well as folders containing multiple MIDI sequences (a rough equivalent of Live 's Scenes). Touch Tracks cannot trigger audio clips, but you can work around that by using MIDI to trigger a sample player such as Logic 's EXS24. (Ironically, Live could not originally trigger MIDI clips, but that, along with virtual-instrument hosting, has now been added.) 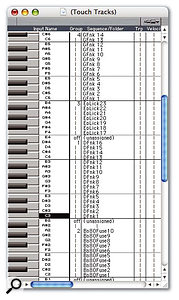 Using the Touch Tracks object, complex MIDI sequences can be assigned to single MIDI notes, so that you can trigger them quickly and easily.

Unlike other Environment objects, Touch Tracks has no actual output, though there are 'placebo' outlets that you can cable for no particular reason. It also has the requisite Parameter Box, but again the settings are irrelevant. Touch Tracks does require MIDI input, and as usual you can provide that either by assigning the Touch Tracks to an Arrange track and feeding it either live or sequenced MIDI, or by cabling some other, MIDI-emitting Environment process into the Touch Tracks object. The latter method offers interesting creative possibilities, which I'll come to a little later.

Touch Tracks has its own window, resembling that of the Mapped Instrument object, for assigning incoming MIDI notes to the objects (sequences or folders) to be triggered. Parameters available on a per-note basis include group assignment (1-99 or Off), MIDI transpose, velocity offset, trigger mode, trigger-start quantising, and trigger delay (in note increments or ticks). Transposition and velocity-offset settings apply to all notes played by the triggered sequence or folder. Trigger modes include Single, Gate, and Toggle, with a looping option for the last two. The trigger-start quantising options are a little sparse — off, 16th, quarter, and whole note — but those are enough to compensate for sloppy playing.

Let's start with a simple example illustrating two basic ways to use Touch Tracks. Suppose you have a collection of individual MIDI sequence objects for guitar, bass, and drums; some might be loops, others single phrases. The first step is to create Arrange tracks assigned to guitar, bass, and drum instruments — whether hardware or software, sampled or synthesized. One approach is to arrange the MIDI sequences end to end on the appropriate tracks, then drag each sequence to a key in the Touch Tracks window. Typically you would assign sequences for the same instrument to adjacent keys, and assign each of those keys to the same group, so that at most one clip for each instrument would play at a time. You would then mute the sequence objects in the Arrange window, start Logic playing, select the Arrange track assigned to the Touch Tracks object, and trigger the sequences from your MIDI keyboard. If you record the process, you will get a sort of 'meta-sequence' for triggering your Touch Tracks performances.

A more structured approach, starting with the same elements, would be to arrange the sequences in the Arrange window into groups that play well together. You might, for example, pair guitar and bass lines that work well together, pack the resulting pairs into folders, make several aliases of each folder, pair the aliases with appropriate drum loops, pack those pairs into folders, and assign each of the resulting folders to a Touch Tracks key. Individual keys would then trigger trio clips that always work together. Alternatively, you might assign the bass-guitar pairs to zones of Touch Track keys to allow transposition, then assign the drum sequences to individual keys, since you rarely want to transpose drum sequences. In practice, you'll typically use a blend of the two approaches — combinations for the basic grooves and individual sequences for flavour.

Bear in mind that using Touch Tracks to trigger individual audio loops loaded into a sampler doesn't make a lot of sense — you might as well simply play the sampler directly! But using Touch Tracks to trigger a series of sampler clips is a viable option. Once you have a Touch Tracks (or several) stuffed with clips, you can subject its input to a variety of Environment processes. One of my favourites, which is particularly good when the Touch Tracks triggers folders of sequences that work together as described above, is to randomise the incoming notes. That in turn randomises the choice of sequence or folder played by the Touch Tracks, not the actual data, and the result is a kind of fool-proof instant composition tool. 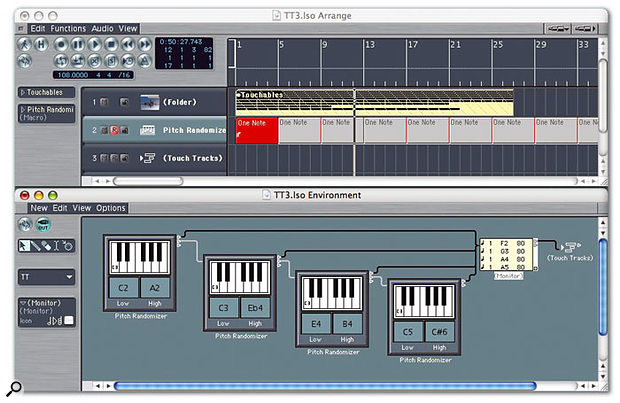 Get Logic to write your tracks for you! First, assign groups of bass, drum, electric piano, and guitar MIDI sequences to different Touch Tracks key zones, with all sequences for the same instrument assigned to the same group. Four pitch randomisers can then be used to convert each incoming note into four random notes, one in each key zone. A looped one-note sequence will then trigger the Touch Tracks via the randomisers every time it repeats.

A really playable Touch Tracks song can take a while to set up, but the rewards in real-time song manipulation are worth the effort.