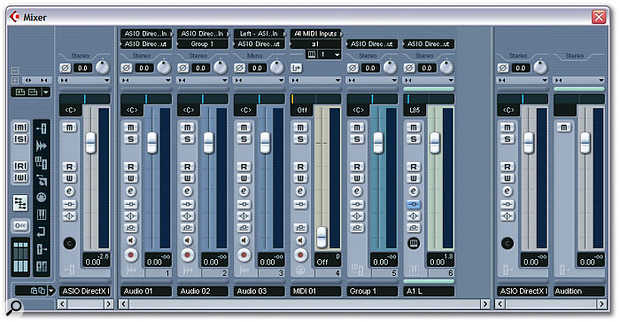 We take a look behind the behaviour of Cubase 's most common mixing controls, to show the many options beneath the seemingly simple surface.

Cubase SX's Mixer is a part of the software that you're likely to use quite a lot, and while its controls appear fairly straightforward, there's a great deal of extra functionality hidden beneath the surface. This month I'm going to reveal some of it.

The main Cubase mixer is represented by the Mixer window, which can be opened by selecting Devices / Mixer or simply by pressing F3. (Cubase SX 3 actually offers three functionally identical Mixer windows from the Devices menu, that can each be configured separately to show different views of the channels in a Cubase Project, but we won't be focusing on this particular aspect of the software in this month's column.) A channel strip appears on the Mixer for every audio, MIDI and Group channel track on the Project window, along with the output of any VST Instruments or Rewire devices you might also be using.

The most conspicuous objects in each channel strip are the level fader, used for setting the output level of a channel, and the level meter, which gives visual feedback of the level of a channel. By default, each level fader is set to 0dB for an audio track (which means that nothing is added or taken away from the signal), and is 'off' for a MIDI track, so that no MIDI volume data is sent. Level faders can be adjusted by simply dragging them with the mouse, or you can make a fader 'jump' to a specific point by clicking anywhere on the fader's path.

This Jump behaviour can be configured with the Slider Mode option in the User Interface Control Panel of the Preferences window. If you set Slider Mode to Touch, you'll only be able to drag the fader itself and clicking along its path will have no effect — which can be useful for preventing accidental clicks from altering your mix settings. However, you can still make a fader jump to a new position in Touch mode, if desired, by Alt/Option-clicking in the fader's path.

The third setting for Slider Mode is Ramp, which enables you to drag the fader as normal, but the fader smoothly slides to the new position, while you hold the mouse button, if you click in the Fader's path, rather than jumping to the new position. Again, you can override the Ramp behaviour by Alt/Option-clicking in the fader's path to make it jump to that position instead. 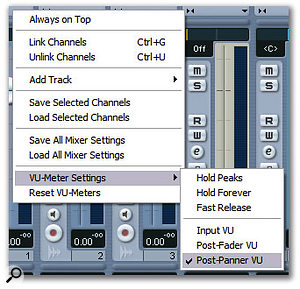 Cubase SX 3 offers extra flexibility for configuring the behaviour of the Mixer's VU meters via the VU Meter Settings sub-menu, available from a pop-up menu if you right-click on the Mixer window.

The level meters indicate the level of the signal currently going through that channel on the Mixer. For MIDI channels, the display on the corresponding level meters is based on the velocity of the notes. If you would like the level meters to hold the positions of signal peaks, you can enable this feature by right-clicking in an empty part of the Mixer (on a level meter itself, if you like) and ticking VU-Meter Hold. In SX 3, this setting is located in the VU Meter Settings sub-menu of the pop-up menu that appears, and is called Hold Peaks. The setting affects all level meters, including those on the Track List of the Project window. You can adjust the length of time for which a peak is held with the VU-Meter Peak Hold Time setting in the VST panel of the Preferences window. The default time is 3000ms (three seconds), and you can set it to a maximum of 30,000ms (30 seconds)! Alternatively, if you want the peaks to be held forever, in SX 3 you'll notice another option in the VU Meter Settings sub-menu called, unsurprisingly, Hold Forever. This option is used in conjunction with the Hold Peaks option. A final setting to allow the level meters to respond faster to peaks is provided too: it's known as VU-Meter Fast in the original SX and Fast Release in SX 3.

Here are three shortcuts that are extremely useful to know about. While they apply to any Mixer control in Cubase, they're especially indispensable when you're working with the volume and pan controls.

Sounds straightforward. However, the pan control isn't quite that simple after all, since without some form of compensation it's possible for signals to sound unnaturally louder when they're panned centrally — there's output from two speakers, compared to when a signal is panned hard left or right, when there's only output from one. The solution, simply put, is to attenuate the signal as it passes through the centre. This behaviour is known as pan law.

You can adjust the amount of attenuation with the Pan Law Mode setting in the Project Setup window (press Shift+S to open). Cubase offers three choices.

The default pan control in Cubase, where you can pan a sound from left to right in the stereo field, is known as the Stereo Balance Panner, although in the case of stereo audio tracks, if you right-click on a pan control you'll notice that Cubase provides a choice of two additional types of pan control for each channel. The Stereo Dual Panner gives you two Balance panners in the space of one, so that you can control the panning for each side of a stereo signal separately. The Stereo Combined Panner puts both left and right controls in the same field, with a filled blue area between them to show the width of the field. The left and right controls are linked by default, but you can move them independently by Alt/Option-dragging. The filled area between the two sides is red if left and right channels are reversed.

The Input and Output Settings section of the Mixer provides extra controls for audio (left) and MIDI channels. In Cubase SX's extended Mixer since version 2, there's an additional Show Input and Output Settings button that reveals a few extra channel strip controls for audio and MIDI channels. For audio channels, this extended section allows you to set the input and output busses of the channel, reverse the phase of the signal, by clicking the Input Phase button, or adjust the input gain (prior to any processing by insert effects or the channel's own level fader) by dragging the Input Gain rotary control with the Shift key held down. The use of the Shift key is just to stop you accidentally adjusting this setting. You can, alternatively, just double-click the Input Gain value field and type in a numeric parameter manually.

Time For Your Solo

The Mute button allows you to temporarily remove a channel's output from the mix, while, alternatively, the Solo button isolates a particular channel so that only that channel's output is heard. These buttons are fairly simple to use: click a channel's Mute or Solo button to mute or solo that channel respectively, and click it again to deactivate the mute or solo on that channel. You can also toggle Mute and Solo on the currently selected channel on the Mixer (or the currently selected track on the Project window) by pressing 'M' or 'S', respectively.

However, there are many other handy features related to the Mute and Solo buttons. For example, if you mute or solo many channels, it can be a pain to deactivate every button one by one, especially if you have a Project with a hundred channels, so a quick way to disable any active Mute or Solo buttons is to click the Unmute All or Deactivate All Solo buttons in the Common Panel of the Mixer. These buttons are also duplicated at the top of the Track List on the Project window. You'll notice that as you enable Mute and Solo buttons on a Channel, the Unmute All and Deactivate All Solo buttons light up to show that they can be clicked — a bit like a fruit machine (or a slot machine if you're American!). If you solo a MIDI channel that plays through a VST Instrument, that VST Instrument's output channel will automatically have its Solo button activated. The same behaviour is also true for audio channels routed to Group channels, and MIDI channels that play through a Rewire device.

If you use the Solo feature regularly, you'll be aware that while you can solo a channel to isolate it from the rest of the mix, you can also click additional Solo buttons to include the output from other channels as well. This is fine, but it means that if you solo one channel and then want to solo a second channel without the first one playing as well, you have to manually deactivate the first channel's Solo button, in addition to clicking the Solo button for the second channel.

A channel stays in Solo Safe mode until you click its Solo button again, with or without the Alt/Option key. Rather annoyingly, though, in SX 3 muting and then unmuting a Solo Safe channel will also remove the Solo Safe setting, which is a behaviour I really hope Steinberg change in the future!