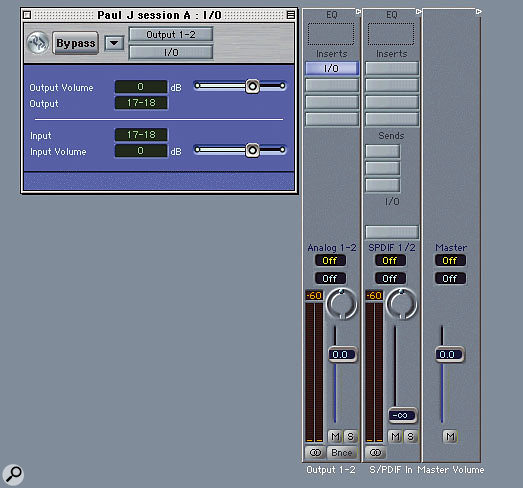 Find out how to use the I/O plug-in within an Output Audio object, and also learn how Logic's improved plug-in delay compensation allows some powerful new mixing techniques.

While Logic comes with a whole raft of great effects plug-ins, it's still sometimes useful to be able to patch a cherished piece of hardware into one of Logic's insert points. While using hardware in a track insert point might raise latency issues, no such problems arise when you insert a processor into the main stereo Output Audio object, as the whole mix is passed through the unit.

The advantage of patching into the Output Audio object's insert point, rather than simply feeding your soundcard or interface into the processor, is that you can bounce the mix to a stereo file within Logic and still take advantage of your hardware processing without any fiddly re-patching. Plus, if the external processor can be connected digitally via S/PDIF, then you don't even have to leave the digital domain — the journey out through the soundcard's D-A converters and in through its A-D converters has the potential to subtly degrade the sound otherwise.

Logic's manual reveals that there is a plug-in, tucked away in the Helper plug-ins menu, called I/O. Bringing this up in any Audio object's insert point allows you to route audio to and from an external device via any spare physical connectors on your audio interface. The only controls this plug-in has are input and output level sliders, plus two menu windows for selecting the output destination and the input source.

As I use a MOTU 828 audio interface with Logic, I thought it would be interesting to use this plug-in to insert my Drawmer 2476 Masterflow mastering processor into the main Output Audio object of one of my Logic Songs in order to process the whole mix, and I decided to use the S/PDIF sockets on the 828 for the purpose.

In theory, this should have meant plugging in two co-axial S/PDIF cables, setting up the I/O options in the plug-in to the S/PDIF inputs and outputs (numbered 17 and 18 on the 828) and setting the Drawmer box to external S/PDIF sync. However, when I first tried this, things didn't work out quite as I'd hoped. Although the Drawmer unit was receiving signal and obviously producing an output, nothing was being routed back into Logic, despite the MOTU interface status LEDs telling me that valid S/PDIF data was being received. The solution to this problem turned out to be something not made entirely (or at all!) clear in Emagic's Logic manual: for some reason, the I/O plug-in won't receive any input signal unless a separate Environment Input object has been set up with the same source parameters. Out of desperation, I created a stereo Input Audio object, set it to receive its signal from the 828's S/PDIF input — even with the object's output selection blank, the input to the previously set up I/O plug-in sprang to life.

Having contacted Emagic about this, apparently the behaviour only pertains when using the I/O plug-in on an Output Audio object — if you insert it into a channel, it behaves exactly as expected, with no need to create any other Audio objects.

A Confusion Of Multis

The prefix 'multi-' can be applied to just about everything — unfortunately often in confusing ways. To help clear things up, here's an annotated look at the more common uses of the prefix, in and out of Logic, with examples using four well-known software instruments: Emagic's EXS24 sampler, Native Instrument's Kontakt sampler, Virsyn's Tera synthesizer, and Linplug's RM IV drum machine.

Multi-output: When 'multi-channel' is used in the sense of 'multitimbral' to refer to instruments that respond to different MIDI channels with different sounds, 'multi-output' is often used to classify those with multiple audio output channels. As mentioned, EXS24, Kontakt, Tera, and RM IV are all multi-output in that sense.

Multisample: Although most instruments that play samples can hold multiple samples in memory, multisampling is the ability to map different samples to different key and velocity zones for MIDI playback. EXS24 and Kontakt both handle multisamples. Sample-based drum machines in general, and RM IV in particular, are not typically referred to as multisampled instruments, even though they assign different samples to different virtual pads. That distinction is becoming somewhat blurred. For example, the RM IV can assign each virtual pad multiple samples, triggered by different MIDI pitches and velocities.

Multitimbral: this typically refers to a synthesizer or sampler's ability to play different sounds on different MIDI channels. The term 'multi-channel' is also often used for this characteristic, causing confusion with the use of that term for multiple audio outputs. Kontakt and Tera are multi-timbral, whereas EXS24 is not. Another common confusion arises with drum synths and samplers, which assign different sounds to each of their virtual pads. As with 'multisample', the distinction is blurred by the ability of modern drum machines to freely assign MIDI channels, note ranges, and velocity ranges to multiple samples loaded into a single pad.

Multi-voice: this is sometimes used to mean multitimbral, but is more often used to mean 'polyphonic'. Len Sasso

Using Compression As A Send Effect

Back in SOS July 2001, I discussed some of the wide-ranging possibilities of the side-chain compression technique, also sometimes referred to as invisible or parallel compression. This involves combining compressed and uncompressed signals, contrary to common wisdom about the use of compression as an insert effect. Three years ago, when I wrote that article, Logic's plug-in delay compensation didn't work well for Buss Audio objects, so duplicating Track Audio objects was the only way to access the effect, which limited its use at the mixing stage. However, since then the implementation of the plug-in delay compensation has been improved, and you can now send to a compressor plug-in inserted in a Buss Audio object without the returned signal phasing with the original. As a result, you can now set up a compressor to be a send effect like any other.

So let's have a brief look at how you might use the new options this opens up. First of all, it's now practical to use side-chain compression on multitrack drums, because you don't have to duplicate all the individual audio objects for each drum track and set up a fistful of compressor plug-ins. Side-chain compression is particularly useful with drums, especially if you want to get pumping compression effects without destroying the transient impact. Changing the different send amounts from each individual drum track makes a real difference to the way the drums sound overall, because the compressor will only pull out the detail from the tracks you send it.

Although side-chain compression is probably most useful with drums and percussion, other instruments that have a lot of transient detail can also benefit here. Examples which immediately spring to mind include piano and acoustic guitar — in both cases you can increase the body of the sound while keeping the playing dynamics fairly natural.

In the analogue domain, compressors often dull the sound when processing heavily, so side-chain compression also has a reputation for adding low end weight and warmth. Logic's compressor plug-ins don't really work this way, but that doesn't mean that you can't use the same principles. Let's say that you insert a Low Pass Filter plug-in into the Buss Audio object before its compressor. Now if you send to that Buss object from a bass track, you'll not just boost the low frequencies, but you'll also make them more even. The result: an increased sense of weight and body to the sound, beyond what could be achieved just using EQ. And, of course, the great thing here is that you can also send to this bass-enhancement compressor from other tracks as well, determining how much the compressor contributes to the sound by balancing each track's fader level and the send to the relevant Buss Audio object. On the other hand, you can also use a similar technique on the high end to create an effect similar to the Enhancer plug-in, although this is an effect that is less likely to need applying to multiple channels, I'd have thought.

If you really want to go to town, you could even try inserting a Multipressor plug-in rather than any of the full-band compressors. However, in this case, you'll have to make sure that the Lookahead facility within the plug-in is turned off. By default it's set to 5ms, so pull it down to zero. Because the compressor's in the side-chain, you can completely smash up the audio with it if you like, because this won't change the source sound at all, just what the plug-in is adding to it. However, setting up all those bands of compression is, in the majority of cases, probably a task for which life is too short. Given that there's so much scope with full-band compression, you'd be best advised to stick to that most of the time.