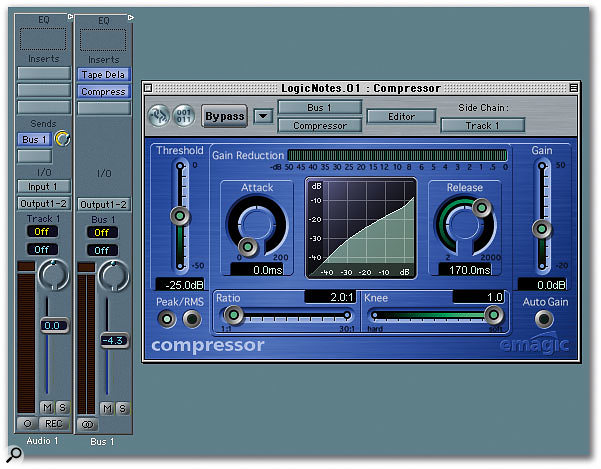 Here you can see how to set up Logic to emulate the TC Electronic TC2290 ducking-delay effect.

Learn how to combine dynamics processing with delay and reverb to breathe life into your mixes.

One of my favourite interviews in SOS was back in December 1999, when we interviewed the producer Al Stone about his production work with Jamiroquai. When the topic moved to mixing, he mentioned that he's a fan of using TC Electronic's old TC2290 delay unit on vocals, one of the reasons being that it allows you to "suppress the delay until the vocal line is finished, so it doesn't clutter". In other words, the delay effect is kept low in level while the vocalist is singing, helping the words to remain intelligible, but is then allowed to bubble up in the gaps between phrases.

Although you could reproduce the action of the TC2290 in Logic using the automation facilities, this would quickly become a tedious job on all but the most simple of vocal lines. However, there is another way to recreate TC Electronic's dynamic delay effect by using Logic 's flexible side-chaining facilities.

Emulating The TC2290 Delay In Logic

The first thing to do is set up a standard delay effect. For this example, let's say that your vocal line is playing back through the first Track Audio object, and that you're using the first Buss Audio object to return the delay effect. Create a send to the buss from the vocal Track object by selecting from its drop-down Sends menu. This creates the audio routing from the Track object to the Buss object, into which you should now insert a delay plug-in of your choice. I find that the Tape Delay plug-in is a good one for understated vocal treatments, so that's what I'd tend to use. Just make sure that the mix control of the delay is set to 100 percent wet, so that no dry signal comes through the Buss object. (Although Logic 's plug-in delay compensation should prevent phasing problems, any dry signal coming through the Buss object will still mess with your mix's vocal balance.) With the routing set up, you should be able to fade up the send level on the vocal Track object and hear the delay effect appear. You'll need to decide on the delay plug-in's settings at this point, but don't worry about setting the return level properly for the moment.

The next stage is to set up the dynamic element of the effect. Insert a Compressor plug-in into the Buss object after whatever delay plug-in you've chosen. In the plug-in window's pull-down Side Chain menu select Track 1, so that the level of vocal signal will control the compressor, not the level of the Buss object's delay effect. For the moment, set the Ratio to 2:1 and the Release control to about 150ms, leaving the Attack control at its default zero setting. Now switch of the plug-in's Auto Gain function and adjust the Threshold parameter until you get the desired modulation of the delay effect — you'll need to tweak the Buss object's fader level in tandem with this to get the delay sitting correctly in the mix. As a rough guide, I got the kind of effect I was after with the gain-reduction meter showing 8-10dB of reduction while the vocalist was singing. 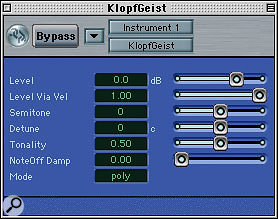 Perhaps as a reaction to the increasing complexity of their sequencer, a group of Logic users from the Sonikmatter forum (http://community.sonikmatter.com) decided to go back to basics by launching a competition to create an entire track using only Logic 's built-in metronome instrument Klopfgeist as a sound source. Entrants were allowed to use up to 16 instances of the metronome, in addition to around 30 basic plug-ins. Despite these restrictions, a short list of six tracks was eventually posted for voting purposes, and you can have a listen to them for yourself by surfing over to http://ttsh.co.uk/klopfgeist/tracks.

Here's another nice stunt you can pull by controlling a reverb dynamically, but this one works in the opposite way. It's not uncommon to have your vocal mixed pretty dry during its quieter moments, but to then add more reverb as the performance hots up, and you can set Logic up to adjust reverb levels like this automatically. The first thing to do is to create a new track in the Arrange window, and to put an Alias of your vocal region into it. Once you've assigned a new Track Audio object as the Track Instrument, you should get the identical vocal signal appearing on both channels. Unassign the output of the duplicate track, so that it doesn't directly influence your vocal mix level. 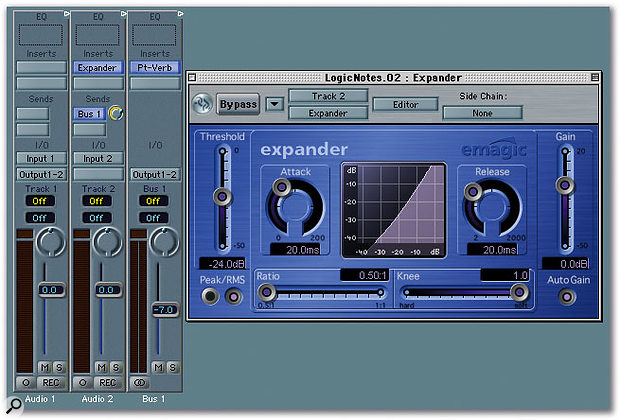 By placing an Expander plug-in before your vocal reverb, you can keep the sound drier in the quieter passages than in the louder passages.

Your aim now is to use plug-ins to make the dynamics of the new track more extreme than those of the original, and then to feed your chosen reverb from this track. If you're already using compression on the main vocal, then it's easy — just leave out the compression on the duplicate track. However, if you're not after a compressed lead-vocal sound, or if the audio file you're working from is already compressed, then you need to expand the dynamics of the duplicate.

As a starting point for doing this, to insert an Expander plug-in into the duplicate track, setting the Ratio to 0.5:1, the Attack and Release times to 20ms, and the Peak/RMS setting to RMS. Now play the track and compare the track level meters while you adjust the Threshold control. If you can get the meters of the duplicate track to be higher than those of the original during the loudest moments, and otherwise below them, then your settings will be in the right ball park. Now you can send from the Duplicate track to your reverb and set its return level to taste. If you find that the modulation is too dramatic, then head for the Expander plug-in's Ratio control — as you move this towards 1:1, the dynamic changes will get more subtle.

Finally, here's a little tip for when you're using bright reverbs with vocals. You know the problem — those 'S' sounds hit the reverb like Indiana Jones' worst nightmare! The accepted wisdom on how to get around this problem is to use a de-esser on the feed to the reverb, but the De-esser plug-in in Logic is a little too tame for this purpose — even if you crank it as far as it will go, a lot still gets through. So I use a little-known facility within the Noise Gate plug-in to duck the offending 'S' sounds more severely. Here's how you do it.

First, insert a Noise Gate plug-in before the reverb plug-in you're using. Adjust the Attack and Release times to 1ms, the Hold time to 50ms, and Low Cut to around 7kHz. With the Range parameter at about -20dB (enough to hear the action of the gate), adjust the threshold so that the gate only opens on the 'S' sounds. Once you get the Threshold pretty much right, fine-tune the effect using the Low Cut and Hold parameters. Finally, change the range setting to +20dB, and the Gate will now act in reverse, ducking all the sibilant consonants by 20dB. The sound of the reverb feed itself will be pretty awful and lispy, but you'll not notice anything amiss once the signal's been through the reverb and is combined with the dry signal again.