There's an outbreak of literary criticism in this month's column, as we take a look at some of the Pro Tools books currently doing the rounds.

If you want to know the extent to which Pro Tools has become the industry standard for digital audio workstations, try typing it into the search engine at an on-line bookshop like Amazon. I counted something like 17 different books covering every aspect of the program's use, from audio editing to surround mixing, at every level. And over the past few months, a small pile of these has built up on my desk, so for this month's Pro Tools Notes column I thought I'd take a look at three of the most popular. 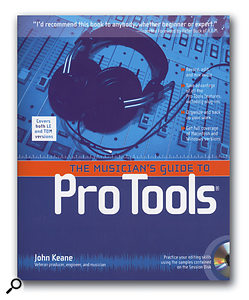 I'm probably not giving too much away when I say that my favourite, by a long way, is still John Keane's The Musician's Guide To Pro Tools (ISBN 0072231750). Now with a new publisher, McGraw-Hill, the second edition has been updated to cover Mac OS X and Pro Tools 6 — but the changes go a lot further than merely catching up with new developments in Digi-world. What was a svelte 118-page paperback now runs to more than 400 pages, and the new material is every bit as informative, well-researched and entertaining as the older stuff. Keane is a studio owner whose Pro Tools chops have been tested with the likes of REM and the Indigo Girls, and the great thing about his book is the way it focuses on situations that working engineers find themselves in every day. It's a book about the problems that arise during actual recording sessions, and how to deal with them using Pro Tools; the lessons stick because you're not learning them in an abstract, theoretical context, but in real-life situations. As before, you get a CD-ROM of real performances to work on, and Keane takes you through the everyday editing and mixing procedures in a friendly, clear and often amusing way. ("A kernel panic is a new, improved way for Macintoshes to crash.")

The attention to detail on the part of Keane and his editors also puts a lot of music technology books to shame. He covers Windows XP in the same depth as Mac OS, and whenever there are relevant differences between the LE and TDM versions of Pro Tools, they're always covered. What's more, despite the huge amount of additional content, the second edition of The Musician's Guide To Pro Tools is actually £10 cheaper than the original was at £24.99. As the title suggests, it doesn't cover every aspect of the program, but if you record and mix music with Pro Tools I can't recommend this book highly enough.

Although the title is similar, and it's also in its second edition, Mike Collins's Pro Tools For Music Production: Recording, Editing & Mixing (Focal Press, ISBN 0240519434; £29.99) is a much more general book, which combines some practical tips with an overview of the system. He begins with a brief history of the Pro Tools platform and Digidesign's product range, before moving on to listing some things to bear in mind when choosing a computer. There is some useful discussion here, but to my mind, his preference for Macs doesn't excuse the near-complete lack of information about running Pro Tools on the PC platform. Rather than introduce basic Pro Tools elements such as the Edit and Mix windows, Collins then launches straight into an in-depth guide to MIDI recording. Again, there's plenty to digest, but it seems an odd way to kick off a guide to Pro Tools, especially since the chapter on virtual instruments is right at the other end of the book.

It's not until the next chapter that we get into the meat of the program, when we learn about audio recording. Collins begins this by dispelling some popular misconceptions about digital audio, though unfortunately he has a few of his own to throw in. There is still much here that is worth knowing, but as with the rest of the book, the organisation and editing could be more helpful, and the author seems uncertain whether he's writing for beginners or advanced users. Basic concepts are covered, but not in an exhaustive way — for instance, it never tells you how to create or record-enable a track, or that you need to do this in order to record audio — and they're interspersed apparently at random with discussions of much more advanced features and techniques. There is extensive information on the finer details of track counts and voice allocation in Mix and HD systems, but nothing whatsoever about the restrictions of LE rigs. 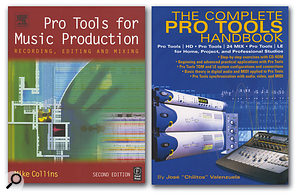 Similar niggles undermine the usefulness of the following chapters, which cover editing, mixing, and plug-in use within Pro Tools. In each case there are some genuinely handy tips, but also some fairly egregious omissions (no mention, for instance, of the fact that RTAS plug-ins can't be used on aux tracks in TDM systems, or that LE versions don't include Beat Detective), and no obvious rhyme or reason to the ordering. It won't be thorough or patient enough for beginners, but nor does it always go into the sort of detail that might benefit an advanced user. Collins's recording and mixing examples often make reference to a project of his own, but this hasn't been included on a CD-ROM, which makes the examples less helpful.

Apart from a useful appendix about transferring projects between systems, the remainder of the book seems rather lightweight, consisting of short descriptions of some of the more popular soft synths that are available for Pro Tools, a brief introduction to Rewire, and a not-entirely-relevant introduction to the other MIDI + Audio sequencers that are available for OS X. There are nice touches such as the use of full colour screen shots throughout, but overall, it's a pretty frustrating read — it's clear that Mike Collins does have worthwhile experience and information to pass on, but it's a shame that he didn't organise it more effectively, or bother to find out about Windows machines and LE systems. Most Pro Tools users will pick up some useful tips here, but a fair few gaps would need to be filled to turn it into a coherent or thorough guide to the program.

The Complete Pro Tools Handbook by José 'Chilitos' Valenzuela (Backbeat Books, ISBN 0879307331; US $49.99 plus P&P) is the most imposing of the three books thanks to its sheer size. However, it's also the most dated-looking, thanks to the use of version 5 Mac OS 9 screen shots throughout. Although there are occasional mentions of Pro Tools 6, Valenzuela doesn't discuss OS X or the new features in version 6, and still includes material on OMS that's only relevant to legacy versions of Pro Tools. Like Pro Tools For Music Production, it's also pretty light on Windows information.

The overall approach is similar to Collins's book, beginning with the various hardware elements of the Pro Tools system before going on to describe the software. It's certainly more organised and more consistent in its level, but is less concerned with how the program is used in actual recording situations, and instead takes us on a systematic and rather painstaking walk through Pro Tools ' functions and menu structure. For all that it claims to contain "Beginner and advanced practical applications", the bulk of it is pitched squarely at those who've never used a DAW before (although you'd hope that even a novice wouldn't really need an entire paragraph explaining the operation of the Quit command, complete with screen shot).

The overall impression is of an alternative to the Pro Tools manual, and if you think of it like this, The Complete Pro Tools Handbook does have something to offer the new user. It's very clearly written and laid out, and explains everything in a patient, thoughtful style. The reader who will benefit most of all is perhaps one who doesn't yet have a Pro Tools rig (and thus doesn't have the manual!), but is considering whether to buy one. If you've been a Pro Tools user for a while I don't think you'll get much out of Valenzuela's book, but if not, it provides a good overview of both the software and the different hardware options available, and would be worth reading if you're in the market for a new DAW.

After more than four years in charge of the Pro Tools Notes column, Simon Price has decided to pass the torch on, although he'll continue to contribute to Sound On Sound in other areas. Simon's knowledge and experience have been invaluable, and I can't let him go without saying 'Thank you!' From next month, we'll have a new Pro Tools Notes columnist in the shape of Mike Thornton, MIBS. Mike is a Pro Tools specialist in both recording and audio post-production with experience in Dolby Surround and 5.1, and we wish him the warmest of welcomes to these pages.