Keeping your Pro Tools plug‑ins up to date is vital if you want to maintain a reliable system — and now there's a utility that will do it for you.

Mark Trombino's Plug Tools application, which audits the plug‑ins on your system (left) against its own database (right).

The challenge, though, is finding the offending plug‑in, and in practice one often ends up spending ages moving plug‑ins in and out of the plug‑ins folder and restarting Pro Tools to see whether it remains stable.

There is no comprehensive resource that lists all the versions of all plug‑ins, and their compatibility with every version of Pro Tools, though there is some compatibility information in Digidesign/Avid's Knowledge Base page at http://avid.custkb.com/avid/app/selfservice/search.jsp?DocId=343311. This is a good place to start, and Digidesign have been working hard to make it more comprehensive, but it still doesn't cover all the plug‑in manufacturers.

The idea is that to check if you are up to date, you have to have this document open in your web browser and your plug‑ins folder in another window. You then work your way down, checking the version number you have against the recommended version number on the Knowledge Base page. This involves lots of scrolling up and down, because the plug‑ins on this page are grouped by manufacturer, whereas the plug‑in folder is listed by plug‑in name. Sometimes it isn't clear who makes a particular plug‑in, and when you encounter one that isn't on the Knowledge Base page, you have to search through the manufacturer's web pages in the hope of finding the latest version, as well as confirmation that it is compatible with your version of Pro Tools.

Examples of plug‑ins in my plug‑in folder that aren't listed on the Knowledge Base page at the time of writing are the AIR plug‑ins (instruments are listed but not effects plug‑ins); Nomad's BBE Sonic Sweet D82, H82 and L82; some of the bx‑digital plug‑ins, namely bx_cleansweep and bx_solo; all the Massey plug‑ins; most of the Neyrinck plug‑ins; all the Minnetonka and PSP plug‑ins, TC Electronic LM5D... and there are more.

Given that the Pro Tools plug‑in standards are not open like VST, you'd think that Digidesign must have an up-to-date database in a convenient form, and perhaps even an application that could do the checking against a database for you. Well, there is one — but it hasn't come from Digidesign.

In the absence of an official solution, Pro Tools user Mark Trombino created a free application called Plug Tools. I am sure Mark wouldn't mind me describing the first version as a little crude, but with the help of other Digidesign User Conference users over the subsequent months, he has improved it substantially. The thread is one of the 'stickies' at the top of the Pro Tools HD Systems on Mac OS section of the DUC, so LE users might have missed the thread. Plug Tools is currently Mac‑only, but one would imagine it wouldn't be that difficult to produce a PC version.

One of the problems Mark has been working to overcome is the lack of a reliable central database to use as a reference. In the end, he created a database of his own, at http://emptymusic.com/software/plugtools/plugintable.php. This is like a Wiki for Pro Tools plug‑ins, enabling users to update the database when a new version of a plug‑in comes along. It even includes download locations so that you can download the new version straight from the Plug Tools database. This is an excellent example of 'crowd sourcing' to find a solution to a real problem.

The Plug Tools window is split into two parts. The left‑hand side shows the list of the plug‑ins you have installed, while the right‑hand half shows one of three options, depending on which tab you select. The Plug Tools Plug‑in table is a locally held reference list, which can be updated either from the centrally held database using the Update from Server button, or using the Update from File button if your studio computer isn't directly connected to the internet. The Plug Tools Compatibility tab displays the on‑line database directly within Plug Tools, while the final tab displays Digidesign's own compatibility page instead, on the slim chance that their data is more up to date.

Coming back to the left‑hand half of the window, the Active column shows whether the plug‑in is in the main Plug‑ins folder or the Plug‑ins (Unused) folder, and you can move plug‑ins from one to the other by checking or unchecking the box. There are then columns to display the vendor, the plug‑in name, what version you have installed, the most up‑to‑date version the database knows about, an info column and a URL for downloading the latest version. There are still some gaps but as we, the users, fill in the database Mark has started, it will become better and better.

To check your own plug‑in folder for health, first make sure you haven't got Pro Tools running, as Pro Tools easily gets upset if you try to move plug‑ins around while it's open.

The first step is to Update the Plug Tools plug‑in table in whatever way suits you best, to make sure you are working from the most up‑to‑date database. Then hit the left‑hand Reload button to refresh Plug Tools with the latest data about your system. You could then work your way down the list manually checking what needs updating — but you don't need to, because Plug Tools is designed to do this for you.

Hit the Auto Mark button on the left‑hand side and you will see that Plug Tools marks all the plug‑ins it knows are up to date by changing the text in the list to green. Out of date ones show up red, while you will probably see that some remain black. This is mainly because the database isn't complete yet. For example, near the bottom of the screen above 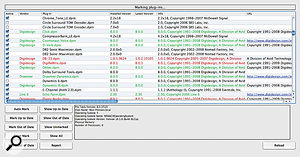 Initially, the Plug Tools database didn't include Eventide's E-Channel plug‑in, which thus shows up black (top). After I amend the database (centre) and update Plug Tools (below) everything is fine.

, the E‑Channel (Anth 2.0).dpm plug‑in is still black, because the database hasn't got the plug‑in's file name. So, using the Update plug‑in feature, I copied and pasted the file name into the database, updated Plug Tools from the Server, hit Reload and Auto Mark again, and there we have it: E‑Channel is now green.

If any of your plug‑ins do show up as out of date, as do several of my Massey plug‑ins in the screen below, clicking on the URL, if available, will take your browser to the appropriate download page. After a few downloads and running installers things got a lot greener for my system (bottom). The remaining red entry is a demo version which is inactive and in my unused plug‑ins folder.

Before and after: some of my Massey plug‑ins were shown as out of date (top). After following the download links and updating them, they turn green.

In the Preferences settings is an option to "Synchronize table colours with Finder labels”. This colours plug‑in labels within the Finder according to the table, so you can see that they are out of date simply by opening the Plug‑ins folder within the Finder.

Having got to grips with this application, I have to commend Mark for not only building an application to take the pain out of tracking and updating plug‑ins, but for developing a database that we can all keep up to date and so help each other. It surprised and even scared me how many of my plug‑ins were out of date, and I suspect that as I work my way through the black ones I will find some more. I, for one, have hit the Donate button at the bottom of the Plug Tools page on Mark's site and I hope you will too.

That said, why did it need an entrepreneur like Mark to take on this task? Digidesign license every Pro Tools plug‑in, so surely they could make it a condition of the licence that third‑party developers have to keep a central database up to date, and have Pro Tools check for new versions of your plug‑ins every time it starts?

Mark still has plans for this plug‑in. He told me "In the future, I hope that Plug Tools will not need direct user input/maintenance in order for it to function — I'd like for plug‑in information to flow both ways in the future. That is, if Plug Tools discovers a new plug‑in or new version of a plug‑in on a user's system, that it reports back to emptymusic.com automatically, so other people can benefit. If enough people use the app, I think the database would be fairly up to date most of the time.”