When you need to really open up your mix, it's time to employ some classic stereo widening tricks. We show you how to implement them in Pro Tools.

How do you create a mix that really fills out the stereo field, without becoming messy or indistinct? A lot of people dive for stereo width plug-ins, or wash synth and guitar sounds in wide stereo chorus, thinking wide is automatically good: but if you aren't careful, all this will do is produce a wider stereo mush. Alternatively, you could record as many sources as possible in mono, and pan them across the stereo field, so each of your instruments has its own place in the image.

In many cases, the best way forward is somewhere in between: pull in the width of a lot of your stereo sounds and they will have a clear space in the stereo image of your mix, while those that are left wide will have room to breathe. You will also have created the space in your mix for image enhancers and special effects to work clearly. With that in mind, let's look at what we can do in Pro Tools to enhance or alter the stereo perception of particular sources.

One well-known trick is to use a mono to stereo or stereo delay plug-in to introduce small delays in one or both sides of a stereo signal. Very short delays, of the order of a few milliseconds, aren't perceived as echoes or flams, but as changing the apparent position of the source signal. Try this effect on a kick drum and you will notice that with very small delays the drum appears to come from the side with less delay, because that is where the sound is coming from first. 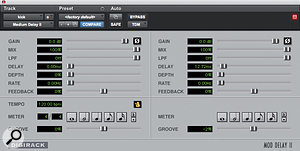 A very short delay in one channel of a stereo signal is not perceived as a delay, but as changing the position of the source signal within the stereo field. Once you get beyond 5ms of delay, the effect is less obvious, and if you go much beyond 15ms the ear will begin to distinguish the delayed signal as a separate sound, which isn't desirable. To help the steering effect, try reducing the level of the undelayed side and use the Mix control to make the effect even more subtle. Remember that you don't have to have either the delayed or the dry signal hard-panned.

You don't even have to use a plug-in to take advantage of this effect: take a mono track, duplicate it, and then use the Nudge feature to offset the copied track by a 64th‑note triplet or other suitably short interval. The effect can be stunning, making a one-dimensional mono track come alive. It is subtle yet very effective and doesn't cost you DSP power using a plug-in. Try it on guitars, both acoustic and electric, and for fattening up backing vocals.

One time-honoured way of making an existing stereo signal appear wider, and even seem to be coming from outside the stereo speakers, is to take a little of the left channel, reverse the polarity and mix it into the right channel, and vice versa. There are two ways to do this in Pro Tools. In both cases, you start by duplicating your stereo track so you have two identical tracks. Bring the fader on the duplicate track right down so that it is not sounding. Now either insert a Trim plug-in on the duplicate track and press the polarity reverse button, or use the AudioSuite Invert plug-in that you will find in the 'Other' group and process all the regions on the duplicate track only. Then, in both cases, flip the pan controls of the duplicate track so left goes to right and right goes to left. Finally, push the fader up on the inverted track and listen as the track gets wider. But be careful: push it too far and you will get a 'hole' in the middle. This trick can also play havoc with the mono compatibility of your mix.

Most stereo EQ plug-ins will allow you to have different EQ settings on the left and right channels. 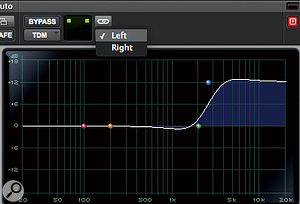 Complementary EQ settings on left and right channels will emphasise the differences between them, creating more sense of width. This can be done with the basic EQ3 plug-in, but is easier if you have an EQ like Waves' Renaissance EQ that will let you see both channels at once. 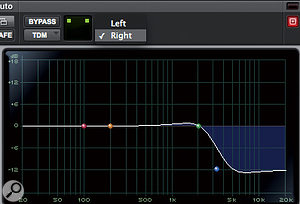 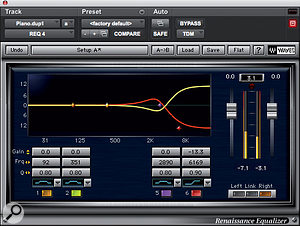 The screens overleaf show the Digidesign four-band EQ3. I have de-selected the stereo link button and then set complementary high-frequency cut and boost settings on the left and right sides in order to enhance the differences between them. However, EQ3 won't display both sides simultaneously. Waves Renaissance EQ, by contrast, does show both sides simultaneously, making the setup much easier. This produces a very subtle width enhancement, and providing you have matched your EQ settings accurately, this trick will be completely mono-compatible, as the left and right EQ bands will cancel each other out when mixed to mono.

A related technique is to matrix the stereo signal into M/S (Mid/Side) format, which lets you EQ the sides or 'difference' channel separately from the centre or 'sum' signal, before then decoding the signal back to conventional left and right stereo. We can do this in a number of ways in Pro Tools. Mac users can use the Mid/Side plug-in which is part of Steven Massey's free Massey Tools bundle, available on a separate web site from his other plug-ins (www.smassey.com/plugin.html). Put one instance in Encode mode in a plug-in slot, followed by an EQ plug-in set to split mode, then another Massey Mid/Side plug-in, this time in Decode mode, Now the left channel of the EQ plug-in will process the mid channel and the right will process the sides channel. There are other M/S plug-ins that can do the M/S encoding and decoding too, such as Waves' S1, and some equalisers, such as Flux's Epure, have this feature built in.

It is also possible to do M/S encoding and decoding with aux tracks in the Pro Tools mixer. The maths for M/S encoding is simple: M=L+R, S=L-R. Likewise, at the decoding stage, L=M+S and R=M-S. To encode:

To get back to left and right:

OK, it isn't simple, but after you've done it once you can make a template of it and quickly bring it in to any Session where you need it.

Here's a different use for impulse response plug-ins. Take a mono source signal and bus it to two mono aux tracks, panned hard left and right and grouped for convenience. Insert a Trim plug-in and a monophonic convolution reverb plug-in into both aux tracks.

Now find a relatively neutral guitar-cabinet impulse response and load it into both reverb plug-ins, invert the phase on one of the Trim plug-ins and away you go. This trick works well on Rhodes pianos, acoustic bass, and guitars. For a convincing stereo effect without much coloration, the impulse responses must be small space or cabinet IRs, not reverbs. The result is tight and dry, and when collapsed into mono there is no residual room sound, as the IRs should completely cancel out.

Give It Some AIR

There are numerous third-party plug-ins devoted to enhancing stereo width. One such is Waves' PS22, which I often use on a vocal to open it up a little; others include Izotope's Ozone and the PSP Pseudo Stereo and Stereo Enhancer plug-ins from their Stereo Pack. A stereo enhancer plug-in also comes bundled in every Pro Tools 8 system: the AIR Stereo Width plug-in. This uses a built-in M/S matrix to achieve a number of stereo processes. 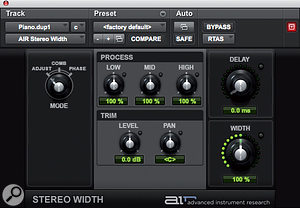 The AIR Stereo Width plug-in makes many of the common widening techniques easy to implement.

Adjust mode will produce a similar effect to the phase trick I described earlier; move the stereo Width control beyond 100 percent, and you will start to create out-of-speaker effects, as the Width control is effectively the 'S'-channel gain. There is also an EQ that is be applied to the 'S' channel only, and a delay in the right channel which can recreate the short delay trick I described above. Do try the 'Haas guitar doubler' preset. In general, the Adjust mode is good for overall mixes or any bus tracks you might have in your mix, but in this context, steer away from using the delay option. As is so often the case, it's best to increase the Width until you can hear it working and then back it off just a touch.

In Comb mode, the delay is put in the 'M' channel, so when the 'M' and 'S' signals are decoded back to 'L' and 'R', you get a comb filter effect where some frequencies appear to come from the right channel and others from the left. Again, the Width control, being the 'S'‑channel gain, controls the amount of comb filtering. As with the small delay trick, the signal can seem biased one way, so use the Pan control to compensate. This is a fairly extreme effect, so probably not best done on overall mixes, but as a special treatment on some mono signals it can be very effective.

In Phase mode, Low, Mid and High controls set the centre frequencies of three phase shifters. Again, Width controls the amount of effect. This mode is more subtle than the Comb mode, but probably still too much for overall mix treatments.

A Word Of Warning

Finally, when using any of these effects, always check your mono compatibility. I know this is less critical now that very little of our work hits vinyl, but there are still a good number of consumers listening in mono via the Internet or on the radio.