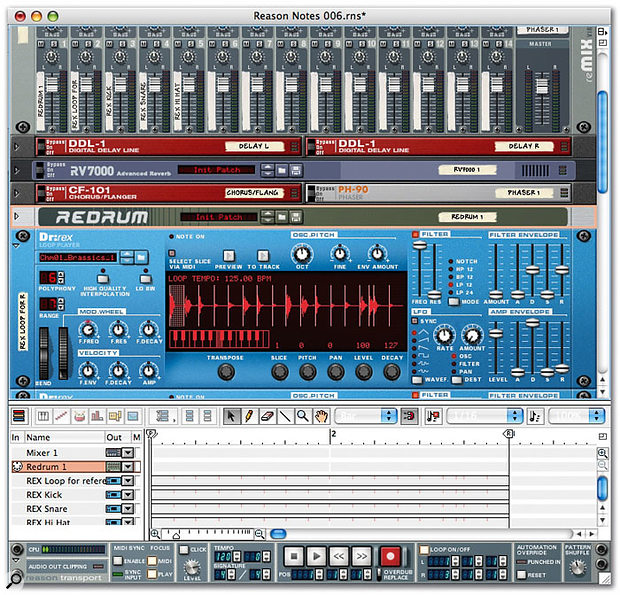 The initial rack, with Redrum and three instances of Dr:Rex, plus the 'To Track' events that trigger the loops' slices visible in the sequencer window.

Ever loved the feel of a REX loop but disliked the drum sounds? Using Reason, you can steal the feel and substitute sounds of your choice with ease.

Practically since sampling first became available, recording engineers have employed tricks for isolating drum sounds and using them to trigger new samples — perhaps to replace a weedy original sound, make a mix more contemporary, or replicate the groove played on one drum kit with the (sampled) sounds of another kit.

Something like this technique can also be achieved in Reason. We'll be using REX2 loops, as generated by Recycle and played back by the Dr:Rex device. The objective is to steal the feel of a loop and assign new sounds loaded into a Redrum kit.

In Subtractor, you can give two-oscillator bass sounds a different feel, and sometimes more edge, by enabling ring modulation with one of the oscillators tuned seven semitones (a fifth) higher than the other. A less thick sound is produced if you place the shifted oscillator one octave higher than the unshifted one.

You may not realise that Dr:Rex is polyphonic, since all it usually does is play back loops. But if, after 'To Track'-ing a loop, you highlight the slice triggers in the REX Lane and copy them — say, Alt-drag them a few 16th notes to the right — you'll enter a whole new rhythmic universe, with syncopations, rolls and fills appearing out of nowhere, depending on the source material.

Start with a rack that's empty except for a Remix mixer. Add a Redrum, and then four instances of Dr:Rex. 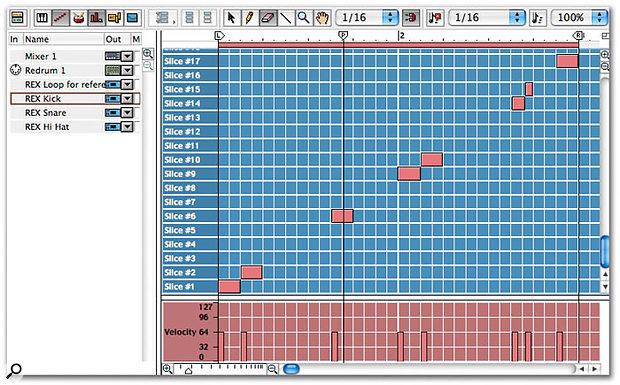 Focusing on the Dr:Rex 'Kick' track: all slices that aren't a kick drum have been erased.

For a while now, Reason has been making inroads into education, a trend supported by Propellerhead's own Teaching Music With Reason (TMWR) package. In fact, Propellerhead have become a registered content provider to Curriculum Online (www.curriculumonline.gov.uk), a government-led entity that aims to improve access to ICT (Information & Communications Technology) and multimedia resources for all pupils. Secondary schools in England can use e-learning credits to buy TMWR from approved retailers.

Around At The Back 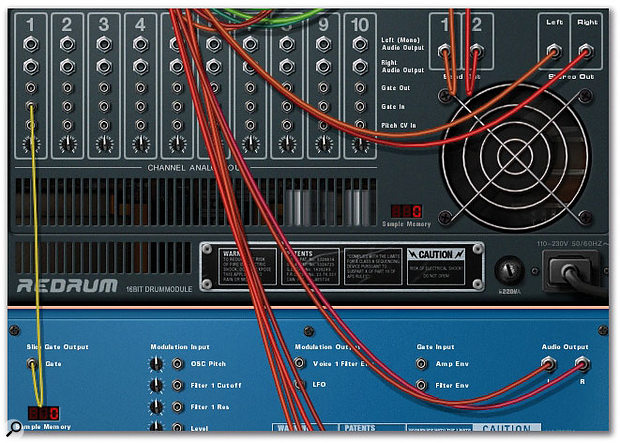 The back panel, where a Dr:Rex Slice Gate Output is linked to the Gate In of Redrum channel one. In our example, this will be loaded with a new kick-drum sample.

Don't forget that the 'feel stealing' explained in the main text works both ways within Reason. Should you really like the individual drum sounds in a REX loop, load them into Redrum and make a new kit from them! The sample browser in Redrum, and all Reason sample devices, lets you go into a REX loop as if it were a folder and audition, and then load, the individual slices that make up the loop. The resulting kit will then have the sound of the original loop, but you'll be able to write whatever patterns you like with it.

So far we've only dissected one loop. If you want to recreate more than one loop in a song you'll have to create more Dr:Rex devices and sequencer tracks for the loop slice triggers. This is unavoidable. But you only need one Redrum: using a Spider CV merging device, four Dr:Rex gate streams can be merged to one output (which would be routed to a Redrum channel).

You'll need one Spider CV for each class of slice trigger you're isolating, but once this wiring is done, the Spider CV devices themselves can be minimised and dragged to somewhere unobtrusive in the rack. Make sure that no actual merging occurs, though, unless you like the effect it produces. All you have to do is make sure that only one loop's kick, snare or whatever is playing at any one time.

Extending the Dr:Rex slice gate technique further, one could isolate rhythmic elements from the loop and use them to trigger Reason synths and samplers, adding textural changes that match the groove exactly. Another classic studio technique uses a noise gate to process a bass guitar, but triggers it from a kick-drum signal, so that bass and kick are completely tight and together. The same goes here: take a Dr:Rex Slice Gate Output connection to the trigger input of, say, a Subtractor or NN19 playing a bass patch. Write the notes for your bass line in an attached Matrix step sequencer, but use the Dr:Rex triggers to initiate the actual notes. Be prepared to play with amp envelope release times, since the triggers are very short. If this creates a bass line with too few notes — though this needn't be a bad thing — use the same technique to create a secondary bassline. Of course, the gate outs on each Redrum voice channel can also be used in the same way, to spread rhythmic integrity around the Reason rack.