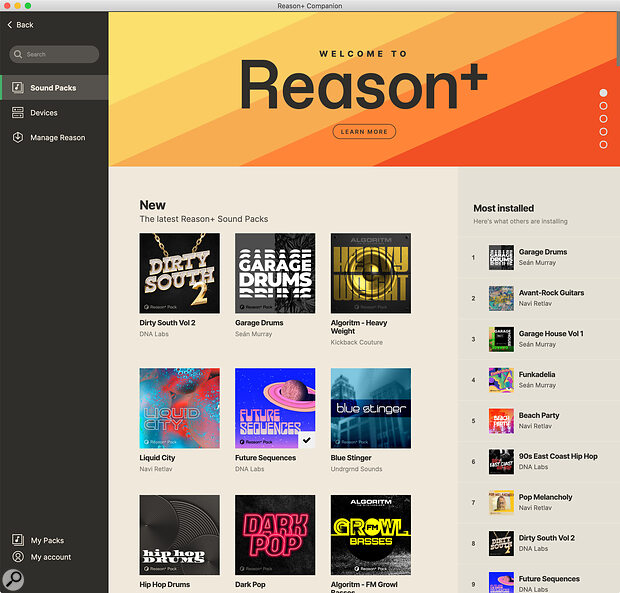 Reason+ Companion is a new hub app for managing your devices and sound packs.

This month we have a Reason double bill. We’ll figure out the important things to know about the new Reason+ package, and then take a first look around the new instrument that comes as part of that deal: Algoritm. 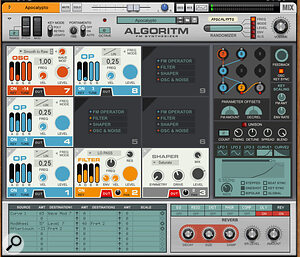 Reason+ is a subscription service that provides access to Reason and the complete catalogue of Reason Studios instruments. Although this type of subscription has become a common business model for software in recent years, it’s a major change for Reason and has ruffled a few feathers among veteran users. Reason will, however, remain available for purchase as a traditional perpetual license with paid upgrades, just as it has been historically. The premium instruments and players will also still be sold individually.

The Suite bundle, which was a way to buy Reason with all the extras, has been discontinued. If you own this (or any full version of Reason) and want to get in on the Reason+ action, you can get the first year for half price. Not a super generous offer if you, say, recently bought Suite, but at least if you’re in that situation you’ll have permanent licenses for all those instruments should you drop off the subscription later on.

Subscriptions are particularly good for new users, as they get access to all the Reason goodness with no initial outlay. Also, if you’re a casual user who only uses Reason now and again, you could opt for a month‑by‑month account and drop out during times that you’re not using it. For regular users, the annual payment option saves you two months over the year.

The price is a steep £20$20 per month. Yes, it’s cheaper than, say, a gym membership, and not an unreasonable amount to spend on a hobby, but if you’re mainly using the plug‑in you’re probably paying a comparable amount for another DAW too. 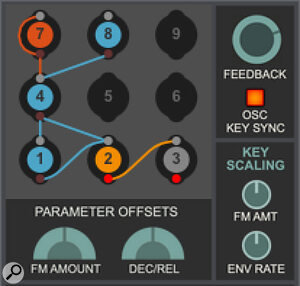 Create your own FM algorithm and module routing.

Besides Reason and all the instruments, the Plus package offers access to a library of Sound Packs that will grow on a weekly basis. This content, along with your software and Rack Extensions, is managed via a new app called Reason+ Companion.

Initially I assumed this would consist of select Refills from Reason Studios and third parties, and was therefore a generous (and ambitious) offer given the time these take to produce. In fact the Sound Packs are a new entity distinct from Refills, and are small collections of around 10 patches with a particular theme or genre. Packs can be browsed and downloaded from within Companion. A Packs link in the Reason Browser shows all the packs you’ve installed.

Hopefully this will grow and improve over time. Given that the packs are small, there’s not a huge amount to play with yet. I did a search for ‘Breaks’ and got no results. Also, having to manually drill through the pack folders to find the patches is not the slickest experience. But it’s a good idea, and will hopefully become a more compelling resource that adds value to the Reason+ package. 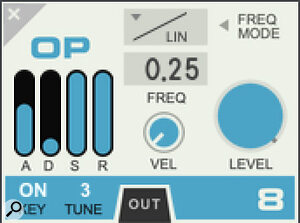 Arriving shortly after the Reason+ announcement was Algoritm, a new FM‑based synth in the Reason Rack Extension format. Reason+ includes Algoritm, or you can buy it for £99$99. I contributed some patches to the factory library, which gave me a great opportunity to get to know this versatile instrument.

Algoritm takes a different approach to the older PX7 synth, which was essentially an emulation of the Yamaha DX7. (PX7 has in fact been discontinued, apparently due to licensing reasons). Algoritm is open and flexible, and relatively easy to understand. Unlike, say, the Elektron Digitone, the usability is not gained through limiting your choice of algorithms and frequency ratios. Instead it’s the UI that makes Algoritm approachable, utilising a front panel which is dominated by a modular grid where it’s easy to build and visualise FM patches.

The 3x3 grid represents slots for Algoritm’s four different building blocks. Two of these blocks (‘FM Operator’ and ‘Osc&Noise’) are sound sources and two (‘Filter’ and ‘Shaper’) are processors. A corresponding routing panel of nine discs on the right lets you draw connections between the blocks; outputs are at the bottom, inputs at the top. You can connect the output of a block to its own input, or other blocks that route into it. A global feedback dial attenuates these circular routings.

By arranging and connecting the core FM Operator modules you can create any algorithm you like, from a simple two‑operator combo to more complex maps like on the classic Yamahas. Typically an FM synth lets you tap and blend sound from any stage to construct the output. On Algoritm, every block has an Out button, which directly routes the sound at that stage to the outputs.

The operator pitches have a primary pitch control for setting ratios down to two decimal places. They also have a detune control. An interesting feature is the Frequency Mode setting which alters the way the operator responds to modulation. In Linear mode it sweeps smoothly. In Stepped mode it quantises to harmonics. In Fade mode the output fades between harmonics, which sounds like oscillator sync.

Subscriptions are particularly good for new users, as they get access to all the Reason goodness with no initial outlay.

Algoritm’s other big strength alongside the block grid is that it includes the filter and shaper modules and a general‑purpose wavetable oscillator. This means you’re not limited to purely FM techniques and modulation for creating sounds as you are on the DX synths. The wavetable oscillator module has 20 wavetables, with a sweepable Wave Mod control for setting the position.

You could use the Osc/Noise block for designing completely non‑FM sounds, but its real power is when used in combination with the FM operators. You can blend wavetable sounds in parallel with FM sounds you make elsewhere in the grid, and you can use the wavetable oscillators as more harmonically rich FM sources modulating the Operators.

Like the Digitone and Native Instruments’ FM8, Algoritm adds filters to the mix, which can be inserted anywhere in your custom algorithms routing. You can set up a linear routing of oscillators/filter/output by activating the Output button on the final filter and no other blocks. Or you could run in parallel by tapping outputs at other stages. The Shaper module has a Mix control so you can set (or modulate) the blend on the panel.

Algoritm’s different blocks share many properties. For example they all have a big level control that determines their output gain. This of course has a large impact on the sound when that block is an FM source. All blocks except the Shaper have an ADSR envelope controlling their level. This consistency means that the modulation assignment grid (which will be familiar from most of Reason Studio’s flagship plug‑ins) has properties that are interchangeable. For example, if you choose to modulate the frequency of box 7, that connection will have a meaningful effect if you swap out the block for any other type.

Having envelopes fixed to level on each block is great for playability, but you’re not limited only to that configuration. There are five independent modulation sources, with three LFOs and two Curves that you can assign with the matrix. But you can also assign any envelope from any of the main building blocks to another mod destination. In many of the patches I made I added blocks that were purely there as envelope sources.There’s a lot more to Algoritm, such as a randomiser, effects section, key scaling and performance offsets, and we’ll no doubt return to it with some tricks and tips in the future, especially now that Reason+ means many more users will have access to the full suite of add‑on devices.