Reason is more than capable of traditional multitrack recording. So here we consider how you might run a full tracking project.

As Reason is not my only DAW I tend to think of it as a virtual studio for creating music in the box. However, Reason is more than capable of traditional multitrack recording. Back in SOS March 2017 issue we explored ways to record a guitar in Reason. This time, let’s take this much further and consider how you might run a full tracking project.

Look At Us, We Formed A Band

For our example project, I’m going to record a band. The project features a drum kit recorded with five mics. There’s a bass guitar, electric and acoustic guitars, a piano, and a single lead vocal line. Finally there’s a drum machine playing a loop.

I’m using my Thunderbolt‑connected audio interface with 32 channels of I/O and no external mixer. We’ll be able to record all tracks at once, or overdub in stages. We’ll set up discrete cue mixes to feed the two headphone outputs on my interface, independent of the main master mix output. 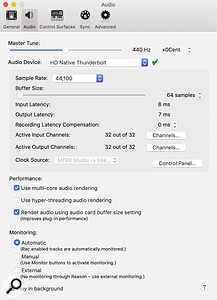 Screen 1. Activate your channels and monitoring mode in the Audio Preferences. If monitoring through Reason, set that buffer as low as possible.To get started check your Audio settings in Preferences (Screen 1). Select your multichannel audio interface, and make sure that you activate all the channels you need (Screen 2). By default channels beyond 1 and 2 will probably be inactive. In my case I’m connecting mics and instruments directly to my interface and monitoring through Reason. Therefore, setting a very low buffer size is essential to avoid distracting signal delays to the musicians’ headphones. A low buffer should be achievable if you’re starting with a sparse project without virtual instruments.

Next choose a Monitoring mode at the bottom of the Audio panel. In my case I’m using Automatic. This means that audio from mics and instruments will automatically pass through to the outputs on tracks that are record‑armed, while Reason is stopped or actively recording. During playback, all audio tracks (including armed tracks) will play back what’s already been recorded.

If your talent is monitoring their instruments directly, either through a mixer or using a Direct Monitor option on your audio interface, choose one of the other options in the Audio settings. ‘External’ will assume you only want to hear what’s recorded on tracks, and will not pass through sound from the inputs. During recording, armed tracks will be muted so you only hear the take you’re playing live. The ‘Manual’ mode is much the same, but gives you the option to override input monitoring mode on a track‑by‑track basis. 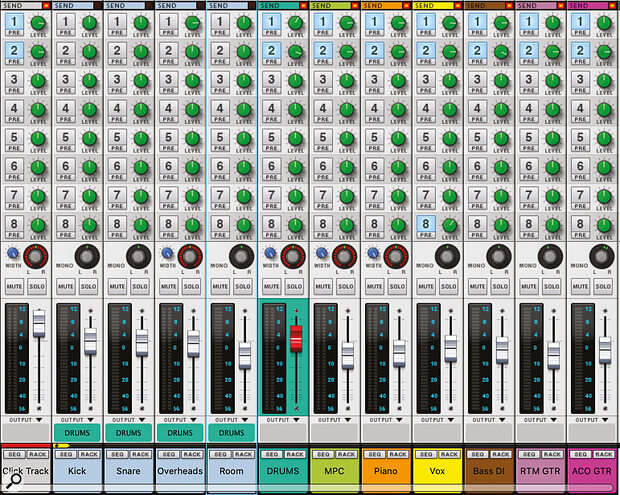 Screen 2. In the Mixer I’ve submixed the drum mics and used Sends to create cue mixes.

I’ve created Audio Tracks (Command/Ctrl‑T) for each of my sources. A little preparation at this point makes both the session and the subsequent mix easier to manage. Colour‑coding helps you see where you are at a glance, and naming the tracks will make sure the recorded audio clips have relevant names too.

For the drum tracks I’ve created a submix group. This routes all the drum tracks to a group master fader which is coloured red. The quickest way to do this is to select the tracks in the mixer, then in the output selector choose ‘New Output Bus’. The group fader lets you control the level (and EQ and Dynamics) of the drum kit from one place, and will make it easier to set up headphone mixes.

The next step is to assign inputs. On the first track’s header in the Sequencer, click where it says IN to bring up the pop‑up input selector. Set whether this is a mono or stereo input, then select the input channel(s) from your interface. Arm the track and if your source is live you should start to see some activity on the meter in Reason.

Tracks are armed by clicking the red, circular arm button on their header in the Sequencer. Make sure you get the Record Enable button, not the Record Automation button which is next to it. To arm multiple tracks at once, you need to click each of them in turn, there’s no shortcut or grouping for this. By default, Reason also arms the most recently selected track in the Sequencer. You might want to turn this off when multitrack recording, by clicking the Manual Rec button at the top‑left of the tracks list.

Set your levels at the source and the mic gain controls on your audio interface. Reason’s mixer has an Input section at the top of the strips with a Gain control like a traditional console. This is a digital trim though and is best ignored when recording. There is a phase invert button though which could be very handy when miking drums.

I aim to have the inputs peaking around where the meter turns yellow on the Sequencer meters. This is plenty of level on a decent interface at 24 bits. Note that the level shown on the Mixer will be different to what you see on the Sequencer tracks. The mixer is showing the output level, which will be affected by the channel fader, EQ, Dynamics and Inserts. Reason records clean signals coming in directly; anything on the Mixer channel is only affecting the return monitor path.

At this point, the easiest thing to do is to feed the main output of Reason to your musicians and get recording. They will hear Reason’s built‑in click if it’s turned on. However, if band members want to hear their own monitoring balance you’ll need to do a little more preparation.

Unlike many DAWs, Reason’s mixer mimics traditional console architecture with fixed Aux mix buses. In other words, in the Sends section, all the Send 1 pots on each strip feed the same output. These are most commonly used for creating Send/Return FX loops to reverb and delay units, but can also be used for headphone mixes. 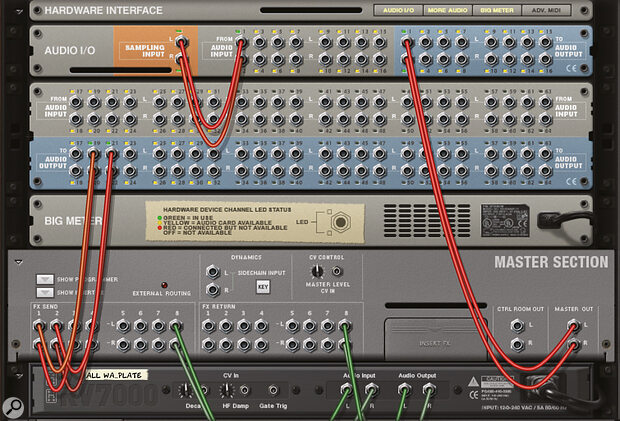 Screen 3. The headphone mixes are routed to separate outputs on my audio interface.

In my example project, I’ve set up two independent cue mixes to feed the two headphone outputs on my audio interface (Screen 3). First I’ve switched on the Send outputs I need in the mixer. Because I’ve got the drums grouped I only need to enable the drum master. On the back of the Rack you can see how I’ve routed these buses to the headphones. On my interface the two headphone outputs are fed by channels 19‑20, and 21‑21. I’ve patched the FX Send outputs from the back of the console Master section to these outputs on Reason’s virtual Hardware Interface.

You can either set the headphone mixes from scratch or relative to the main fader mix. I’ve done the latter, by leaving the Sends in post‑fader mode. Click the Pre buttons to adjust headphone mixes independently of the faders. Slightly annoyingly, Reason’s Send pots default to the centre position which is about ‑12dB, and there’s no shortcut to zero them. To get them to zero you’ll need to adjust them while holding the fine‑adjustment modifier (Shift). This is a good reason for creating templates!

The mixer’s master section has a FX Send panel which gives you a master level trim for each of your headphone mixes. You can also name them here for convenience. As well as my two headphone mixes I’ve used Send 8 to add a reverb for the singer.

Recording in Reason can be initiated immediately from the play position marker by clicking the Record button in the transport or the asterisk button on your keypad. You can also start playback first then punch in from either of these controls. If you enable Pre in the transport, you’ll get a count‑in with the click for the preset number of bars. There’s no way to initiate a live pre‑roll with an automatic punch‑in point, which is a pain when you’re on your own.

When you punch in on an existing take, it will appear to overwrite the new section directly into the clip. Don’t worry, all takes remain accessible. In fact Reason has several options for managing takes and overdubs, but that will have to wait until next time...

Reason’s built‑in metronome click is added to the main audio outputs after the mixer and has its own level control. This is a problem if you are setting up headphone mixes via Aux buses as there’s no way to add the click to other outputs (answers on a postcard please if you know different). Instead you’ll need to make your own click track. I do this with a Redrum device, sequencing a stick sound with hard and soft gates (different time signatures will require different pattern lengths). This track can then be fed to your headphone outputs at the desired level.