To use Auto Sampler to capture a hardware instrument, you must first tell it which MIDI port and channel your instrument is listening to.

Here's how to make the most of Logic’s Auto Sampler.

Logic’s Auto Sampler utilises the technology Apple acquired from Redmatica, a small company that produced some amazingly sophisticated tools for automatically creating and looping samples. Not all of the original Redmatica’s features have made it into Auto Sampler though; one memorable feature not included is the ability to hook up an external synth, then have Auto Sampler step through automatically to the next patch once a sample set has been created. Using that feature you could set the whole thing running to sample, for example, all 1000 patches from your old Oberheim Matrix 1000, then go to bed while the software does all the work.

As useful as that feature could be, in general you get the best results by setting suitable parameters for each of the sound types you plan to sample, so maybe the loss of this auto patch‑change mode isn’t such a big deal after all.

The good news is that the main features behind the automatic creation of sample sets are presented in a very intuitive fashion and work extremely well, with minimal effort on behalf of the user. New sampler instruments are stored in the EXS format within a separate Auto Sampler folder, which automatically appears in the menu of available EXS‑24 format samples when you open Logic’s main Sampler. Of course, you can reorganise them as you choose at a later time.

One of my main uses for Auto Sampler is to convert soft‑synth sounds that I use on a regular basis to Sampler instruments, so that I can include them in song files that I might want to pass on to a co‑writer who doesn’t have the same set of soft-synths that I do.

One of my main uses for Auto Sampler is to convert soft‑synth sounds that I use on a regular basis to Sampler instruments, so that I can include them in song files that I might want to pass on to a co‑writer who doesn’t have the same set of soft synths that I do. I can also copy these instruments to my old MacBook Pro that I take on holiday with me so that I can use my favourite sounds without having to fill up the MacBook Pro with third‑party instruments and sample libraries. There’s also the bonus that Sampler takes up a lot less CPU than many of the instruments being sampled. Plus, you can use Sampler’s filters and envelopes to modify the sounds — a big bonus if your source sound doesn’t have filters, obvious examples being the Kawai K1 and the Korg Wavestation.

Auto Sampler is presented as a plug‑in, and the way it works is that you can insert it on a channel strip, bus or master outputs and it will sample everything that comes its way. Auto Sampler sends out MIDI notes to trigger the sound source, which may be an external synth connected via Logic’s External MIDI Track facility, a software instrument, or a track stack combining several software instruments. If using the External MIDI Instrument option, you just need to enter the interface inputs to which your synth is connected and the MIDI port and channel required to trigger it (shown above).

Any effects that are inserted between an instrument and Auto Sampler are recorded as part of the sample, whereas any that come after Auto Sampler are not. The only part the user really has to take care over is ensuring that the signal levels are optimised before sampling, which means getting them as high as you can without any of the loud notes causing clipping. Auto Sampler has a large input meter running across the bottom and there’s also a horizontal gain slider for adjusting the input level. 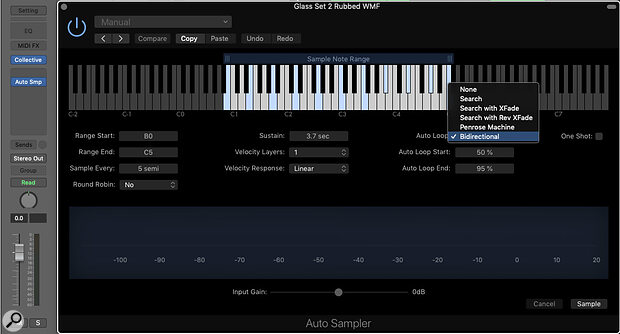 Auto Sampler has a number of automatic looping modes, some of which will work better than others on certain types of sound.

At the top of Auto Sampler’s window is a keyboard display where the note range to be sampled is clearly visible, with the specific notes due to be sampled shown in blue. Notes outside that range are greyed out. Click on the keyboard and a MIDI note is sent so you can hear the instrument you plan to sample. You need to set low and high note limits in the Range Start and Range End boxes, then decide at what intervals you want a sample to be taken. If you are sampling a high‑quality piano, you may want to sample every note, which will take up a lot of memory and disk space, especially if you also need multiple velocity layers. Simpler sounds may sound fine if sampled only two or three times per octave.

For analogue synth sounds, you may be able to dispense with velocity layering altogether, as you can add velocity‑controlled parameters, such as filter cutoff frequency, in Logic’s Sampler, after which you can resave the instrument and your velocity modulations will be stored as part of it.

If you have an instrument that fires out round‑robin samples (ie. different versions of the same sound for successive triggers; a technique that adds realism by avoiding, say, ‘machine gun’ snare hits), you can set the Round Robin value in Auto Sampler to force it to sample the same note several times. Sampler will then play them back in sequence to avoid consecutive notes sounding exactly the same. If you feel creative, you can also create your own track stacks, combining multiple instruments set to respond slightly differently each time you play them by, for example, introducing some non‑sync’ed LFO pitch or filter cutoff elements.

Moving to the next column, here’s where you set the sustain time for the sampling process. If you want to capture a piano note with a long natural sustain without the need to loop it, the 10‑second default might be appropriate. For drum sounds it could be as low as one second or even less. Next you can decide on how many velocity layers you want to sample; if set to more than one, you’ll see a display with the velocity thresholds displayed as horizontal lines that you can drag to whatever values you like between 0 and 127. You can also adjust the velocity response so that suitable handover levels are created for you automatically, which by default is linear, but if you’d prefer a logarithmic curve, you have that option too.

The third column deals with looping, which can be turned on or off. If turned off, the One Shot option becomes available, and this is well suited to drum sounds or sound effects, as it allows them to play through to completion regardless of how short the MIDI note that triggers them might be. Sampling stops once the input sound has decayed to near‑silence.

If you do need to loop, you can set parameters for where the loop should start and stop, as a percentage of the total sample length. Note that these percentage values just set the boundaries for where Auto Sampler starts to look for suitable loop points, so the loop itself may be much shorter than the region denoted by these boundaries. 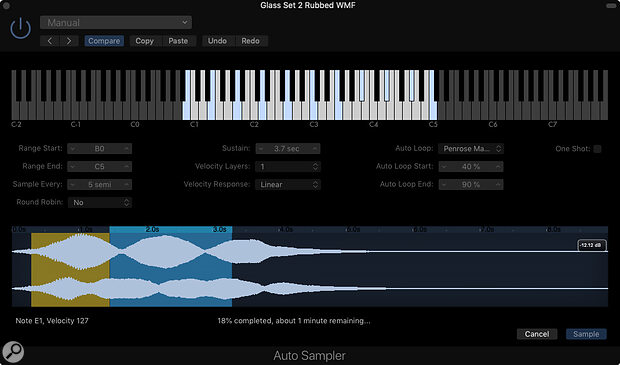 The blue area in the waveform view shows you which part of the sample is being looped.

Alternatively, there’s a choice of automatic loop modes, which require a bit of an explanation. Top of the list is Search, which looks for a smooth loop point that doesn’t require a crossfade. In my experience this often finds a shorter loop closer to the start of the sample than some of the other modes, so although glitch‑free, you may hear cyclic pulsing as the loop plays. Search With X‑Fade is similar, but adds a crossfade to smooth transitions if it can’t find a glitch‑free loop point. Search With Rev X‑Fade also finds the loop points automatically, but adds in a reversed version of the loop on top of the forward version, again crossfading to create a smooth result. Despite these choices, I have to say that to date I’ve used mainly the Penrose Machine and Bidirectional modes, as these suit most sustaining sounds.

Auto Sampler is an absolute gem as it takes all the hard work out of sampling MIDI instruments, whether virtual or hardware, and it is capable of exceptionally good results.

Penrose Machine uses resynthesis to create a very smooth loop that still has the same characteristics as the sound being processed, and is a good option if the other methods produce an obvious looping sound. I have noticed that when using Penrose Machine, the looped section is often created earlier in the sample than for Bidirectional, the last mode, but for most sources the results sound smooth and very musical.

Lastly we have Bidirectional, which plays the loop alternately forwards then backwards, the benefit being that the levels at each ‘join’ always match. A crossfade is used to avoid glitches and though there may still be some audible repetition for some input types once the looped section is reached, it is generally quite minor and less obvious, as the looped section is often longer than for the other conventional loop modes. You can see where the loop is being created as it is marked by a shaded area in Auto Sampler’s waveform view during the sampling process.

That’s pretty much all there is to it, though you can do further editing within Sampler itself. For example, I’ll often extend the ranges of the highest and lowest notes sampled and you can also trim the start point of the sample if need be. I may also adjust the ADSR volume envelope to add a little more natural sustain to the sounds. In my view Auto Sampler is an absolute gem as it takes all the hard work out of sampling MIDI instruments, whether virtual or hardware, and it is capable of exceptionally good results.