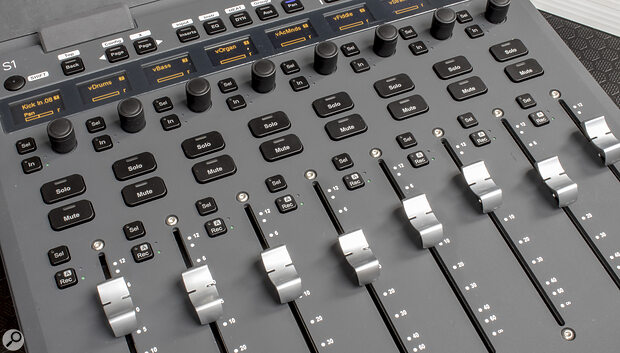 The Avid S1 offers hands‑on control of Pro Tools via its eight faders, eight rotary controls and plethora of buttons.

We explore ways to get the most out of the Avid S1 controller.

In his April 2020 review of the Avid S1, Sam Inglis highlighted its simplicity of use and deep integration with Pro Tools thanks to EuCon, the proprietary connection technology which allows control of Pro Tools and other EuCon‑enabled applications, which can’t be rivalled by generic DAW control protocols like HUI.

In a past life I used to train new users on the old Diginet control surfaces like the D‑Control and D‑Command, and after I’d shown people how to use the control surface I was occasionally frustrated to find people still using the trackball. What it took me longer than it should have to appreciate was that it’s not enough for a control surface to be as good as controlling software using a mouse and keyboard: it has to be better.

It’s never a fair competition between the mouse and keyboard and any alternative means of control, as the one thing which is virtually guaranteed is that pretty much any user of any DAW already knows more about how to use it with keyboard and mouse than they do about controlling it using a control surface. What is needed here are ‘killer applications’; things you can do with an S1 which are so helpful that they are reason enough to engage with the surface on their own. So what are these killer applications?

Most of us are familiar with the advantages of a physical fader over an on‑screen alternative. Being able to control multiple faders at the same time is a huge advantage, as is being able to feel the faders under your fingers. Many people working today started out with software faders before moving on to hardware, which certainly wasn’t the case years ago when the first generation of hardware controllers were released. Multi‑touch is of course available via touchscreen tablets, and many of the apps for them are available for free, such as the Avid Control app, but anyone who has used such devices for mixing will know how easy it is to ‘fall off’ the fader. Physical faders are hard to compete with for tactile feel, and the faders on the S1 are great quality, high resolution, touch sensitive and, most importantly, quiet (does anyone else remember the Yamaha 03D faders?).

Closely related to faders are physical encoders, with multiple encoders again meaning that you can control more than one parameter at a time. Depending on exactly what is being controlled this is anywhere from a pleasing improvement to a complete game‑changer. An obvious example might be 1176 plug‑ins, which make much more sense when you can raise the input at the same time as lowering the output. The same could be said of the Pultec EQ trick, where a simultaneous boost and attenuation of the low frequencies results in a pleasing bottom‑end lift. In both cases, there is a sweet spot for the controls which is best found by tweaking both controls at once.

Possibly a better example is the venerable but still awesome SansAmp PSA‑1. In spite, or perhaps because, of its cryptically named parameters this is a great tool, particularly on bass and drums, though it’s surprisingly good on electric guitars even after all this time. Dialling in a sound is utterly transformed when you use two hands. If only you could do so while playing the guitar…

Important thought they are, both of these aspects of the S1 are common to all control surfaces. As such they can’t be thought of as compelling reasons to get an S1 as opposed to a different surface. What is it about the S1?

The biggest change of thinking that a mixer used to analogue consoles has to make is the idea that you need a lot of faders. You really don’t, because rather than going to the fader you need, with a control surface you bring the fader you need to you. While you can nudge and bank up and down with an S1, if you’re doing that a lot you’re probably not working efficiently. Using the D‑Control, VCA Spill was the standout feature for me: the feature which caught my attention and made me invest the time in learning the surface. In 2021 we have VCA Spill and Folder Track Spill, which are similar but different.

A VCA is a master fader for a Mix Group — useful, but many music mixers get by without them. Where they really come into their own is as a way to access and ‘spill’ the member tracks of that group on to a dedicated layer on the surface. By using this it is straightforward to use a handful of VCA tracks to control the spill status of many member tracks on and off the faders. Need drums? Double‑tap the VCA’s Track Select button on the S1. The member tracks spill out across the surface. When you’re done, double tap the select button on the VCA again (which has been moved to fader 8 while spilled), and you’re back at the top level of your mix.

Folder Tracks offer the same functionality, the difference being that Folder Tracks also toggle their open/closed status in Pro Tools. If you want to toggle a Folder you can do it using the default user key assignment on User 4 at the bottom right of the surface. Controlling large sessions on a single S1 is easy.

A related but more customisable way to bring specific groups of tracks on to the surface is using Layouts. Layouts are similar to Custom Fader Layers on a D‑Command/Control, in that you can assign an arbitrary set of tracks onto the surface and recall them from the surface using the illuminated track colour buttons. To set up a custom Layout go into the EuCon app and, in the Assign tab, select the tracks you wish to assign to each layout slot. Something which is just as important as how to access a feature of a control surface is how to get back out again, and in this case a lot of people set up Layout 1 as ‘All’, with all the faders set to <auto assigned> meaning the S1 will behave normally. 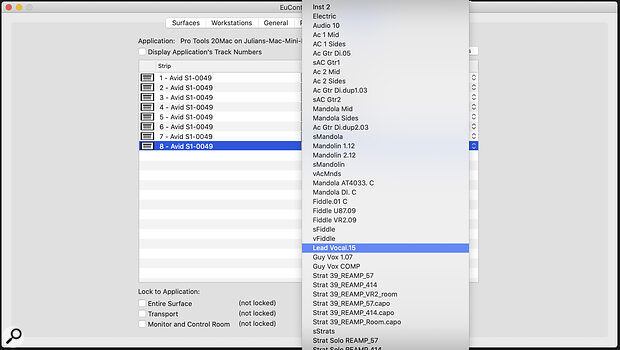 Creating a layout in the EuControl software.

From there, set up your other Layouts with whichever combination of tracks you want. Something some people seem to pass over is the fact that as well as setting layouts with any unassigned strips set to <blank strip>, you can also leave them to <auto assigned>, meaning that they continue to behave like the standard S1. This is useful for pinning a particular track to fader 8, for example, and keeping it to hand while continuing to work on the other faders. To access the first eight Layouts from the S1, hold Surface Shift and press one of the eight Track Colour keys along the bottom of the S1.

The last killer application has to be Automation. While in a lot of cases drawing in automation is very effective (automating switched parameters like plug‑in bypasses is a good example), there are just as many cases where it isn’t ideal. Real‑time automation passes are the only way to go with fader rides and the like, and of course EuCon offers far greater resolution than MIDI‑based protocols, but to really get the best out of your automation pass having ready access to the Back and Play command is a lifesaver. When you miss a move or act too late, instead of editing with drawing tools just tap Back and Play and try again. This isn’t set up by default, but the way to access it without a control surface (or the Avid Control app) is by Control‑clicking (Start‑click on PC) on the Rewind button on screen — which is far from convenient if you’re in the middle of an automation pass.

Assigning the Back and Play commands to a softkey can really help speed up your automation.

To set up Back and Play on one of the User Keys go into the EuCon Soft keys tab and replace one of the default assignments. Don’t be tempted to change User 3 (the Start/Stop key by default), as this is the most important setting of all for the new user. Unless you have an Avid Dock with its dedicated transport controls you’ll need this as, if you have to keep going back to your familiar comfort zone of the keyboard you’ll probably stay there for more of the time and end up doing in software what you could be doing on the S1. With a little practice an S1 becomes a very comfortable place to do much of your work, but if you don’t work through the learning curve you’ll never migrate fully.

Of course the S1 is just part of a modular system which can be built up over time. Pairing with the Avid Control app is a no‑brainer and extends flexibility considerably. Pair with an Avid Dock and things start to get much more sophisticated, and if you feel cramped you can extend to up to four S1s. This modular approach means you can access an extremely capable EuCon Control Surface without having to invest all in one go. Once you’re in the EuCon universe you’ll also get access to custom EuCon commands and Macros, but that subject will have to wait for another day.