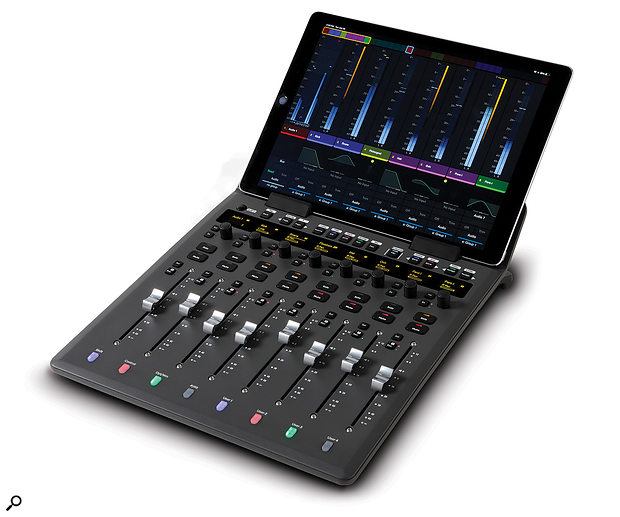 Avid's S1 is a product that can be viewed through many lenses. It's an update on and replacement for the older Artist Mix. It's an affordable distillation of the high-end S6 modular control surface. And it's part of a mature and coherent ecosystem that also includes the free Avid Control app and the existing Pro Tools Dock.

This ecosystem is all based around EUCON, a protocol developed by Euphonix before that company was bought out by Avid in 2010. Whereas older control protocols such as MCU and HUI are MIDI-based, EUCON data is transmitted over Ethernet. This offers much higher bandwidth, allowing EUCON to support finer fader resolution and richer controller data, so not only are EUCON controllers faster and more responsive, they are also able to control many more DAW and plug-in features.

Avid want to see as many host DAWs as possible implement support for the protocol, but they won't let anyone else make EUCON controllers. Consequently, if you want an affordable eight-fader EUCON control surface, the S1 is now the only game in town. Along with the rest of the EUCON ecosystem, it's naturally supported in Pro Tools, while other 'qualified' DAWs include Apple's Logic and Steinberg's Nuendo and Cubase.

Before describing the specific features of the S1, a brief overview of the EUCON system is in order. At the top of the EUCON tree are the S6 and S4, professional-level 'console replacement' surfaces assembled to user requirements from a number of different modular panels. These include the Automation Module, with transport controls, jog/shuttle wheel, 'focus fader', assignable buttons and more; the Knob Module, which provides eight columns of four rotary encoders, each with associated buttons and OLED displays; and the Process Module, which combines one row of encoders and displays with numerous buttons that assign different functions to Process and Knob Module encoders.

The S6 palette also includes two screen-based modules. At the heart of things is the Master Touch Module, which combines a multi-point colour touch-screen with assignable encoders, knobs and buttons, and can take control of almost any function within a EUCON-enabled host program. The other S6 screen-based module is the Display Module, a highly configurable colour screen designed primarily as a meterbridge; most S6 configurations would use a Display Module for each bank of eight channels alongside a Fader Module, a Process Module and one or more Knob Modules.

Some S6 modules, such as the Joystick Module for surround panning, are unique to that surface. However, much of the remaining S6 functionality is available in other, more affordable ways. In fact, a surprising amount of EUCON control can be had for free, courtesy of the Avid Control app for iOS and Android. This allows multiple tablets or phones to be wirelessly connected to a single host DAW system. One of these connected devices is designated the Master, and offers much of the functionality of the S6 Master Touch Module.

A tablet running Avid Control in Master mode is a pretty powerful controller in its own right, while the Pro Tools Dock is a hardware unit that complements this functionality. Together, a Pro Tools Dock and Avid Control give you something closely resembling the Automation and Master Touch Modules at the core of the S6. Any additional tablets operate in Meter mode, providing quite a bit of the functionality available on the S6 Display Module.

The S1 itself can be thought of as a streamlined combination of an S6 Fader and Process Module. It provides eight long-throw, touch-sensitive motorised faders, each with solo, mute, select and record/automation arming buttons, plus eight rotary controllers with their own OLED displays, select and 'In' buttons. Above this is a bank of buttons that replicate the Process Module's ability to switch the other controls to adjust different parameters, while at the base of the unit are eight buttons with user-assignable functions. At the very top is a raked stand designed to accommodate a tablet running Avid Control.

To compare what's possible using EUCON with what's achievable over HUI or MCU is like comparing an ocean with a lake.

Only one Pro Tools Dock can be connected to a given DAW system, but up to four S1s can be used in multiples, and a neat magnetic fastener locks them securely side-by-side in a very satisfying fashion (I'm easily pleased). You'll want a tablet to pair with each controller, but this needn't be expensive: the Avid Control app runs perfectly well on older iPads (as long as they support iOS 12 or later) and cheap Android tablets.

Whereas Avid Control can communicate over Wi-Fi, the S1 requires a wired Ethernet link, as well as a mains power connection for its laptop-style 'line lump' PSU. A USB Type-A socket is provided solely for powering an attached tablet. The only other connection is a quarter-inch jack socket for a generic footswitch, which is not supplied. The S1 itself is surprisingly large and made from sturdy plastic; though not built to the same bulletproof standards as the S6, it certainly feels more solid than the old Artist Mix. The touch-sensitive faders are smooth and precise, the rotaries are responsive and accurate, and there's plenty of visual feedback available courtesy of the OLEDs and in-button LEDs. 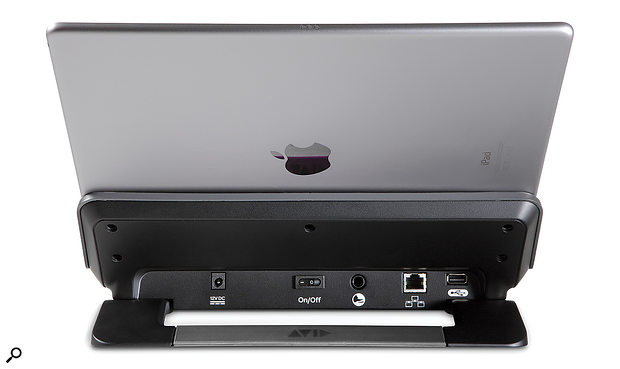 The S1's rear panel includes an external power supply socket, an on/off switch, a footswitch port stylishly indicated with a Cuban-heeled boot, an Ethernet port and a USB port.

An intermediary application called EuControl is permanently active in the background on your DAW machine, and offers numerous configuration options and preferences. For example, you can set the function of the user-defined buttons below the S1 faders, choose different solo logics, decide whether a footswitch should be used for transport or talkback, specify what actions should 'attention' a track, and how closely you want actions made using a mouse and keyboard to be reflected on the S1.

EuControl is also where you set up and select Layouts. A Layout specifies a set of faders that are always available and unaffected by banking on the control surface: as a simple example, you might decide that you want the first S1 fader to be permanently locked to the lead vocal or to your session's Master Fader, regardless of what the others do. Alternatively, you could set up a Layout that brings together all of your VCA Masters, making it possible to rebalance a complex mix very quickly. Layouts can be recalled from soft keys or from the Avid Control app, and are stored as part of the DAW session.

EuControl is straightforward to use, but I did run into a couple of situations where it simply refused to acknowledge the S1. One of these took several hours to resolve, and it eventually turned out that I needed to download and install an update to EuControl. The only hint I'd received that something was wrong was that its icon in the Taskbar had turned light grey.