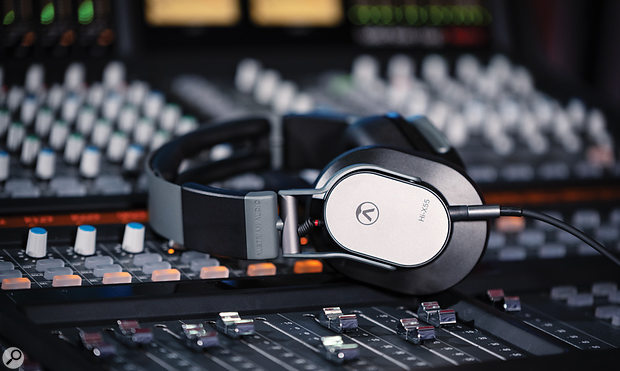 Following on from their outstanding debut microphones, Austrian Audio turn their attention to the headphone market.

When parent company Harman closed AKG's development and manufacturing facilities in Vienna, Austrian Audio rose phoenix-like from the ashes. Their first products were the OC818 and OC18, microphones that drew on AKG's heritage while incorporating 21st-Century innovation. Austrian Audio have followed up by revisiting another key area of AKG expertise: headphone design.

Like the OC microphones, the Hi X headphones are manufactured entirely in Austria, and employ further developments of technology originally used by AKG. In this case, advances have centred on a new magnet design said to yield "the strongest magnetic field in its class". This is coupled with an unusually lightweight membrane and voice coil, which have less inertia and hence better transient response.

Two models are available at launch. Both use the same driver in a closed-back earcup, but the Hi X50 are 'on-ear' headphones, while the Hi X55, under review here, are 'over-ear' phones: the earpad fully surrounds the ear and sits flush against the skull.

The Hi X55s are supplied in a smart cardboard case with a single, detachable, distinctly non-curly 3m cable. This attaches to the left earcup using a locking 3.5mm connector. At 305g without the cable, the headphones are lightweight but solidly built, with the important parts of the frame made from steel. They don't fold, but the earcups can be rotated forwards by 90 degrees, allowing them to be packed fairly flat. However, the only protection on offer for use on the road is a soft carry bag.

The earcups themselves are quite long and narrow, and offer a good but not exceptional level of isolation from external sound. I found them fairly comfortable apart from a slight tendency to exert pressure at the base of the ear.

Hi X is short for 'high excursion', the idea presumably being that a lightweight diaphragm and voice coil driven by a powerful magnet moves further and generates a higher sound pressure level for a given input. Their impedance is quoted as 25Ω and their sensitivity at 118dB SPL for 1 Volt, which translates as about 102dB SPL/mW. In practical terms, this means the Hi X55s can be driven loud from any source.

High frequencies are represented quite strongly, but not in a way that makes them sound peaky or unnatural.

Many closed-back headphones have a 'smile curve' response where a presence peak in the upper mids is combined with a similar emphasis on the low end. It's certainly a character trait I associate with many AKG models, and it's one that is apparent on the Hi Xs also. Done wrong, this sort of sound character presents a ragged treble full of narrow resonances and a low mid-range that is bloated in the attempt to obscure a lack of genuine bass. The Hi X55s are a pretty good example of how to do it right!

High frequencies are represented quite strongly, but not in a way that makes them sound peaky or unnatural. In combination with a low level of distortion, this makes the Hi X55s a useful and revealing analytical tool, and once you get used to how they sound, decisions on problems such as sibilance and noise are reliable and easy to make. At the other end of the spectrum, the bass is clean and slightly forward, an impression which is reinforced by a relatively restrained low mid-range. If what you want is the ultimate neutral mixing tool straight out of the box, you'll still be better served by buying a really good pair of open-backed headphones, but for all-round studio purposes and use on the road, the Hi X55s tick plenty of boxes. And once Sonarworks have developed a profile for them, they will be a good neutral mixing tool too!

The same classy pedigree and thoughtful design that went into Austrian Audio's OC mics is apparent in their first headphones too.