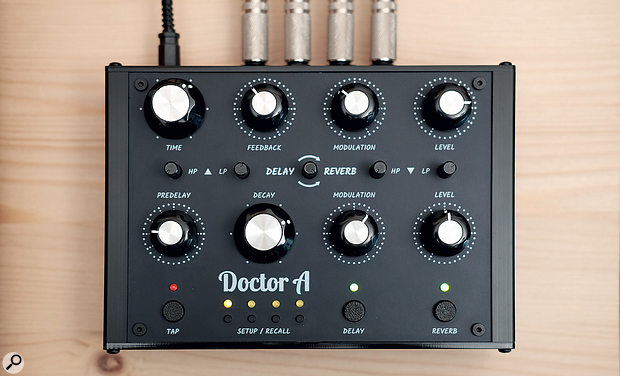 If you're seeking a performance-friendly effects processor with a top-notch signal path, this might be just what the doctor ordered...

Audiothingies are a small French company who sell directly. Until now, they've mostly offered small and affordable, but surprisingly capable, sound-generating boxes, such as their Micromonsta wavetable synth, so their new Doctor A marks an interesting change of direction. This delay and reverb combo's price puts it in 'boutique' territory, and Audiothingies justifiably boast of the high-quality WIMA and Nichicon UES-series capacitors used in the signal path. Notably, though, the Doctor A isn't aimed at quite the same users as the offerings from, say, Strymon or Eventide. It's not a guitar pedal; there are no stomp-style switches to operate with your foot. And the stereo Ins and Outs, +19dBu audio headroom, control voltage connections and distinctly Moog-ish knobs, suggest it may have most to offer to synth players, or those wanting a compact, portable alternative to a 19-inch rack unit for a mixer's aux loop.

Physically, it's nice and compact (17.4 x 12.3 x 6 cm) and the metal-ended composite-body construction keeps it light (less than 600g) but tough. Power is via a supplied 9V DC adapter, with a centre positive plug (rather than the more common centre negative). Buyers can choose between a gold-plated PCB material front panel or (for a €36 premium) an aluminium panel version. I tested the cheaper of the two, and whilst the PCB material does potentially mark more easily it looks like that'll pose no problem in the longer term.

A stereo digital delay and multi-algorithm reverb run in parallel alongside an analogue dry signal path. Both effects have their own low- and high-pass filter pair, and there's a send knob to get the delay's echoes into the reverb.

The delay has four modes: a crunchy and unusual eight-bit Lo-Fi (with no attempt to dither away quantisation errors), the cleaner-sounding Classic and Spacey ('tape-vibe') 12-bit varieties, and a ping-pong with variable left-right time ratio. Delay time goes to a maximum of 1000ms and can be set by knob, tap or MIDI clock.

The reverb section, described as 'vintage style', has eight modes, which range from ambience-like rooms and an intriguing 'Bouncy' to lush plates and halls. Pre-delay up to 100ms can be dialled in and behaves differently for each mode, sometimes seeming to smear reverb onset or stretch early reflection patterns, rather than just delaying the whole effect. The maximum decay time varies with the mode too, from just a couple of seconds for the small rooms to well beyond a minute for the two plates, and more than two minutes for the spacious Concert Hall. There's no mention of the sampling resolution, but it all sounds very clear and clean.

Modulation depth is variable separately for the delay and reverb and is, of course, the key to tape-style wobbles, chorus, flanging, glistening reverb tails, or more chaotic-sounding effects. Delay modulation also introduces a subtle but pleasant stereo width, with echoes appearing randomly off-centre. The rate of delay modulation can be varied, via a hidden button/knob combo, between about 0.5 and 5 Hz.

The filters I mentioned are subtle but effective, behaving more like gentle-slope hi-fi tone controls. Great for removing low-end murk or de-sparkling the tops, but telephone/megaphone and other overt 'character' effects are outside their repertoire.

Looking at the front panel, the main knobs are firmly mounted and positively invite real-time tweaking. However, Doctor A also has a memory/preset system which manages to offer 64 memory locations (eight memories in eight banks) from its tiny complement of front-panel buttons. Seven banks store the setting of every parameter, except Delay and Reverb bypass status. The other one is WYSIWYG, in that it recalls the delay and reverb algorithms only, and loads the 'live' front-panel knob positions.

Two rear-panel 1/8-inch CV sockets will safely handle up to ±12V signals, but work optimally with a typical 0-5 V Eurorack voltage range. Each CV input can be assigned control of any 'large knob' parameter, and then it's strictly positive voltages that are in play, which add to the knob's static value/position. The Doctor A ignores negative voltages, such as from a bipolar LFO. 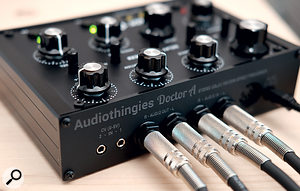 The rear panel sports dual CV inputs as well as a MIDI DIN input.If MIDI is more your thing, all parameters can be controlled via predefined CC numbers, on MIDI channel 16. Clock is received too, and causes the delay section's time knob to step through six levels of beat subdivision, down from one echo per beat (for 60bpm and above), through musically useful dotted, triplet, 2x and 4x speed combinations.

Finally, an examination of the Doctor A's backside (ahem) reveals an appropriately medical-sounding 'Inner Guts Access' recess that houses six header-pin jumpers. Repositioning those (a job you wouldn't want to do too often) lets you activate a 12dB input boost, a 12dB output cut, and to disable the dry signal completely: a so-called 'kill dry'. You'd use that when patching a Doctor A into an aux send/return loop, as there are no onboard wet/dry mix controls. Kill Dry also complements a clever dual-mono input option, which feeds the delay from one input socket and the reverb from the other. This makes the Doctor A behave almost like two mono-in/stereo-out effects units which you can then drive separately from two mono aux sends on your mixer.

All the facilities in the world don't count for much unless an effects unit can deliver sonically, though, so how does the Doctor A get on? In short, it's got quality, character and individuality in abundance, as well as impeccable low-noise, high-headroom credentials.

The reverbs are varied in style, but all pull off that trick of seamlessly connecting with and growing out of the input signal as if they were part of the original sound. To put it another way, there's no hint of the 'stuck on' character that can plague cheap units. Reverb tail complexity is right up there with the very best algorithmic types, even with no modulation applied. Special mention must go to the versatile Medium A algorithm, ravishing Plates, and the inspiringly weird Bouncy. This mode co-opts the Modulation knob to simultaneously lengthen max reverb time and vary character between spring-gone-wrong and a sort of rhythmically pulsing plate. The two Halls are also nicely complimentary: one's tail dissolves to a kind of cool, stony haze while the other's remains warm and coherent.

The 'playable' aspects of the Doctor A don't disappoint... with utterly silent enabling/disabling of the separate effect sections, and Time and Decay knobs capable of taking already wet-sounding signals and stretching or squeezing them to bits.

The Doctor A's Lo-Fi delay is deliberately noisy and fuzzy as I mentioned before, and Spacey is even more remarkable, with echoes that disintegrate in a complex way, akin to a tape delay. With the feedback knob at two o'clock or above, a chaos ensues that is simultaneously wonderful and slightly unnerving. Left unchecked it could, I think, engulf your studio! The more straight-laced delays are merely genuinely useful, with hints of 12-bit quantisation perhaps just audible as little wisps into the noise floor.

The 'playable' aspects of the Doctor A don't disappoint either, with utterly silent enabling/disabling of the separate effect sections, and Time and Decay knobs capable of taking already wet-sounding signals and stretching or squeezing them to bits when wiggled. Adding in CV control of the same is frankly mind-blowing, and outside of the world of Eurorack modules much rarer (or harder to achieve) than you might think. Treating the audio output of a synth with Doctor A while applying typical LFO-rate, audio-rate, or rhythmically triggered envelope modulation to its parameters is to essentially make it a part of your synth architecture. The explorations I made, with the Moog Grandmother and Behringer Neutron, were equally surprising and delightful, and opened up styles of effect treatments I'd never hitherto experienced.

Are there any downsides? Well, there's no reverb hold or freeze function, which some users might see as an oversight in an otherwise distinctly 'creative' box. Nor is there any expression pedal input, though that's mitigated to a great extent by the CV connectivity. Some users may miss reverse algorithms, non-linear swell/gate dynamic contours, trendy octave-stacking shimmers and really strong multi-faceted treatments that include distortion, say. For hardcore shoegazers it could merely be the inability to generate 100-percent wet treatments in a normal insert configuration that'll be disappointing. And as for the onboard configuration and memory save/recall system, we can be thankful it's there, and quite capable, but some of the button combinations and sequences are fiddly, it must be said. I got the hang of them, but you'll almost certainly need to keep the manual nearby as there's no printed info on the unit to give any kind of prompt.

However, the Doctor A gets so much right, is so immediate, and sounds so fundamentally good I'm more than happy to forgive her/him a few non-critical shortcomings. Also, as is the case with synthesizers, there's never been and never will be one effects unit that offers all things to all people, and covers all sonic territory. In the Alternatives box I've mentioned some of the obvious competition, but in fact the Doctor A is neither better nor worse than any of those: it's a distinct sum of its parts, particularly considering the attractive mixture of parallel multi-algorithm delay and reverb processing, tactile knobs, CV and MIDI control, flexible audio routing and onboard memories. It's a left-field option, perhaps, but for many synth players especially it could be irresistible.

You have to go big-league to match Doctor A's effects quality, especially for reverb, but while the likes of the Strymon BigSky, Source Audio Ventris and Eventide Space all offer more reverb algorithms, none has a dedicated delay section. And of the few genuine dual-delay/reverb boxes out there, none quite match Doctor A feature for feature. GFI Systems' Specular Tempus is versatile, stereo and extensively programmable, but it has fewer knobs and no dedicated CV control. The same could be said for the capable Collider by Source Audio. Earthquaker Devices' Avalanche Run V2 and Fender's Reflecting Pool are stereo and tweakable, but are simpler again, with no memory recall.

A distinctly synth-friendly delay and reverb pairing that strikes a fine balance between character and day-to-day usability. The reverbs, in particular, are easily on a par with the best of the boutique pedal competition.