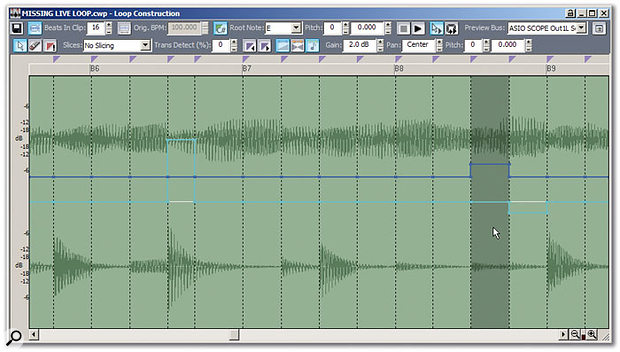 The Loop Construction window. Click within a slice to audition it. You'll also see editable fields containing the slice's gain, pan, and pitch transpose settings. You can adjust these parameters with envelopes too — the dark blue one shows gain, while the aqua one shows pitch (this example doesn't show the pan envelope).

Not every new feature of Sonar 4 is a headline-grabber — there are many new facilities and tweaks to existing features that you might not initially notice, but which could make a big difference to your workflow.

The 'big' new features in Sonar 4, such as surround support, are very welcome, of course. But they might tend to overshadow some of the other improvements in the new version that pertain to more specialised applications. A great example of this is the update of the Loop Construction view in the new version. Admittedly, it may not interest all users, but it certainly represents a major leap forward for anyone into Acid-ised looping.

The Loop Construction window has now acquired some properties more typically associated with REX files, such as the ability to audition individual slices of a loop. But there are many other changes as well. One of my favourites is the ability of the 'Now' time to move through the Loop Construction view waveform regardless of whether you're playing the entire sequence using the Transport's 'Play' button, or previewing the loop within the Loop Construction view itself. This makes it easy to see which slice is playing at a certain 'Now' time, which is particularly helpful if you hear a section within a loop that doesn't stretch well: look at the 'Now' time, and you'll see which slice is causing the problem.

But when you've found the problem, how do you fix it? Prior to Sonar 4, you'd move the markers, play the loop, and cross your fingers. Now you can click on the Enable Slice Auto-preview button (keyboard equivalent 'A'), and audition an individual slice simply by clicking within it (as with Recycle). An additional button, Slice Auto-preview Loop (Shift-A), loops the slice when you click it. The preview function makes it easy to hear whether there are clicks at the beginning or end of the loop, or an extra hit within the loop that a slice marker may have missed.

You can also move through slices consecutively, using your computer's Page Up and Page Down buttons (to move to the previous or next slice respectively), or by clicking on the Move to Previous Slice and Move to Next Slice buttons in the Loop Construction view toolbar. If the Slice Auto-preview function is enabled, you'll hear each slice as you move to it.

Sonar 4 adds a processing element as well, thanks to gain, pan and pitch envelopes. These are not envelopes in the sense of having attack and decay; you set their value on a per-slice basis. For example, a slice can be panned in the stereo field, but you can't change the pan position within the slice. (Of course, you can still use track envelopes in the track containing the loop, to add continuously variable changes.)

The gain envelope is useful for applications such as bringing up particular kick or snare hits (but if there's signal where the gain change occurs, you may hear a click). Changing pitch can add really interesting effects to individual slices. I've covered how to create bizarre percussion loops by using extreme amounts of loop transposition; being able to do that to individual slices can make very electronic, 'buzzy' sounds out of even ordinary percussion sounds (such as congas). However, note that if you drag a loop with this kind of processing off to the desktop to save it, the processing-parameter values aren't saved with the file (they are, however, saved with the Project, so when you call up the Project, any processing within the loop remains intact). This means that if you bring the loop back into Sonar, or any other program that reads Acid ised files, you'll hear the raw, looped file without gain, pitch, or pan changes. To save these changes as part of the loop, bounce it to a track (this creates a WAV file), then re-Acid ise the copy.

Sonar 4 has a cool new Mute tool that's designed for loop-recording applications. After you've recorded multiple takes, you can use the Mute tool to silence certain sections, thus making it easy to find which parts of which takes you like. It's equally easy to unmute a section. We'll get into this further in a future instalment of Sonar Notes, but for now it's worth noting that the Mute tool is not limited to multi-lane tracks — something that's not really clear from the help file. In fact, you can use it with any MIDI or audio clip to selectively mute regions. This can be handy for several applications:

The beauty of using the Mute tool, as opposed to cutting or erasing, is that if you change your mind the cut or erase operation may be buried in layers of 'undos'. With the Mute tool, not only does the data remain, but you can see it and it's easy to retrieve. To mute, click on the Mute Tool button (it looks like the international 'No' symbol used on traffic signs) in the Track View toolbar. There are two options for click and drag behaviour, and these are Mute Time Ranges or Mute Entire Clips. For this particular application, choose Mute Time Ranges. Click and drag the cursor along a clip's lower half to mute a region; to unmute, click and drag over the muted region in the clip's upper half. 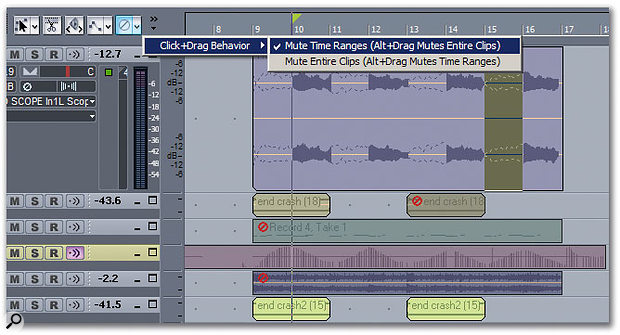 In this example, three clips are muted. The larger top clip was once a sustaining sound, but measures nine, 11, 13 and 15 have been muted with the mute tool.

You can also use this tool to selectively mute particular clips, if you select Mute Entire Clips as the required drag behaviour. In this case, click on a clip to mute and click again to unmute (when dealing with whole clips you don't have to concern yourself with whether you click in the top or bottom half). Muted clips have a small Mute symbol in the upper left corner. The clip and region functions can co-exist, by the way; you can mute some clips, switch over and mute some regions, go back to clips, and so on.

Finally, note that if you mute sections of a clip and bounce it to another track, the bounced track's audio will reflect these level changes.

Here's another little feature (also called 'Audition') that you'll use all the time once you discover it. If you've got particular tracks and/or clips selected, or have selected a particular region in the timeline (by clicking on the start time and dragging to the end time), holding down Shift and pressing the space bar plays back only what's selected. (Note that this doesn't happen if you hold down Shift and press Play on the Transport; you have to use the space bar to initiate playback.) Once playback reaches the end of any selected region, it stops.

In practice, I've found that exploiting this feature cuts right down on using the Solo and Mute buttons. If I want to hear something temporarily, Selection Playback is both faster and more efficient (and I don't forget to 'unsolo' or 'unmute' a track).

Although Sonar has a staff view that's ideal for keyboard players, guitarists who can't read conventional notation needn't feel left out: Sonar can generate tablature from MIDI data. As opposed to notation, tablature shows the fingerings that would be used on a guitar neck. This is useful not only for Sonar-savvy guitar players, but for keyboard players and arrangers who come up with a part intended for a guitarist.

To generate tablature, select a MIDI track, give it the focus, then go to the Staff View (Alt-7). This brings up the notation for the track. You can view the 'virtual guitar neck' by clicking on the Fret View icon, or typing 'V'. 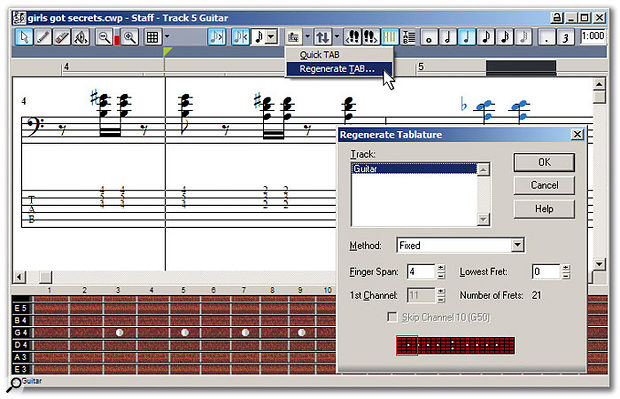 Tablature has nothing to do with tablas, but with presenting notation in a guitarist-friendly format.

Select any notes that have obviously bogus tab settings (draw a marquee around them); if you're in a hurry, you can even just draw a marquee around all the notes in the track. Click on the drop-down menu to the right of the Staff Layout icon and select Regenerate Tab. You have a choice of Fixed or Floating methods for deciding where on the neck the notes will be played. Fixed is usually best, as it lets you define the range of frets into which the notes should fall, using two parameters: Finger Span (the total number of frets your fingers may need to stretch — the default is four), and Lowest Fret. The latter is generally 'zero' if you're playing on the lower part of the neck, but if you want to voice higher on the neck, you could set this to five, nine, 12, or whatever you want the lowest note to be. For example, if you choose a Finger Span of four and a lowest note of five, all notes will fall in the range of the fifth through to the eighth frets. For now, just choose the defaults.

Now click OK and all the notes should end up with fret assignments that can actually be played by a human being. If not, check for doubled notes in the sequence. Sonar will interpret this as playing one note on one string and the same note on a different string.

Top 10 Boring Things That Are Really Important In The Studio
5 days 7 hours ago.