We continue our exploration of Cakewalk's oft–overlooked Sonitus plug-in suite.

In our previous Cakewalk workshop [see SOS July 2019 issue] we covered the Sonitus EQ, Compressor and Delay. In case you missed it, the premise is that the Sonitus plug-ins shouldn't be dismissed just because they were born over two decades ago. They were ahead of their time then — and in many respects they still are. 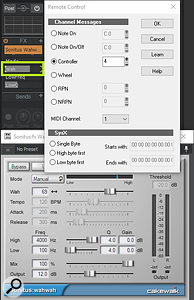 Screen 1: You can set the Sonitus Wahwah plug-in to respond to a hardware controller such as a pedal.If you have amp simulators with wahs, you might think the Wahwah plug-in is redundant — but it's not just a wah! It can also act as an envelope-controlled filter in Triggered mode, or be LFO-controlled in Auto Wah mode. (Note, though, that the LFO doesn't sync to tempo — you need to set the tempo in the plug-in manually.) It has four really useful features that help it stand out. First, you can change the frequency, Q and gain for the toe-down and toe–up positions. This offers significant tonal flexibility. Furthermore, the toe-down and toe–up parameters cover the same range, so in Triggered mode, the wah can sweep up or sweep down. There's a mix control for parallel processing, making the effect viable for bass, funky drums, and other applications without needing a separate effects bus. FinalIy, it's really easy to control the wah frequency with a pedal. Here's how:

1. In the Console view, choose Options / FX / Show Assignable Controls to display four of the Wahwah parameters under the effects rack. You can reassign these, but the default includes the Wah parameter that varies the frequency.

2. Right-click on the Wah parameter in the Assignable Controls section (not on the plug-in itself), and choose Remote Control.

3. Click on the Controller radio button, and assign the controller you'll use to vary the frequency. A MIDI keyboard may already have a jack for a foot pedal, which likely generates CC4 messages. If so, choose controller 4, and click on OK. If not, choose a controller number that corresponds to, for example, a floor multi–effects unit's pedal.

Speaking of wahs, a fun vocal trick is using the trigger wah to sweep a vocal in the 'intelligibility' range (around 3.5 to 4 kHz), with Mix set to mostly dry signal. This adds a certain animation to the vocal that doesn't involve time-delay processes. Finally, I was able to do a spot-on emulation of my vintage, collector's item Vox Clyde McCoy pedal. The pot is never scratchy, and the batteries never need replacing.

Like the Sonitus Compressor, it has a Limit option. So, in addition to using it as a multiband compressor, you can push the Output control and have 'maximiser'-like functionality. It can also serve as a flexible five-band graphic equaliser, if you don't apply any compression within a band, and similarly, it makes a great crossover for multiband processing.

Screen 2: Multiband processing can be achieved by making duplicates of a track and loading Sonitus Multiband on each copy, with different bands soloed on each instance.

Suppose you want to process the highs, mids and lows separately for a track. Start by inserting Sonitus Multiband in the track, and on the plug-in's Common page, set the ratio at 1:1 so there's no compression in any of the bands. Edit Multiband's frequency ranges for the lows, mids and highs in the track by moving the frequency range sliders — to divide the input into just three bands, move the rightmost slider all the way to the right, and the leftmost slider all the way to the left.

Duplicate this track twice. Within the Sonitus Multiband plug-in, solo the low band on one track, the mid band on the second track and the high band on the third track. You can then add separate plug-ins on each of the three tracks to process each band individually. Cakewalk is very good about sample-accurate alignment, so you won't encounter any problems by splitting the signal over three tracks.

For use as a multiband compressor, the Multiband has the same basic control set as the wide-band Sonitus Compressor described in the previous column. There's even per-band Normal/Vintage mode switching (the latter emulating an LA-2A), and the option for upward expansion with ratios below 1.0.

The Ways Of Mod Are Strange!

You can think of Sonitus Modulator as an overachieving collection of guitar stompboxes. I did 30 Modulator presets for Cakewalk's 30th anniversary giveaway, and it wasn't hard to come up with them! The most important parameter is the Mode drop-down menu, because here's where you can choose from Flanger, Ensemble, String Phaser, Phase 6, Phaser 12 and Tremolo. However, the complement of controls is flexible enough that you can also do effects such as vibrato, auto-panning, resonator, rotating speaker, centre–channel cancelling, lo-fi and ADT (automatic double-tracking). The only significant limitation is that you can't sync the LFO to tempo; as with Wahwah, you have to set a tempo value manually.

Screen 2 shows four effects done with the Modulator's Flanger module. My stereo ADT setting preserves the stereo imaging well, while producing the ADT effect. The key to vibrato is setting the mix to 100 percent wet and delay to minimum, so there's no perceived delay when you increase the Depth control to set the vibrato effect's depth. Rate controls the vibrato frequency. The lo-fi effect's crucial controls are Feedback and Cross Mix: the higher the Feedback value, the more distorted the sound. Cross Mix provides a variation on this basic dirty sound.

My favourite Modulator effect is true, through-zero flanging. Back in the '60s, my band had sessions booked after Hendrix was recording Electric Ladyland, so we were able to use his tape–flanging effect — and that sound has been forever burned into my brain. Although few effects allow for through-zero flanging, the Modulator does: enabling the Tape button delays the dry signal so that the flanging effect cancels at minimum delay (the Mix Invert button also needs to be enabled).

However, tape flanging was a manual process, so the use of a periodic LFO to control the delay time gives an aural cue that the flanging isn't authentic. The Sonitus keyboard shortcuts solve this: click on the Rate slider, and use your QWERTY keyboard's arrow keys (either left/right or up/down) to change it slightly. Slowing down and speeding up at strategic moments enhances realism and expressiveness.

This preset is ripe for tweaking. My preferred flanging waveform is the Peak 2nd Inv or Twin Peaks, but the other ones work too. The Depth control determines how far the flanger will go before it bottoms out; 10ms seems about right, but sometimes tape flanging would get a little out of control and a 15ms delay can approximate that effect. For the most accurate tape flanging emulation, set Phase to 0. Increasing this spreads the effect more in stereo, but at the expense of less drama.

Finally, you can add a low– or high–cut filter with the EQ button. With some source material, the bass becomes exaggerated when flanging hits the low frequencies. To trim this, start with a low cut around 0.1kHz. You can also cut highs, but I haven't found this useful with flanging. 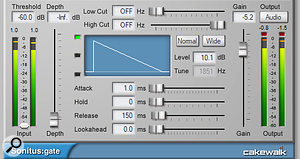 Screen 4: Here, the Gate is being used in Punch mode, which acts somewhat like a transient shaper.Finally, we come to Sonitus Gate. Distinctive features include a ducking mode (in which the gate is normally open, but the control signal closes it), and a Hold control that's ideal for gated drum reverb. And regardless of what the documentation says, the gate can accept side–chain signals, and also allows for side–chain filtering — so you can, for example, filter out the highs to gate a signal from a drum part's kick.

But the unique feature is Punch mode, which serves as a type of transient shaper. This works regardless of whether or not you're gating the signal (so the Threshold can be all the way down if you want to process the entire signal), and emphasises an envelope's leading edge. The button for choosing Punch mode is to the right of the Normal/Duck button. With Off, there's no punch. Wide gives a broadband punch, with the amount set by the Level parameter. You can also choose Tuned mode, which allows you to use the Tune parameter to emphasise a specific frequency range.

So once again, Sonitus show why these effects have stood the test of time.