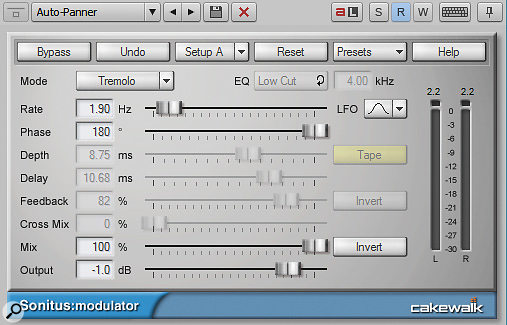 Get the best out of Sonar’s surprisingly powerful Sonitus Modulator plug-in.

In 2003 Cakewalk acquired the Norwegian company Ultrafunk AS, makers of the Sonitus effects pack. Today, because a lot of people listen with their eyes, they see the non-skeuomorphic interface, realise the plug-ins have been around forever, and assume that shiny new plug-ins with pretty graphics must be better. Well, not necessarily! Ultrafunk got it right, and to this day, the Sonitus plug-ins offer features that aren’t available in many other, more ‘modern’ alternatives. However, making best use of these requires some insider knowledge... hence this column.

The Sonitus Modulator has six modulation modes (Flanger, Ensemble, String Phaser, Phaser 6, Phaser 12, and Tremolo), all with a common interface. However, not all controls are available for all modes. We’ll start by looking at common characteristics, then cover tips for the Sonitus Modulator plug-in — one of my favourites because of its versatility.

There are six different LFO waveforms, and you can automate the LFO waveform parameter. Here are the percentages that correspond to particular waveforms when setting a node in the automation lane:

With flanging, tremolo and the like, sweeping through these options with automation gives a sort of randomising effect. When used with auto-panning on something like percussion that’s not sustained, you’ll hear the percussion appear in seemingly random parts of the stereo field. You can reduce this effect’s ‘obviousness’ by setting the Mix control to less than 100 percent.

One Modulator limitation is that (in theory) you can’t sync the LFO frequency to tempo. (Of course Bo Diddley couldn’t sync his tremolo to tempo but, then again, maybe the lack of sync actually made it more interesting.) If you do want to sync to tempo, there’s an option that works well if the section where you want the processing has a steady tempo.

First, you need to calculate the LFO frequency that relates to your tempo. The chart below shows the amount by which you need to divide the tempo in bpm to have an LFO frequency equal to a particular note value:

So, for example, if the tempo is 126 bpm and you want the tremolo to chug along at dotted eighth notes, simply divide 126 by 45, to get 2.8 — so you’d set the LFO frequency to 2.8Hz. Note that the LFO frequency resolves to two decimal points, so for some tempos you can’t have an exact match. However, it will be close enough to be able to maintain sync for quite some time.

Because you can’t restart the LFO at a predictable point in its cycle, for slower LFO settings you’ll need to start Sonar’s playback at the desired point in the LFO’s cycle (because it doesn’t sync, it will be running even with Sonar stopped). Generally, for faster settings it doesn’t make much difference at which point on the LFO waveform cycle modulation begins.

If the LFO starts to drift out of sync (such as if you couldn’t set the LFO frequency with sufficient precision and the section to be processed is lengthy), one workaround is to send the track output to an aux track, and record the processed signal into the aux track. If the LFO goes out of sync, set the punch-in time for the aux track before the loss of sync occurs. Back up to before the punch point, start recording, and when punch-in occurs the LFO will sync to tempo until it drifts again. Hopefully it will start close to the right place on the LFO waveform cycle.

However, I don’t want to make a deal about this. Most of the time the LFO frequency precision is sufficient, unless you want the effect to last for lots of measures. Now, let’s cover specific Modulation applications.

In Tremolo mode, setting the Phase slider to zero creates a conventional tremolo effect. As you increase the phase slider toward 180 degrees, the effect turns into an auto-panner, with higher values increasing the width compared to the centre. With either tremolo or auto-panning, the Mix control varies the effect’s intensity.

There are two ways to switch the tremolo effect to double time. The simplest is to use automation to change the LFO waveform from any other setting to Twin Peaks. However, you can also decrease the level automatically as the effect morphs into double time, and you don’t need to change waveforms; click the Invert button next to the Mix fader, and move (or automate) the Mix more toward centre.

Back in the ‘60s, my band had sessions booked after Hendrix was recording Electric Ladyland, so we were able to use his tape flanging — and that sound has been forever burned into my brain. Although few effects allow for true, tape-like through-zero flanging, the Modulator does: enabling the Tape button delays the dry signal so that the flanging effect cancels at minimum delay (the Mix Invert button also needs to be enabled). 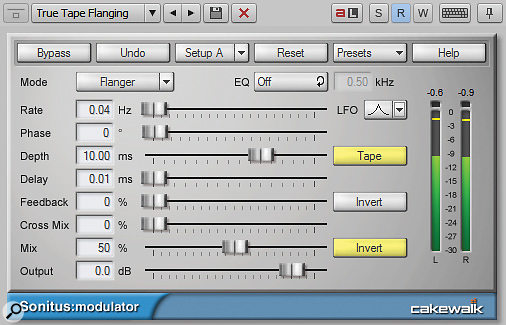 However, true tape flanging was a manual process, so a periodic LFO gives away that it’s not real flanging. This is where the keyboard shortcuts come in handy. Click on the Rate slider, and use the arrow buttons to change it slightly. Slowing down and speeding up at strategic moments makes a big difference in terms of realism and expressiveness.

This preset is ripe for tweaking. My preferred flanging waveform is the Peak or Peak 2nd Inv, but the other ones work too. The Depth control determines how far the flanger will go before it ‘bottoms out’. Ten milliseconds seems about right, but sometimes tape flanging would get a little of control and a 15ms delay can approximate that effect.

For the most accurate tape flanging emulation, set Phase to zero. Increasing this can be useful, though, as it spreads the effect more in stereo (at the expense of less drama).

Finally, you can add a low- or high-cut filter. With some audio, when flanging hits the low frequencies the bass becomes exaggerated. To trim this, start with a low cut around 0.1kHz. You can also cut highs, but I haven’t found this useful with flanging.

The Modulator also makes a novel resonator. Getting repeatable results takes a little work, but try this and you’ll see why it’s worth the effort — or just play with the sliders, and get a zillion happy accidents for sound design. You can always record what you’re doing into an aux track to preserve the real-time audio tweaks. The following example shows how to create a resonator with an extra ‘voice’ that can slide smoothly over an octave range. 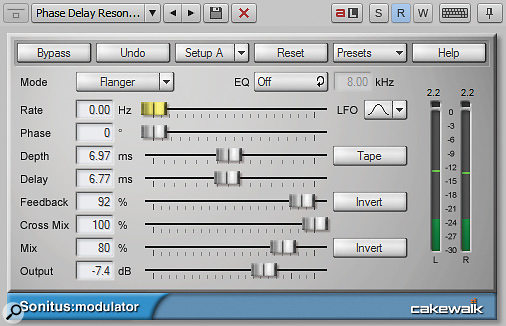 This resonator setup is very different from the usual delay-based effects.

Start with the Depth and Delay parameters set about the same, but with a slight offset. Turn up Cross Mix close to maximum to increase the effect intensity, which makes it easier to ‘calibrate’ the effect (after you’ve dialled in the sound, set it however you want). Increase the feedback to where you hear a tone, choose sine wave for the LFO mode and set the Rate to 0.00. Phase must be at zero, initially.

Now comes the hard part: setting the LFO to the top of its waveform’s range. To do this, click on the Rate parameter so you can adjust it with the arrow keys. Hit the right key so the LFO shows 0.01. You’ll hear the tone’s pitch change slowly either up or down, depending on the LFO’s state when it started. When the tone is at its highest pitch, hit the left arrow key so the frequency is 0.00; this ‘freezes’ the LFO frequency and waveform state. It may take a few tries to get it right, but the advantage of the sine LFO waveform is you have more time than with a triangle or peak waveform.

Next, tune the Delay to the desired pitch, and then move Depth to match it but with a slight offset. Vary the Phase control, and if you caught the LFO at the right place, it will cover an octave range of resonance, layered on top of the fixed pitch set by the Delay control. And yes, you can automate the Phase control... it’s almost like some strange kind of portamento or whammy bar that does amazing effects for drums and percussion.

There are various shortcuts that help you get around the Modulator effects quickly. If you click on a slider, for example, the left/right arrows adjust it in the smallest increments possible. The Page Up and Page Down keys adjust in larger increments, while End goes to the maximum value, and Home to the minimum. The space bar toggles buttons between on and off states. If the button has multiple options, the space bar will cycle through them.