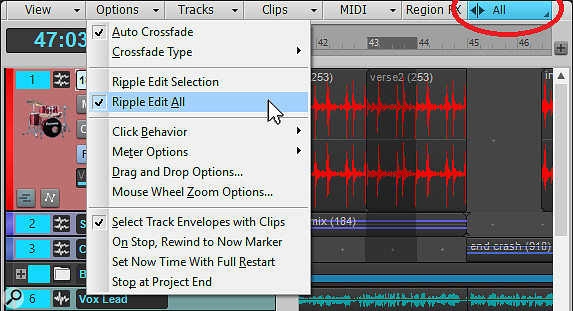 Screen 1: You can choose the ripple editing mode in the Track View Options menu. Note the indicator that shows whether ripple editing is on or off, and whether it affects All or Selection.

Find out how to get the most out of Cakewalk's ripple edit modes.

Ripple editing has been a staple of video editing, and is available in many audio programs too. This type of editing automatically moves content on the timeline after performing edits that add or remove time, thus completing some editing operations automatically. For example, if you cut a section of a song, the 'hole' that's created closes up automatically, with everything after the section you removed sliding to the left to fill the gap. Or, if you insert extra material into a song, the song will open up enough space to accommodate what you want to paste — it's not necessary to create a space first, and then paste. Actually, I've always thought of ripple editing as editing the timeline, with the clips just along for the ride. (Note that ripple editing works in Track View, but not the Piano Roll View.)

Sonar had some ripple-editing functionality, which included the Delete Hole function when cutting, and the ability to insert measures when you wanted to push material ahead in the timeline. However, there were multiple limitations, like what happened with MIDI notes when you deleted a hole. These were a source of frustration, but in May 2017 Sonar adopted true ripple editing and in a recent update, Cakewalk added a ripple editing on/off indicator.

Before going any further, always remember the cardinal rule of how to avoid unintended consequences with ripple editing: turn off ripple editing after doing an edit, so you don't move clips around accidentally. If you leave ripple editing on inadvertently and start moving clips, you may end up moving ones that are far enough down the timeline that you don't see the results, until it's too late to do anything — well, other than hitting Undo a lot.

In addition to being extremely useful when doing arrangements, ripple editing is also helpful for assembling albums when mastering. You can move clips around to try out different song orders, and the other songs will automatically open up to accommodate new song placement, while closing up where the clip used to be.

Following are some examples of how ripple edit works, for both the Ripple Edit Selected and Ripple Edit All modes. 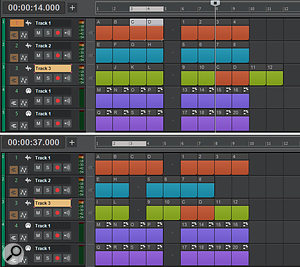 Screen 2: Inserting clips from one track into another clip (top), and the results of removing clips from several tracks (below).Audio clips C and D in the left group, which are highlighted in Screen 2, have been copied. (Note that it's easier to visualise each clip as a solid block when you untick Display Clip Contents in the View / Display menu.) Placing the focus on Track 3, inserting the Now time at measure 8, and choosing Paste pastes C and D on Track 3, starting at the Now time, and pushes clips 11 and 12 to the right to make room.

Next, let's cut clips F, G, J and K from the upper screen shot. The lower half of Screen 2 shows the results: the clips to the right of G and K have shifted to the left starting where F and J had been, respectively.

As an example of Ripple Edit All, refer to Screen 3. Suppose you want to copy clips 2, 3, 6, 7, D, 11, 14, 15, 18 and 19 (in the middle of the right group), and insert them at measure 2. Select the measures you want to insert, copy them, place the Now time at measure 2, choose Track 1 as the focus (ie. the focus should be the highest-numbered track of the selection), and paste. The lower part of the screen shows the result. The selected clips have been pushed to the right, due to the space opened up by copying these clips starting at measure 2. 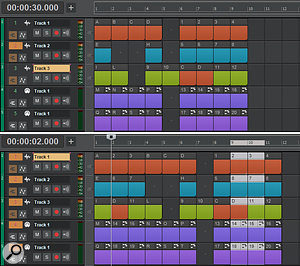 Screen 3: The upper shot shows clips before editing, while the lower shot shows how inserting clips pushes existing clips further down the timeline when in Ripple Edit All mode.With Ripple Edit All, it's also easy to delete 'holes', and unlike the old Delete Hole command, there no longer needs to be data in the hole to make this happen. If nothing is selected and you drag across the timeline to define a region, this automatically selects all tracks and therefore all clips within the region. Hit Delete, and the group of clips that was to the right of the clips being deleted now moves left, to the beginning of where the deleted clips originally began. Also note that if Ripple Edit Selected is enabled instead of Ripple Edit All and you drag across the timeline to select a region, and if one or more tracks are selected, the hole will be removed only for those selected tracks. 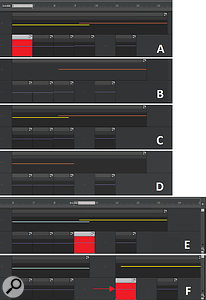 Screen 4: How ripple editing works with MIDI data in various scenarios.In section A, the clip highlighted in red is about to be deleted; note the timeline selection that encompasses measure 6. With Ripple Editing Select All, deleting this clip deletes everything in measure 6, so clips that started at measure 7 shift over to the left to start at measure 6 (section B). Note that because cutting deletes the start of a MIDI note (coloured yellow for clarity), there is no longer a Note On command, so cutting removes the note.

In section C, measure 7 was selected in the timeline instead of measure 6, and cut. With measure 7 cut, what started at measure 8 now shifts left to measure 7 to fill in the hole. Because the yellow MIDI note's Note On event is not included in the cut, the MIDI note simply becomes shorter. The note would also have been shortened had measure 8 been cut.

In section D, measure 9 was selected and deleted; note that two MIDI notes were within this region originally — the end of one long MIDI note, and a Note On event for a second MIDI note. Cutting deletes the part of the first MIDI note that's contained within measure 9, thus shortening it. Cutting also deletes the second note because its Note On event falls within the region being cut.

As to what happens when you insert data with MIDI, refer to section E. Measure 9 is selected in the timeline, and the clip highlighted in red is ready to be moved two measures to the right so that it starts at measure 11. Note the positions of the MIDI notes highlighted in light blue and yellow. In section F, the material that started at measure 9 now starts at measure 11. Because the yellow MIDI note's Note On message was within measure 9, the note moves along with the other clips. The MIDI note highlighted in blue remains unchanged because there was no cut (moving the blue MIDI note's end would create a new, and likely unwanted, MIDI note fragment with a Note On message starting at measure 11).

Finally, note that ripple editing can also provide some of the functionality of other programs that have arrangement tracks. The difference in Cakewalk is that you either need to group the clips so they'll stay together, or select the range in the timeline each time you want to move clips around, as opposed to identifying the collection of tracks as a single entity in an arranger view.