The drum kit used to create the Rogers Big R Dub Kit was put together specifically for dub and ska music, and was used for the Drumdrops In Dub Volume 3 and Drumdrops In Ska sample libraries. Unlike those products, however, this library can be used as an instrument in Kontakt or as a source of drum samples for other sample players. Indeed, like Drumdrops' 1963 Premier Outfits 54 Kit that we reviewed in September, it can be purchased in full as a Kontakt instrument, as a set of multi-velocity samples with templates for all the major software samplers, or simply as a collection of single-hit samples.

The kit features two Ludwig snares, namely a 14 x 6.5-inch Black Magic and a very different-sounding 14 x 5-inch Acrolite. They are joined by the titular Rogers 'Big R' 24 x 14-inch bass drum, a 16 x 16-inch Premier floor tom and two Rogers rack toms. There's also a hi-hat and crash, a timbale drum, a set of bongos and even some electronic percussion created with a Boss PC2 Percussion Synthesizer and a Tama Techstar TS204.

The drummer, reggae specialist Horseman, was recorded by Mike Pelanconi at his own studio, The Ironworks, in Brighton, apparently making use of a custom 28-channel Class-A BBC console dating from the 1970s. Interestingly, the kit was recorded without room mics for a tight and dry sound, and also without compression.

The sound of the kit, as you'd expect, is tight but mellow, without much natural reverb and no resonance to speak of. The snares and toms are tuned high to give that classic reggae tone that combines with the timbale so well and sits nicely alongside lovely dubby bass lines. The kick and floor tom have a satisfying thud, but are 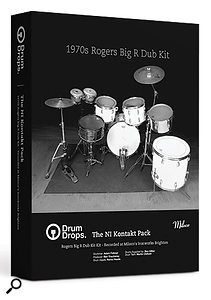 resonance-free. In short, it's a long way from a typical rock kit sound.

From there the user has the option of manipulating each drum sound using the mixer's EQ, pan controls and faders, various dub and reggae-specific delays and reverbs, and a transient processor. More in-depth editing can be achieved by adjusting velocity curves and individual tuning, and there is the option of affecting the whole mix using a bus compressor and tape saturation simulator.

In itself, the kit seems rather simple, but there are up to 16 velocity layers for each articulation and the 'Full' kit (there is a less memory-hungry 'Lite' version), offers round-robin variations for realism. Apparently the kit uses 5352 samples in all, which is quite impressive. On the keyboard, the snare, kick and toms have no more than two key options each, so even though the sampling and scripting is complicated, playing is not. The hi-hat, though, which can be hit in different ways and played open, closed or somewhere in between, has quite a number of options that are spread out across two octaves of black notes.

There are no MIDI grooves or audio loops included, but compared to products that do offer those kind of features, the Rogers kit costs very little. All in all, it provides a lot of quality for relatively little money, and there can be no complaints about that. Tom Flint