The tiny 8 Step Program is capable of all sorts of creative CV control.

The Electro-Harmonix 8 Step Program sounds a bit like a regime for weight loss or self-improvement, and while it might be those things accidentally, deliberately it's a sequencer for gaining extra mileage from other effects pedals, or any gear with a voltage input. In a nutshell, it's a compact source of looping voltage patterns. If it helps you to imagine practical applications, think of each step in the sequence as the position of an expression pedal operated by superhuman ankle control.

A study in guitar-pedal chunkiness, the 8 Step's three footswitches are probably sufficient for most guitarists in a live situation. Made from solid, white-painted metal, the pedal is the size of a CD case and stands about 60mm tall from its rubber feet to the tips of its switches. Pressing Play starts the sequencer lights running at a speed determined by the Rate slider, by MIDI clock, or from a few presses of the Tap Tempo switch. The tempo range is impressive, covering approximately 17bpm up to 3000bpm, so I doubt you'll have any difficulty setting it to keep up with even the most pill-addled drummer! During playback, you can zip back to the first step any time by pressing the middle Reset switch. 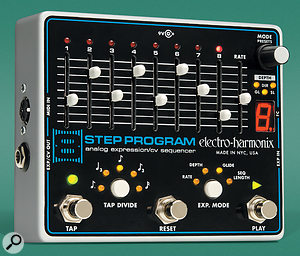 Since batteries aren't an option, power is sourced from a small 9V adaptor. A TRS expression cable is bundled in too, to instantly connect the 8 Step to anywhere an expression pedal currently fits. If that means yours is suddenly sidelined, the 8 Step has an expression input waiting, offering control of a chosen function such as sequence length or direction.

Generally, these functions are dialled up by the Mode knob, a combined rotary encoder and push switch. With repeated pushes, you step through the four available options, a bright amber LED indicating which is currently live. The first option is 'GL' or glide, valuable for smoothing the transitions between steps. With a value of zero there is no discernible slew, but as you crank it up, the resulting portamento blurs each voltage change. By selecting 'DIR' you can alter the sequencer's direction of travel, and the familiar choices of forwards, reverse, bounce (forwards then backwards) and random are up for grabs. A small one-character display represents these values (and other data) as simple abbreviations. Next along is 'SL', indicating you can freely modify the sequence length within its range of one to eight steps. With a last push, all three LEDs are lit and the encoder is used to set the maximum output voltage, up to a value of 5V. Owners of pedals that accept 3.3V as their maximum (for example, Eventide products) are advised to set the depth to 5.

Machines that produce short voltage patterns are conceptually very simple but, as is so often the case, the fun arises from what you do with them. Already I could see possibilities in the form of my Moogerfooger pedals, Eventide stompboxes and, of course, synths. Over the next few days the 8 Step squirted its expression and CV goodness into a large number of them, handling like a friendly, much-simplified step sequencer. For a modular or other synth with voltage inputs, it's a modulation source like any other. Alternatively, if you have a filter pedal inviting external control of the cutoff frequency, it opens up a world of sequenced filter effects broadly comparable to Roger Linn's AdrenaLinn pedals, or Moog's Murf.

On plumbing the 8 Step's expression output into my Eventide Mod Factor pedal and hitting Play, I got a brutal wake-up call. It transpired that to get worthwhile results, some preparation was required, and the ensuing racket challenged my previously unshakeable love of chaos! The problem lay with how I'd set up the expression-pedal response in my effect patches. Eventide stompboxes permit the morphing of multiple parameters between any two values, and I've never morphed just one when I could morph half a dozen! You can get away with that sort of thing when the changes are introduced by gradualfoot movements, but here the sequenced values made little musical sense. Fortunately, when I reprogrammed the Mod Factor with a rare injection of subtlety and restraint, the effect was far more palatable. Sticking to this regime of good taste, I was soon sequencing wah levels, chorus times, modulation speeds — basically anything my Eventide was capable of — by the simple act of moving the 8 Step's sliders until the rhythmic shifts sounded cool.

If you reckon you could eventually tire of looping effect sequences, there are a couple of other modes to explore. In One-Shot mode, the pattern plays through once, then waits for you to press Play again, but my favourite mode was Step-Thru, in which progress through the pattern is achieved manually with the Play switch. Here's where some kind of organisation of effect patches is essential if you are to reliably call up the correct sequence each time.

The 8 Step's internal memory captures its full state, including mode, into 10 readily accessible user patches (called presets). I say 'readily': you first need to hold down the Mode encoder for a couple of seconds so it enters preset mode. You can avoid this wait by purchasing the optional foot controller, or with a little MIDI dabbling; in either case you're rewarded by the discovery there are actually 100 presets to fill. When a new preset is selected, its sequence doesn't start immediately, but kicks in when the current one ends. So however you're sync'ed, everything remains neatly lined up.

Synchronisation, whether with machines, humans or drummers, is about as unfussy as it gets. The 8 Step automatically syncs to incoming MIDI clock but is equally happy locking to an analogue clock pulse, to its own Rate slider, to Tap Tempo and even to movements of a connected expression pedal. Watch out for the Rate slider, though. It looks exactly like the rest, but grabbing it by mistake can yield unpleasant surprises because, unless you're sync'ed to MIDI clock, it instantly overrides the tempo.

Regardless of how tempo is assigned, the Tap Divide button is on hand to select progressively smaller timing intervals, including dotted notes and triplets. There are no long, slow divisions though, so you have no way to spread the loop evenly over several bars. If you do crave longer, less hectic sequences you'll have to rely on stepping through yours manually.

There's more to the MIDI implementation than synchronisation — much more. As far as the 8 Step is concerned, you name it and MIDI can be put in charge of it. Interestingly, this includes the saving and loading of presets, even the extra ones the foot controller is designed to exploit. Even rudimentary MIDI skills might therefore save you a bob or two. Unusually, you can reprogram each slider remotely — even the Rate slider. Admittedly, this only makes sense if you aren't sync'ed to MIDI clock.

Also unusual is the inclusion of a MIDI CC to position the sequence directly at any step. If you're stopped or in Step-Thru mode, this could be handy to summon any selection from eight stored expression/voltage values, ordinarily the sort of task where you'd reach for a MIDI-to-CV converter.

The 8 Step Program isn't an ordinary effects pedal, but it's surely as much sequencing fun as you can expect for £100$120. It needn't be confined to conventional sequencing either. Thanks to Step-Thru mode, it can be thought of as a repository for exact expression-pedal values to be recalled at will. In that role I found it ideal for pre-selecting favourite delay times on my Eventide Time Factor, or frequency shifts on my Moog Ring Modulator pedal, amongst many other examples. Thanks to the extensive MIDI implementation, you might not need the optional foot controller, but it could be handy when playing out, especially if you have created many presets.

Despite its size and simplicity, the 8 Step is brimming with potential for the experimentally minded, whether it's drafted in to sequence the effects of other pedals or to drive a voltage input of a synth (lacking a gate output, it can't perform all the jobs of a traditional step sequencer). Ultimately, how much value you'd get from it depends, primarily, on how extensive your collection of pedals is. After that, the only other issue is that it takes a session or two of thoughtful application before the best tricks present themselves. A niche product undoubtedly, but one that's pretty hard to fault.

If the 8 Step's 10 presets aren't enough, Electro-Harmonix offer an optional foot controller giving rapid access to a further 90. The catchily named 8 Step Program Foot Controller is a tiny but rugged steel box featuring two footswitches and a selector knob. With it you can select presets by turning the knob or by stepping up or down through the 100 presets using footswitches.

Anyone capable of remembering 100 different eight step sequences is more nimble-brained than I am, but at around £50$62, the foot controller is relatively affordable and requires no power: connect it to the main unit via a standard instrument cable and you're away. All in all, it's a useful add-on, and it makes saving presets more straightforward too. 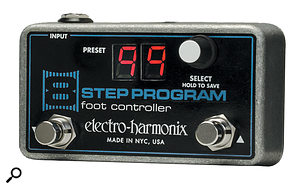 A solid little pedal that performs no audio processing itself. Instead it adds simple, controllable step sequencing to other pedals, providing they have an expression or voltage input.