The aim of this particular instrument from Drumdrops is to approximate the sound of the late-‘60s and early-‘70s kit recordings from Royal Studios in Memphis, as heard on records by the likes of Al Green and Ann Peebles.

Apparently the producer of those records, Willie Mitchell, preferred a small dry room and a three-to-four-mic setup. Drumdrops stopped short of recording in Memphis (instead using The Square studio in central London), but did restrict their setup to just four mics (plus room), placed so as to capture the whole kit from different positions. 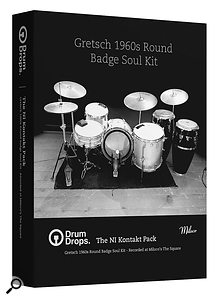 Three Coles 4038s were set about the kit, one between the hi-hat and the rack tom, a second under the ride cymbal, between the rack tom and the floor tom, and a third about four feet behind and to the right of the drummer. The final on-kit mic was an STC 4021 situated overhead, directly above the snare. Preamps used were a Neve 1066, two Telefunken V76s and a Calrec PQ1061. The team also positioned a Neumann U47 FET mic a little way from the kit to capture the room.

The kit itself was suitably dampened in various ways, as it would have been back in the day, and was recorded to two-inch tape running at 15ips.

Like all of the Drumdrops Kontakt instruments, the Round Badge is accessed though a very well-equipped interface, available in Full and Lite versions. It’s main tool is the mixer section which provides control over each element of the kit. Apart from the standard level, mute, solo, pan and phase reverse controls, there is a reverb, EQ, transient processor and mic blend control for every channel. In particular, adjusting the mic blend is a fast and easy way to alter the sonic character of the kit. Finally, a compressor and tape saturation emulator are strapped across the master bus.

As is standard for a Drumdrops instrument, it is possible to swap snares (and in this case there are four options to choose from), tweak the tuning and change the velocity curve for every kit element.

Other tools include a very flexible 32-step sequencer and a groove player with its own library, both of which are now standard issue for Drumdrops Kontakt kits.

Sound wise, the instrument has lovely, splatty short snares; a big, bulbous kick that’s loose but solid, and thick booming toms. The percussive instruments really seem to benefit from the recording style too, in that they are detailed but not at all harsh. The room ambience describes an intimate and dry space and invokes images of smoke-filled basements.

It’s almost stating the obvious to say that the kit has a soft sound compared to modern styles, but it still retains a kind of punch, and because it isn’t particularly harsh, there is considerable scope for boosting its level during breaks.

A lot of old funky drumming was very frantic, but managed to drive the track along without getting in the way. This kit has that kind of potential and I like it a lot. Tom Flint