It’s billed as a ‘digital delay with an analogue heart’ but does this compact device offer anything you can’t already get in the box?

If there’s one thing I love above all else about the hardware products that I own, it’s that everything I do with them has to be set up from scratch, is unique to the particular musical moment, and the inspiration has to be recorded there and then. For me, there’s no going back to recreate that sound on another day — I can get close, but it’s never just as it was. I find this to be especially true with delays on instruments, where the delay is an integral part of the feel of the performance. 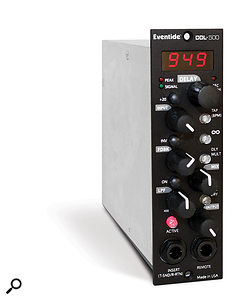 The DDL–500 Digital Delay Line is Eventide’s first foray into the burgeoning 500–series market, and although it isn’t the first 500–series delay — that title goes Moog’s Analog Delay (http://sosm.ag/moog–delay500) — it’s the first digital 500–series delay. Unlike many modern delays in which the internal signal path is entirely digital, though, the DDL–500 keeps the input signal and the wet/dry mix in the analogue domain, with only the delay processing entering the digital domain to produce, as Eventide put it, “a digital delay with an analogue heart”.

The DDL–500’s black front panel is a pretty intensively occupied area. A large display sits at the very top and this, coupled with the Sec(onds) LED that illuminates when the display is showing seconds rather than milliseconds, covers the full range of delay times from 0.11ms to 160 seconds. The delay time can be entered via a detented rotary encoder located underneath the display. This control has a momentary push switch that brings in its Coarse setting to speed up delay-time selection. The DDL–500 also has a tap-tempo function, accessed either through the Tap button that sits just below the Delay encoder, or via a momentary footswitch plugged into the front panel’s TRS Remote jack socket.

The DDL–500’s default digital delay time is 10 seconds at 192kHz/24–bit. Activating the Dly Mult(iply) function can increase this, at the expense of the sampling frequency, in discrete steps from 2x to 16x, giving a maximum of 160 seconds at 12kHz. The multiplication factor is retained at power off. The FDBK (feedback) knob sets the number of repeats by controlling the amount of delayed signal being fed back into the delay input. This feedback signal is analogue and can be polarity–inverted via the INV switch, to give a different tonality to the delayed signal that comes into its own when using the Infinite Repeat function and very short delay times to generate pitched delay–based tones.

The delayed signal can also be modified by the switchable 12dB/octave 400Hz to 20kHz analogue low–pass filter, sitting after the TRS jack insert socket that follows the D–A converter. This filter allows you to progressively remove the high-frequency and mid–range content of the delayed signal, either for effect or to match the tonality of the original signal.

The input level entering the delay section is monitored via a red Peak LED that comes on when the signal reaches 0dBFS, and a green signal–present LED illuminates when a signal of –60dBFS or more is detected. A 20dB input-gain boost and the following Input control allow you to control the input level, whilst an analogue soft–clip limiter protects the digital delay circuitry from being overloaded. The Kill Dry switch doesn’t do what you might think — it actually disables the input to the delay, effectively soloing the dry signal.

Once the delayed signal has passed by or through the low–pass filter, it recombines with the dry signal at the wet/dry Mix control. An Output Level control does what it says, and the entire analogue and digital circuitry of the DDL–500 can be hard–bypassed via relays at the input and output that are controlled by the Active switch.

At its default 10-second, 192kHz setting, the DDL–500 delivers the impressive sonic performance you’d expect of an Eventide product. The quality of sound and the clarity of the delayed signal are exemplary and the delays themselves sound completely natural. Increasing the delay multiplier — achieved by holding down that function’s switch and turning the Delay encoder — didn’t begin to audibly degrade the sound until I’d reached a factor of six, giving 60 seconds of delay at a 32kHz sampling rate. As the Dly Mult switch effectively toggles between the default and multiplied delay times, you can easily compare sounds and select the most appropriate multiplier. I’m personally rather fond of ‘lower–fi’ delays (an old and somewhat worn tape–based Watkins Copicat and an early Yamaha SPX90 multi–effects processor have been part of my arsenal for years) so I had a lot of fun with high multipliers and short delay times. As with all the other switches on the DDL–500 front panel, the Dly Mult illuminates when active, so checking what you’ve got going on overall is quick and simple.

The DDL–500 display shows bpm when you set the tempo via the front–panel tap–tempo switch or a footswitch connected to the Remote TRS jack socket. The DDL–500 also features a Tap Divider function, accessed by holding down the Tap button and using the Delay encoder to set the division, to derive a delay time with a musical relation to the dry signal. Divisions can range from 16th-note triplets (the delay time is 1/12th of the tap rate) to four bars (the delay time is 16 times the tap rate). If you do the maths, a bar of 4/4 takes two seconds at 120bpm (120 quarter notes per minute). A quarter-note delay time is therefore 500ms, a 16th note is 125ms and a 16th note triplet is 41.66ms. Similarly, a four–bar division would result in an eight–second delay.

Of course, synchronising delay time and music only works if both musician and delay are working to the same tempo, which may necessitate the presence of a click track — at least for the musician. If I were looking to integrate the DDL–500 with a DAW, I’d probably end up adding something like a MIDI Solutions Relay to enable me to set the tap tempo by using MIDI note–on/note–off messages from the DAW.

The TRS Remote jack accepts either a momentary switch (single or twin), a continuous controller or a 0 to 3.3 V control voltage and to assign these to a total of nine functions, five momentary and four continuous. These assignments are made in System Mode, which is entered and exited by pressing and holding the Delay knob and the Tap button for three seconds. The Delay knob then selects, toggles between and sets Parameters and Assignments. Two hitherto inaccessible delay functions appear in system mode as continuous assignments — Inverted Delay Time and Delay Glide.

To round things off, the front-panel Insert jack opens up other possibilities, either as a pre–low–pass-filter delay ‘sniff’ taken from the insert send and an input to the low–pass filter on the return, or as its intended purpose of allowing you to add signal processing to the delayed signal prior to the filter.

Whilst you can use the DDL–500 to capture passages of audio as the basis for loops or to create spaced–out, long delays and ambient echoes, the most common time-domain effects — slap–back delay, double-tracking, vibrato, flanging, phasing and chorus — only require delay times in the sub–100ms region. However, to obtain the latter four effects the delay time must be modulated, and this is where the DDL–500 falls down for me: it doesn’t possess an onboard LFO, yet one of these is required to produce the necessary modulation. Although you can alter the delay time using an expression pedal plugged into the Remote jack, keeping up the required even 3–8Hz modulation manually is a bit above and beyond the call of duty! You’d need to connect an external LFO to deliver the necessary control voltage in order to enable the DDL–500 to deliver these delay-time modulation–based effects. However, if you’re into comb–filtering sounds, manually manipulating the delay time in real time as you play or sing may well prove irresistible.

Viewed as a simple mono digital delay line, the Eventide DDL–500 delivers a simply superb performance. Moving through the sonic possibilities between the pristine clarity of the delayed signal at the default 192kHz sampling rate and the limited bandwidth at 12kHz, you’ll find a delay character in the DDL–500 that you can tailor to suit every instrumental and vocal application that I can think of.

Since most delay effects require delay times of milliseconds rather than seconds, to me the absolute delay times of the DDL–500 are really pretty irrelevant. It’s the changes in delay character that accompany the trade–off between the increase in delay and reduction in sampling frequency, coupled with the saturation effects of driving the analogue soft–clip limiter hard, that make the DDL–500 sonically interesting.

Although manually changing the delay time with an expression pedal will produce wonderful comb–filtering effects, the need to get together an external LFO in order to produce chorus, flanging and phasing effects is a bit of an ask for those of us who work only with audio, but denizens of the seemingly ever–expanding world of modular analogue synthesis — where LFO outputs abound — are going to that find the DDL–500 is right up their street.

So, is the DDL–500 worth the money? If you want this level of audio performance in a 500–series format then absolutely it is. In my personal setup the DDL–500 would be a bit of a luxury — but then sometimes a bit of luxury is a nice thing to have!

In the same 500–series format, there is, at the time of writing, only one alternative — the Moog Analog Delay, a plug–in-controllable bucket–brigade delay. But I’m sure it won’t be long before there’s more competition!

The Eventide DDL–500 is a mono digital delay line in which the entire signal path, with the exception of the actual delay process itself, stays in the analogue domain. This, combined with a native 10–second delay at a 192kHz sampling rate, gives the DDL–500 a very natural basic sound. It isn’t a low–cost unit, but the DDL–500’s sonic performance justifies its price tag.