So far in the pages of SOS we have looked at two Drumdrops products — the Vintage 1963 Premier kit and the Rogers Big R Dub Kit — both of which can be purchased either as Kontakt instruments, a series of multi‑velocity files backed up with sampler templates or, for the cost‑conscious, as single hits (with three velocities). The Mapex Heavy Rock Kit is available in the same three formats, but Drumdrops have added the Drum Replacement Pack (containing templates for Slate Digital Trigger v2, Drumagog 5 and DrumXchanger) and the All Samples pack, which is aimed at customers who want to build their own sampler templates using 24‑bit WAVs.

The Kontakt option is the most expensive and fully featured of the five. Its custom interface is based around a fairly comprehensive nine‑channel mixer offering built‑in dynamic processors and close, overhead and room mic ratio controls for each channel, not to mention a whole bunch of effect options spread across two send buses. 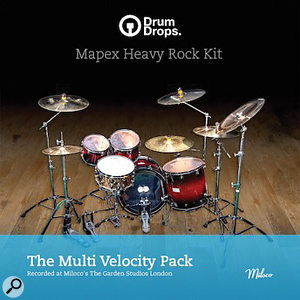 For the most part, the mixer is the same as it was on the previously reviewed Drumdrops instruments, and it retains the Settings page on which articulations can be tweaked and the Kit page where individual drum-tuning and velocity-curve adjustments are found. In addition to this, the interface has been given more functionality via a groove player with its own library and a 32‑step sequencer, collectively helping Mapex compete with rival products from the likes of Native Instruments. In short, Mapex has all the sounds and tools needed for creating complex drum sequences.

Rock drum sounds vary hugely, so it is best to think of Mapex as a generic tool rather than a definitive solution to every heavy rock problem. The overall kit sound isn't as hard and aggressive as I was expecting it to be, and derives its power from dark, full‑bodied sounds as oppose to potentially thin, ear‑splitting transient hits. The sampling has been done very cleverly so that the room sound aids realism, but does not aversely colour the kit.

There are three snare options: namely Bronze, Panther and Machete, which differ from one another in terms of tuning. Most of the other elements of the kit can't be swapped for alternatives, but being able to control the relative levels of the close, overhead and room mics makes everything reasonably customisable.

Not everyone will want to use the new groove player for their compositions, but it is a great tool for testing out the kit. The sequencer is also a great tool, and a fantastic addition to Drumdrops' interface. It is both easy and fast to operate and also includes a number of very handy features, enabling its users to do things like copy patterns from one element of the kit to another with just two mouse clicks, for example.

In summary, Mapex includes a lot of functionality for a lot less money than some of its competitors, and still sounds very good. Although it is branded as a heavy rock kit, its sound is appealing enough to work in a variety of situations, and the sequencer is flexible enough to allow very subtle programming. Tom Flint