If you need serious bass, and you've got the control room to handle it, Eve's flagship monitors might be just the ticket.

For those that don't yet know, Eve Audio were established by Roland Stenz, the former CEO of Adam Audio and, despite only being in existence for about three years, the company have established an extensive catalogue of monitor speakers spanning a wide range of sizes and prices. The whole range shares a common technical design approach, visual styling and underpinning technology, with rear-ported cabinets, a variation on the Air-Motion Transformer (AMT) tweeter (made so familiar in Adam's monitors), DSP crossovers and equalisation, and Class-D (PWM) amplifiers. The speakers are assembled in Asia, which allows them to be offered at a more affordable price, but the DSP is programmed and the complete system tested and aligned in Germany before shipping.

Paul White reviewed the modestly sized two-way SC208 model (October 2012), while Bob Thomas looked at the larger SC307 (February 2013), and both of my colleagues gave very positive plaudits — but it's now my turn to examine the massive SC408 range-topping model.

In case you were wondering, the model-numbering scheme is very simple: the first number represents the number of drive units employed, and the last number is the size (in inches) of the bass driver(s). So the flagship SC408 combines an AMT tweeter, a 130mm (five-inch) mid-range driver, and a pair of 'Silvercone' 200mm (8-inch) bass drivers. Eve Audio describe the SC408 as a four-way monitor, fundamentally because it has four drivers. However, in more conventional engineering parlance it is really a three-way design as the audio spectrum is split three ways (to the tweeter, mid-range, and identical feeds to the two woofers).

The substantial cabinet is ported with two large slots across the short dimension of the rear panel, and the cabinet as a whole measures 710 x 330 x 440 mm (WHD). It weighs a little less than might be expected, at just under 30kg, and a large finned heatsink (which gets warm but not hot) dominates the metal amplifier chassis that is set into the rear panel.

The two distinctively styled woofers employ a 1.5-inch voice coil, and the diaphragm material is a honeycomb structure coated in glass-fibre. The AMT tweeter is a slightly beefier version than most other models in the Eve Audio range, with a bigger magnet system to allow greater SPL. The centre plate, housing the tweeter and mid-range driver, is rotatable to allow the monitor to be used either in portrait or landscape orientations.

The monitor's internal DSP runs at 192kHz and provides the volume, crossover and user EQ functions. Audio signals between 30Hz and 250Hz are routed to the two woofers, with 250Hz to 3kHz going to the mid-range driver, and everything above 3kHz to the AMT tweeter. In keeping with the other models in Eve's range, each driver has its own amplifier module, providing 250W to each of the woofers and mid-range unit, and 50W for the tweeter — the combination providing a maximum SPL of 118dB at one metre.

Rear-panel facilities are very straightforward. In addition to the IEC mains inlet, voltage selector and associated power on/off rocker switch, there are just two analogue inputs plus a recessed bank of four DIP switches. The input connections comprise an electronically balanced XLR and an unbalanced RCA phono socket — both with 10kΩ input impedances — and these two inputs are summed internally, allowing both to be used simultaneously if required. A Burr-Brown A-D converter chip translates the analogue inputs to the digital domain for the crossover and EQ digital signal processing. 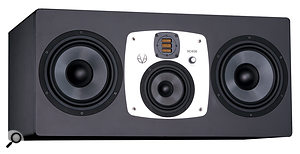 The first DIP switch sets the input sensitivity to accept peak levels of either +7 or +22 dBu. The second switch isn't used, but the last two lock out the front panel control to prevent accidental or unauthorised adjustment. So the third switch inhibits the volume from being adjusted from the front panel, while the fourth locks the current equalisation settings. Even in the lock mode, pressing and holding the front-panel encoder for three seconds causes the speaker to switch to a standby condition, and a subsequent brief press powers it up again, which is much easier than climbing around the back to the mains on/off switch!

Assuming the front-panel control functions are not locked, the volume and user-equalisation functions can be adjusted via a rotary encoder set into the tweeter/mid-range panel — exactly the same arrangement as used on the other Eve monitors. This has a ring of 24 orange LEDs set around it, along with clear legends to indicate the various operating modes.

The default condition uses the encoder to adjust the replay volume, although the scaling doesn't make the actual level setting entirely clear. Counter-intuitively, the '0' mark on the scale corresponds to a volume setting of -10dB. The resolution of the control varies with its position, becoming finer at the upper level settings, so the volume is adjusted in 0.5dB steps above -20dB, with 1dB steps between -20 and -48 dB, and then 2dB steps down to -80dB. The current volume setting can be indicated either as a single LED, or as a continuous ring rising from the counter-clockwise end, with dim or bright intensity.

Pressing the encoder knob accesses the user configuration 'menu', with the current setting being indicated on one of the bottom four LEDs (marked 'LED', 'Low', 'Desk' and 'High'). When the configuration menu is initially selected, the High LED blinks and a second steady LED indicates the current gain setting for the high-shelf EQ. The encoder can be rotated to select one of the other three menu options, after which a second press accesses that option for adjustment. The selected menu LED lights steadily, and further rotations of the encoder then adjust the EQ value or change the LED volume display mode. Pressing the encoder knob once again fixes that setting into memory and returns to the menu selection mode. The function times out to revert to normal volume control functions after a few seconds.

The High (above 3kHz) and Low (below 300Hz) shelf equalisers both allow boost or cut between +3dB and -5dB in 0.5dB increments. The Desk equaliser option is an asymmetrical mid-band filter, which provides either a notch filter centred at 160Hz in cut mode, or a narrow-band bell centred at 80Hz in boost mode. The idea of the notch is to compensate for the typical mid-band boost caused by reflections from a console's surface if the speakers are placed on or near the meter bridge. The 80Hz boost curve is intended to flap the trouser legs on kick drum beats!

Eve Audio's SC408 monitors are substantial beasts, almost identical in size and weight to my reference PMC IB1 monitors. I set them up in my listening room alongside the PMCs, in a portrait orientation and a midfield location, well away from room boundaries and roughly three metres from the comfy chair. Working with my normal monitor controllers (Bryston, Crookwood and Grace Design), I found an input sensitivity of +7dBu with the front-panel volume setting at -10dB allowed fairly normal volume settings to be used on the monitor controllers. All EQ options were set flat.

Initial impressions were of a very detailed and informative mid-range, with a smooth and refined treble that was perfectly balanced against the mids. I often find the need to 'tame' the high end on many monitors in my listening room by a decibel or two, but the Eve SC408's balance was spot on, to my ears. Should it be needed, the built-in EQ options would easily satisfy personal preferences or compensate for over-damped rooms.

As my listening progressed it became abundantly clear that this is a genuinely revealing monitor with superb mid-range clarity and precise tonal accuracy, as demonstrated by the extremely natural sound of spoken voices. Stereo imaging is also to very high standards, with wide and deep sound stages on appropriate material, and a very believable sense of depth and perspective. Pair-matching across the entire frequency range is also very accurate: wide-band noise produced a narrow, well-defined phantom centre image.

Of course, the aim of a physically large monitor like the SC408 — apart from being able to produce high SPLs — is to achieve good bass extension, and this model certainly doesn't disappoint. The specifications claim it is flat to 30Hz and I have no doubt that it achieves that! One of the benefits of onboard DSP is that it allows full optimisation of the frequency response, compensating for the natural roll-off character of the cabinet and bass drivers. Clearly, the two long-throw bass drivers on hand here deliver all the required LF energy with ease, and the response really is flat to 30Hz.

Impressive as that is from a technical point of view, it also places enormous demands on the listening room. Don't even think about installing this monitor unless you are absolutely certain that you have a sufficiently large room with properly designed and installed bass trapping in place! Without very well-sorted room acoustics, the huge amount of LF energy that pours from these monitors will set up frightening standing waves, rattling the walls and fittings, and producing very challenging peaks and nulls at different points in the room. In short, the sheer quantity and depth of bass produced so effortlessly by these monitors will overwhelm most rooms in an instant, making it virtually impossible to judge a mix properly.

However, given the appropriate control-room acoustics, the bass delivered by the SC408 is actually very well controlled, well balanced, and impressively extended. Solo double-bass tracks are delivered with a realistic scale and weight, balancing the instrument's fundamental tones and body with the harmonics and transient snap of hands on strings and strings on fingerboard. Kick-drum thumps move a lot of air, with a defined wave-front, and have perfect weight and solidity. There is also minimal port lag or resonance, and no audible port chuffing or other unwanted mechanical noises.

Overall, I found it a joy to build mixes on these monitors thanks to their clarity and very unfatiguing sound. Any low-frequency rubbish from microphone subsonics and the like are easily identified, allowing them to be removed cleanly before doing any damage to the wanted audio.

There is no doubt that the SC408 is an impressive midfield monitor, and in a large and well-treated room it will deliver a genuinely full-range sound picture with excellent clarity and definition, and superb stereo images. The extended and powerful bottom end adds a natural realism and scale to almost every source and instrument, and once heard you won't want to be without that bottom octave.

The SC408's price puts it amidst some very serious competition, as you might expect. The similarly large PMC IB1S and the slightly smaller SP Acoustics SP25M three-way passive monitors are priced virtually the same as the Eve Audio offering, but both require an additional investment in power amplifiers. Comparable active monitors include the excellent Unity Audio Boulder (available in a bundle with Monolith stands for the same price as the Eve SC408), and I can't avoid mentioning the obvious rival of the Adam S4XH, of course. Smaller monitors of similar quality and price, which may be more appropriate in less-than-ideally-treated control rooms, include the Geithain RL904.

A very large and impressive full-range monitor that really lives up to that moniker. Superbly detailed and transparent, but without being fatiguing, although the genuinely flat response to 30Hz really challenges control-room acoustics.