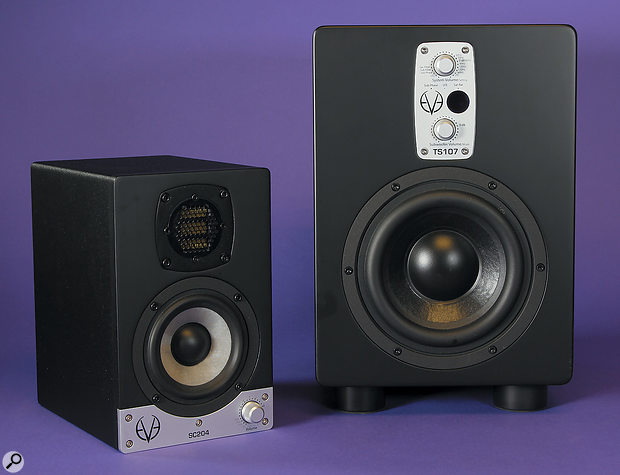 The 2.1 monitor approach may have its pitfalls, but there are also some very real benefits to be had, especially in small studios.

I’m generally wary of using speaker systems with subs in small rooms, as their extended low-frequency response can stir up some serious modal problems, resulting in noticeable peaks and dips in the bass response. Though I have to concede that there can be practical benefits from using 2.1 systems in such rooms where the sub doesn’t go down too low. One problem with small rooms, other than their typically uneven modal responses, is that ergonomics usually dictate where the speakers need to go — and that isn’t always the best placement for the most even bass response. Mid- and high-frequency problems are easy enough to sort out using absorbers, but bass treatment in small rooms is often impractical, or at least difficult to do effectively. By choosing a 2.1 system, the main speakers can go where you need them, while the sub can be placed in the position that produces the least lumpy bass response. So although with a small sub you may not get more low end than from a couple of mid-sized monitors, you may well end up with a more accurate overall sound.

The 2.1 system under review comprises Eve’s active two-way SC204 main speakers teamed with their TS107 sub (though the SC204s can be used on their own or with a different sub). The SC204s are the smallest monitors in Eve’s studio monitor range, measuring just 145 x 230 x 195 mm and weighing 3.8kg each. To provide more mounting options, there are threaded screw inserts on the bottom and the back for mounting on a mic stand or wall mount, though I’d always recommend a more rigid stand or speaker platform for the best results.

This ported monitor features a long-throw Eve SilverCone woofer built using a honeycomb diaphragm material, which is designed to be both light and rigid. This is driven by a one-inch voice coil. As with other Eve monitors, the highs, which reach 21kHz (-3dB) are looked after by an AMT (Air Motion Transformer) tweeter, power for which comes from a pair of 50W PWM (Pulse Width Modulation) amplifiers. Here the tweeters are protected by means of removable perforated steel grilles held in place by the tweeter magnets.

As with Eve’s larger monitors, the crossover (in this case, 3kHz), safety limiting and parameter adjustments are handled in the digital domain, using DSP electronics controlled via the front-panel rotary control. Conversion from the analogue domain is via Burr-Brown converters, and as the PWM amplifiers are directly connected to the DSP, no further conversion takes place. Input is analogue only and on balanced XLR or unbalanced phono, but there’s no option for a balanced jack input. Power is via the usual IEC socket, and mains cables are included.

As well as being used with a sub, the SC204s can also work on their own, at levels of up to 96dB SPL. They use bass porting to extend the low end performance down to 64Hz (-3dB), in this case via a wide rear slot-shaped port. User control comprises volume, high-shelf filter (-5dB to +3dB at 3kHz), desk filter boost (0dB to +3dB at 80Hz) and desk filter cut (-5dB to 0dB at 200Hz). There’s also a 300Hz low-shelving filter (-5dB to +3dB), with DIP switches for locking out the filter and level adjustments.

Adjustments are made via the rotary control on the front panel, which also incorporates a push switch and ring of amber indicator LEDs. Pressing the knob causes one LED to come on alongside the function to be adjusted, at which point turning the knob allows a different function to be selected. Pushing the knob again allows the knob to adjust the selected setting. After a few seconds the LED display reverts to showing the volume. If only the last LED in the ring is lit, the speaker is in standby mode, and automatically enters this mode if left unused for long periods. Note that the text surrounding the control is extremely small, so keep your reading glasses handy, but in most cases you should only need to adjust the settings once. 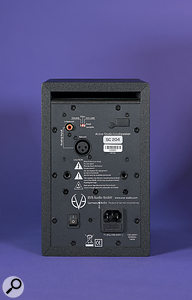 Apparently the ‘TS’ in TS107 stands for ThunderStorm, which is the name for this range of subwoofers. The TS107 is an active subwoofer with switchable satellite filters for full-range or 80Hz crossover, a polarity invert switch and variable subwoofer filter frequencies from 60 to 140 Hz. It has stereo balanced XLR inputs as well as balanced stereo outs to feed the main speakers. It also has connections for LFE in and LFE/sub out). In the 2.1 setup reviewed here, the stereo signal feeds the sub’s inputs, and the stereo outs feed the SC204s.

Once again, the power comes from a PWM amplifier, in this case 100W, where the forward-facing woofer is 6.5 inches in diameter and produces an overall frequency response of 33 to 300 Hz (-3dB) with a maximum SPL of 102dB at one metre. Rather than using a conventional ported box, this sub stands on chunky feet and employs a downward-facing passive radiator — a device very like a loudspeaker but with no voice coil or magnet. Passive radiators work in a similar way to a port, except that the air loading on the driver doesn’t disappear once you get below the port’s tuned frequency, as it does with an open port. There’s also no port noise due to air turbulence,as a passive radiator forms what is in effect a sprung seal across what would normally be the port aperture. Eve tell us that using a passive radiator allowed them to achieve a suitably low cabinet tuning while keeping the cabinet compact, at just 230 x 355 x 300 mm (and weighing 8.2kg).

The sub comes with an infra-red remote control that allows the overall system level to be adjusted, as well as the sub level, and for the sub’s polarity to be inverted. It is also possible to kill the sub, routing the full signal to the main speakers, and to tweak the sub’s upper range filter settings. Two rotary encoders on the sub’s front panel adjust volume and access/adjust the other parameters as an alternative to using the remote, and DIP switches on the rear panel again allow individual parameters to be locked. It is also pertinent to mention that both the mains and sub include the compulsory standby/low-power features specified by the EU, and when the system was first powered up, it was necessary to press the volume encoder switches briefly to bring the system to life.

Before going on to test these speakers I would also like to point out that all DSP speaker systems introduce a slight delay within the convertors and DSP processing sections. This is very small, typically around a couple of milliseconds, but it does mean that if you’re putting together a surround system you should use the same type of speakers, and not mix analogue and digital models. 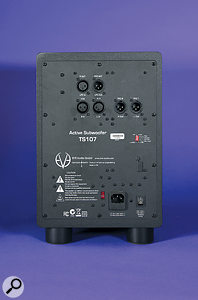 The TS107 has a comprehensive set of full-range and filtered I/O.

Once the system was coaxed out of standby mode, I was in a position to compare it with a pair of Eve SC207s (run without a sub), using a variety of familiar material. Initially I left the SC204s set to their default settings and bypassed the sub so that I could hear how they sounded on their own. Predictably, there was less deep bass than from the larger SC207s, but I also detected a change in how the upper mids were handled, with the SC207s sounding somehow a little more detailed and able to lift instruments out of the mix more effectively. Adding a dB of HF boost to the SC204s brought the mids and highs closer to the sound of the SC207s, but still I couldn’t quite match it. Then I removed the tweeter grilles on the smaller speakers, and immediately the sound seemed to open up revealing more detail but with a non-aggressive high end. There was also enough impression of bass to work stand-alone in a small or difficult room. So far then, I wasn’t disappointed.

Switching in the sub took some of the low-end load off the SC204s, and at the same time added a low octave that could be felt as well as heard. I have to say it integrated beautifully, and with the SC204s switched off I was surprised at how little sound the sub actually needed to produce to turn the SC204s into an effective 2.1 system capable of plenty of clean level. Indeed, the low end of the system had more depth than from the SC207s alone, and with (subjectively, at any rate) less bass ‘overhang’. The result was a tighter and deeper bass end that combined clarity with punch. It was also easy to find a sub position where the bass level stayed sensibly even in my own studio. The polarity invert setting gave the smoothest and tightest bass sound in my room, but your mileage may differ. Other than that, the default settings on the sub worked perfectly well.

Judged on their own merits,the SC204s are strong performers and an ideal choice for small studios that misbehave when fed a lot of low end. They have the detailed but non-fatiguing Eve family sound and even though you can’t feel the bass, there’s still a decent impression of depth. Having heard the difference those grilles made though, I’d advocate removing them!

Bring in the sub and these toddlers morph into adults, delivering effortless full-range sound with deep, well-controlled bass. Indeed, the lows are so extended that smaller rooms might again start to exhibit mode-induced ripples in the low end, but in my single-garage-sized control room the system worked perfectly. Even in smaller rooms, the ability to adjust the sub level and to move it around to find the best-behaved spot means that this 2.1 system might ultimately produce better results than a pair of typical seven-inch or larger full-range two-way speakers, where the total cost is also comparable. Less obvious is the fact that being able to switch out the sub and hear the SC204s working alone is almost like having two sets of speakers, making it easier to judge how well your mix will translate to smaller consumer systems.

There are many excellent small active two-way monitors from companies such as Equator, Presonus, KRK and so on and many of those should also work well with the TS107 sub if you already happen to own them. Dedicated 2.1 systems are also available from Blue Sky and others so there’s no shortage of choice, but if you like the Eve family sound, then the combination as reviewed is hard to beat and may be a better choice than a standard two-way speaker in an awkward room.

Whether used on their own or with the TS107 sub, the SC204s retain the Eve family sound, delivering a detailed sound that doesn’t cause fatigue after prolonged use. However, after hearing them with the sub you’ll be reluctant to use them without it.